“So this is the end of our race, I guess?” How Alonso’s luckless Australian GP unfolded | 2022 Australian GP team radio transcript

Fernando Alonso was the last driver to take the chequered flag at the end of the Australian Grand Prix.

But a little over 24 hours earlier this Alpine driver looked on course to pull off a major upset. Following a problem with his car in qualifying, he endured a luckless Sunday, as his radio messages relate.

Alonso set the timing screen alight with his first run in Q3, until he reached turn 11. There a hydraulic problem caused a failed downshift, pitching him wide and into a barrier.

The only upside was the lack of significant damage the gearbox meant Alonso’s car could be repaired without penalty. But a potential starting position on the first two rows turned into 10th on the grid.

With the soft tyres proving too fragile for a race stint and the mediums preferred by most drivers, Alonso was among the minority of drivers who opted to start the race on hard tyres. This promised to pay off if the race ran for a long time without a Safety Car period. 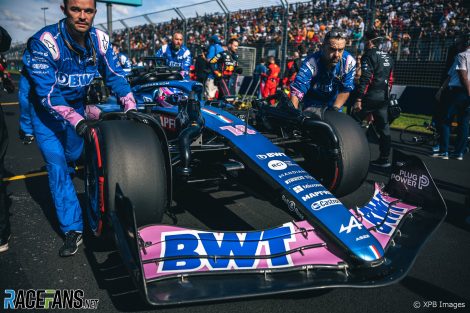 There was a brief interruption soon after the race started, when Carlos Sainz Jnr retired. He also started on the hard tyres, alongside Alonso, but got away poorly and soon spun into a gravel trap.

Alonso held 10th at this early stage. Further behind him last-placed Lance Stroll used the advantage of having no cars in his mirrors to get his mandatory tyre change out of the way. He pitted for medium compound tyres, did a lap, then had hard tyres fitted again, all behind the Safety Car.

But that wasn’t an option for Alonso, who was urged by race engineer Karel Loos to concentrate on keeping his tyre temperatures up behind the Safety Car ahead of the restart:

Lap Speaker Message 1 Loos You’ve got yellow turn 10 at the moment. 1 Loos Gap 0.7 behind. 2 Loos Careful with lift and shift between 13 and 14 please. 2 Alonso Okay. 2 Loos Virtual Safety Car, Virtual Safety Car. Your pit window is closed. 2 Loos So we’ve got a Virtual Safety Car for Sainz who’s stuck in the gravel exit of turn 10. Currently, you’re still P10. Let’s get straight onto keeping temperature in these tyres. 2 Loos Okay full Safety Car, Safety car, staying out, staying out. 3 Loos So only car stopped, Stroll gone hard to medium. Can we have b-bal 12, b-bal 12. 3 Loos Did you manage to get an initial feel for balance? 3 Alonso Not so much. Very low-grip. Still (unclear) I think. 3 Loos Yeah, copy. 3 Loos Go B-bal 11, please, B-bal 11. 4 Loos So just an update on a situation behind so Stroll boxing again, going back to the hard tyre. 4 Loos B-bal nine, B-bal nine. 4 Loos Let’s try to keep doing all we can to keep temperature in these tyres. 4 Loos Okay so Safety Car is in this lap. Suggest to do more weaving, more weaving. 5 Loos So for the restart just a few reminders. Reset your brake balance, which you’re just doing now – it will be recharge off for the restart. 5 Loos And no overtaking until the control line.

After the restart the race began to come to Alonso. Gradually those who started on the medium compound gave them up for hards, including those ahead, some of which reappeared behind him.

Having followed Pierre Gasly since the start of the race, Alonso sniffed fresh air for the first time after the AlphaTauri driver pitted. He reeled off consecutive laps of 1’24.7, 1’24.6 and 1’24.6 as he finally tapped into the pace of the surprisingly rapid Alpine.

8 Loos Okay so DRS enabled. 8 Loos Currently 0.9 behind Gasly, Tsunoda 0.8 behind you. 9 Loos Target plus two. 10 Loos Okay there might be some gravel around the exit of turn 11. 10 Loos Tyre update and update on status please. 11 Alonso Struggling a bit. Status zero. I try to overtake. 11 Loos Copy that. People on the mediums also struggling with tyres at the moment. 12 Loos Okay mate just a reminder we’re on plan A so need to be smart about this point at the moment. 13 Loos Just a reminder, try to do what we can about slip exit of turn 11. 13 Loos So just try the bottom-right for turn six. 13 Alonso Copy. 15 Alonso They are too slow now, they are too slow now. 15 Loos Copy that. Just for info car behind 2.5 is Bottas. 15 Alonso Locking up. I’ll be out of DRS just this lap. 15 Loos Copy that mate. Try to stay patient. 16 Loos So everyone boxing. 17 Loos Okay overtake available. Verstappen close at pit exit. 18 Loos Nice job mate. Suggest high-speed eight when you can, high-speed eight. 18 Alonso Very understeering. 19 Loos Okay understood. 19 Loos Fail bravo two zero off. Fail bravo two zero off. 19 Alonso Zero off? 19 Loos Two zero off, correct. 20 Loos Suggest trying shape one, shape one. 21 Loos Okay and behind Gasly just boxed. 21 Loos Exit 10 exit 10. 22 Loos Behind you Bottas boxed. Car behind you is Hamilton now, just stopped for hard tyres. 22 Loos Also behind Bottas has now stopped for hard tyres as well. Only one car left on the medium, which is Russell.

But it didn’t last. On lap 23 Sebastian Vettel spun into the barriers at turn four, bringing out the Safety Car.

With more than half the race still to run, Alonso knew his strategy was fatally compromised, as attempting to finish the remaining 35 laps on a set of the medium rubber was not realistic.

At the restart Alonso was in fourth place, but the Safety Car had brought his pursuer back within range, and he was swiftly demoted by the likes of Sergio Perez and Lewis Hamilton on their medium tyres.

23 Loos Can we have PU 13 position eight and watch out for debris where you are. 23 Alonso 13 position eight? 23 Loos Affirm, 13 position eight. 23 Loos So for the next stop just for info we’re taking out plus four turns total from the front wing. 23 Alonso Okay. Yeah, but I will be overtaken now, it’s going to be a mess. 23 Loos We’ve got margin for some brake warming. 23 Alonso It’s going to be a long one so you want to start now? 23 Loos Copy that, keep doing some weaving if you can. 24 Loos Can we have B-bal nine please. 24 Loos So correction can we go B-bal 12, please, B-bal 12. 25 Loos Safety Car in this lap. Let’s work these tyres as much as we can then reset your brake balance. It will be recharge off for the restart. 25 Loos So recharge off. 27 Loos So Perez 0.4 behind. 28 Loos DRS enabled. 28 Alonso Yeah. It will be impossible to hold it back 28 Loos Copy that mate.

Alonso clung to sixth for several laps while the McLaren drivers picked their way past Kevin Magnussen behind him.

He had just fallen into the clutches of the McLarens when Max Verstappen retired, triggering another Virtual Safety Car period. Alpine were just able to get him in for a pit stop during the brief delay, but he resumed out of the points in 13th.

28 Loos Russell 0.4. 30 Loos The car behind you now is Magnussen. He’s got same age tyre as you. 32 Loos You are three-tenths quicker than Magnussen behind. Magnussen behind fighting with Norris and Ricciardo. 33 Loos So car behind now is Norris, 2.6 behind. 35 Loos To Norris, 2.3, he did a 23.9. 35 Loos Time to gain compared to Norris is 12 and 13. 36 Loos How are the tyres? 36 Alonso Front-left gone. 36 Loos Okay, so when you can go exit 11, exit 11, and high-speed five. 36 Loos Norris now 1.1 behind. 36 Loos Overtake available. 38 Loos Safety Car window is open. Virtual Safety Car, Virtual Safety Car. So stick to your delta. And you’re happy with four turns on front wing? 38 Alonso I guess so. 38 Alonso Check if Norris overtook me at turn one under yellow. 38 Loos Yep will do. We are boxing this lap. 38 Alonso Okay box. 38 Loos You will come out in traffic so push at pit exit. 38 Loos Pit exit, can overtake until Safety Car Line Two. 38 Loos Okay. 38 Loos VSC ending, VSC ending. 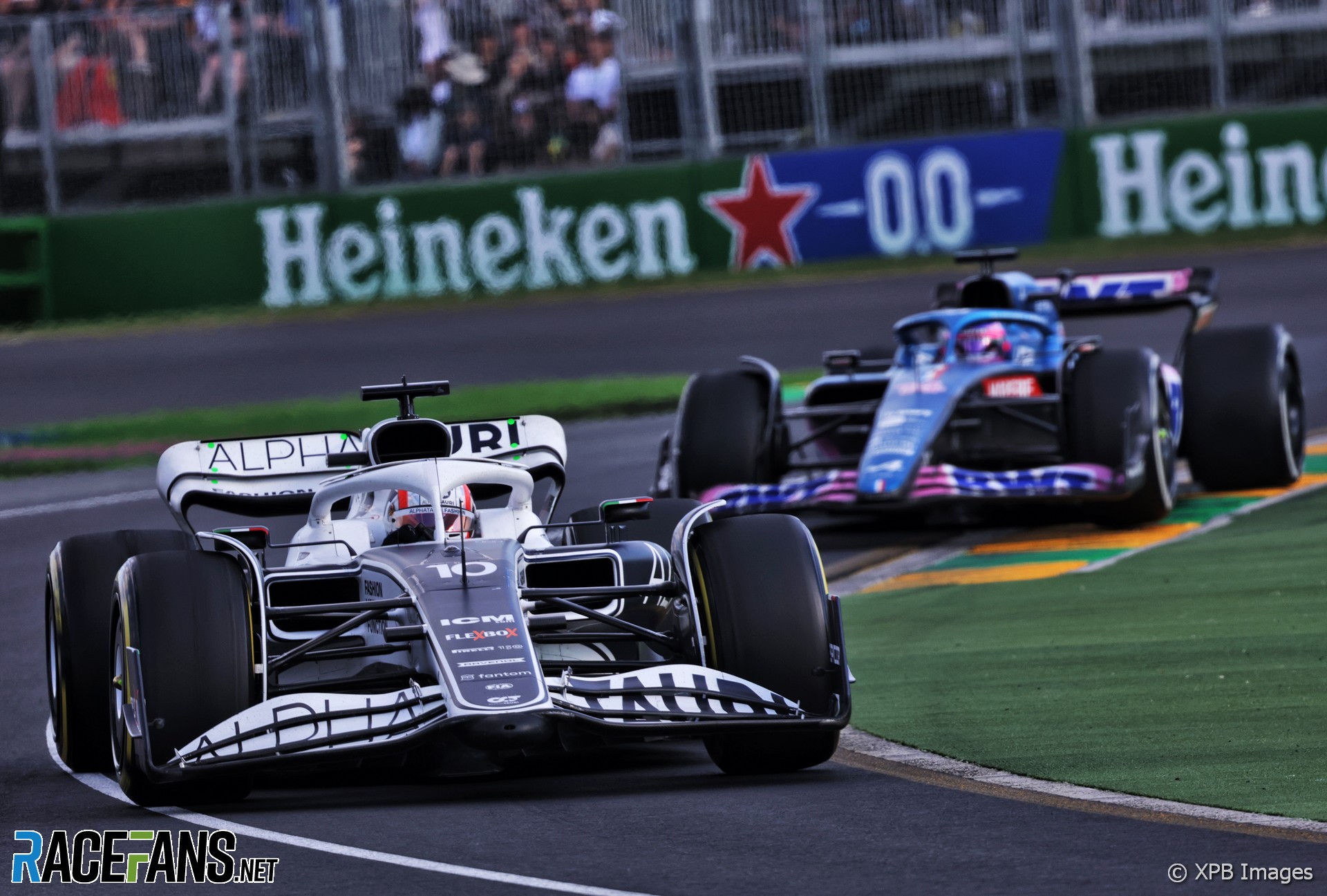 Alonso’s misfortune had left him behind, among others, Stroll, who now had Gasly in his mirrors. Alonso was mystified by the amount of time it was taking the AlphaTauri driver to clear the Aston Martin.

40 Loos 17 laps to go at the end of this lap. 41 Loos This train of cars is held up by Stroll in P9. 44 Loos Alonso passes Schumacher Nice one mate. 44 Loos So for further info Stroll ahead has a five second penalty. 47 Alonso Who is in the AlphaTauri? 47 Loos Gasly. 47 Alonso [Unclear] why he don’t overtake. 48 Loos Schumacher 0.4 behind. 49 Alonso [Unclear] 49 Loos Gasly has got past Stroll.

Now one of only two drivers on mediums, Alonso found his degraded quickly in the queue of traffic. Magnussen, the other driver on the same compound, appeared in his mirrors as Alonso was passed by Zhou Guanyu and sunk to 13th.

At this point he pitted for another set of mediums, seemingly in an effort to entertain himself with a bid for the fastest lap. Though by this point he was clearly doomed to finish outside the top 10 and therefore could not score the bonus point.

49 Alonso The front left completely gone. 49 Loos Copy. 49 Loos Mid one available, mid one. 50 Loos Zhou 0.4 behind. 50 Loos Car ahead of you now is Stroll. 50 Loos So reminder Stroll has a five second penalty and ahead Albon still needs to stop. 51 Loos So Magnussen 0.3 behind. 51 Alonso Yeah the front left [unclear] think what to do. 51 Loos Copy that. 52 Loos Okay mate we’re going to box this lap for another set of mediums. 52 Alonso Copy. 52 Loos So box this lap. 52 Loos Clear on pit exit. Perez about five seconds behind. 53 Loos Three laps remaining after this one. 53 Loos Perez at the moment doing 21.9. 53 Loos Solid blue for Perez behind. 53 Loos Got Russell and Hamilton still coming up behind. 53 Loos Solid blue for Russell. It’s back to flashing blue. 55 Loos Currently the fastest lap is 20.9. 55 Loos Solid blue for Russell behind. 55 Loos And next car behind is Hamilton, currently flashing blue for him. 55 Loos There’s a 21 second gap behind Hamilton. Solid blue now for Hamilton. 55 Loos SOC two available SOC two.

On his final lap Alonso produced a 1’20.846 which stood as the second-fastest lap of the day. Race winner Charles Leclerc had kept enough in hand for a late flier which ensured he did not lose the bonus point.

But for Alonso, a weekend which promised so much yielded nothing. Esteban Ocon in the other Alpine came home in the position Alonso’s strategist predicted he would have taken had it not been for an ill-timed Safety Car.

RaceFans is run thanks in part to the generous support of its readers. By contributing £1 per month or £12 per year (or the same in whchever currency you use) you can help cover the costs of creating, hosting and developing RaceFans today and in the future.