Carlos Sainz Jnr has welcomed the FIA’s revision of the Safety Car regulations in the wake of the controversial conclusion to last year’s world championship.

The Ferrari driver says he was disadvantaged by a decision, taken by FIA Formula 1 race director Michael Masi, to only allow a portion of the lapped drivers to unlap themselves ahead of the final restart during last year’s Abu Dhabi Grand Prix.

Sainz was running third at the end of the race behind leader Lewis Hamilton and Max Verstappen. Prior to the restart, Masi allowed the five lapped cars between Hamilton and Verstappen to rejoin the lead lap, giving Verstappen a clear run at Hamilton.

However he did not do the same for the two cars separating Verstappen from Sainz, driven by Daniel Ricciardo and Lance Stroll. Verstappen subsequently passed Hamilton to win the race and the world championship, which prompted a protest from Mercedes.

Following the FIA’s investigation into the controversy, F1’s officiating structure has been overhauled, and Masi moved out of the role of race director. This week the FIA published revised sporting regulations stating all lapped cars must be allowed to overtake the Safety Car prior to a restart, which had been common practice prior to Abu Dhabi.

Sainz welcomed the revision, noting he had been put at a disadvantage by the novel interpretation of the rules used in last year’s finale. 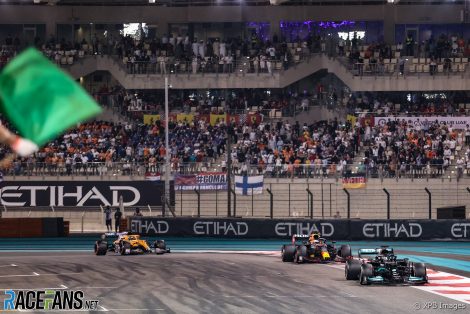 “I am a strong believer that if that example helped to make the Formula 1 rules better then so be it,” said Sainz in response to a question from RaceFans.

“I was affected by it. You guys know that it was a very unfortunate situation for me because I was probably fighting for my first win in that case and I had two cars in front of me that didn’t allow me to fight for that.”

This weekend’s race will be the first under F1’s revised officiating structure. The role of race director is now being rotated between two people, Niels Wittich and Eduardo Freitas, assisted by Herbie Blash and supported by a dedicated virtual race control division which has been likened to the Video Assistant Referee (VAR) used in football.

“I just think the FIA have taken the right step moving forward, that everything was understood and I’m happy to see everyone moving on and especially taking the right direction and decisions,” Sainz added.