F1 22 FAQ: Everything we know so far about the coming new F1 game | Gaming

The newest official F1 game for the 2022 season is rapidly approaching release at the end of June with new details about this year’s title having been revealed after the Miami Grand Prix.

Here are all the details about everything currently known about the newest game in the long-running official F1 game franchise. Including comments from the game’s senior creative director, Lee Mather, who spoke to RaceFans about the upcoming title.

When and on what platforms will the game be released?

F1 22 will arrive on PlayStation 4, PlayStation 5, XBOX One, XBOX Series S|X and PC on Steam, EGS and EA Origin.

The standard edition of the game will release on Friday 1 July, but players who purchase the ‘Champions Edition’ of the game digitally will be able to play from Tuesday 28 June.

Will the handling reflect F1’s new ground effect cars for this season?

Yes. Codemasters have spent the last couple of years working alongside FOM and Ross Brawn’s technical team to prepare the game’s physics model to emulate the different handling characteristics of the new 2022 F1 cars.

The game’s senior creative director Lee Mather told RaceFans that cars will feel “really different” to drive in F1 22 and will have to adjust how they approach kerbs and chicanes in the game to adapt to the new cars.

The tyre modelling has also been modified to try and more authentically simulate the new 18-inch wheels introduced for this season. 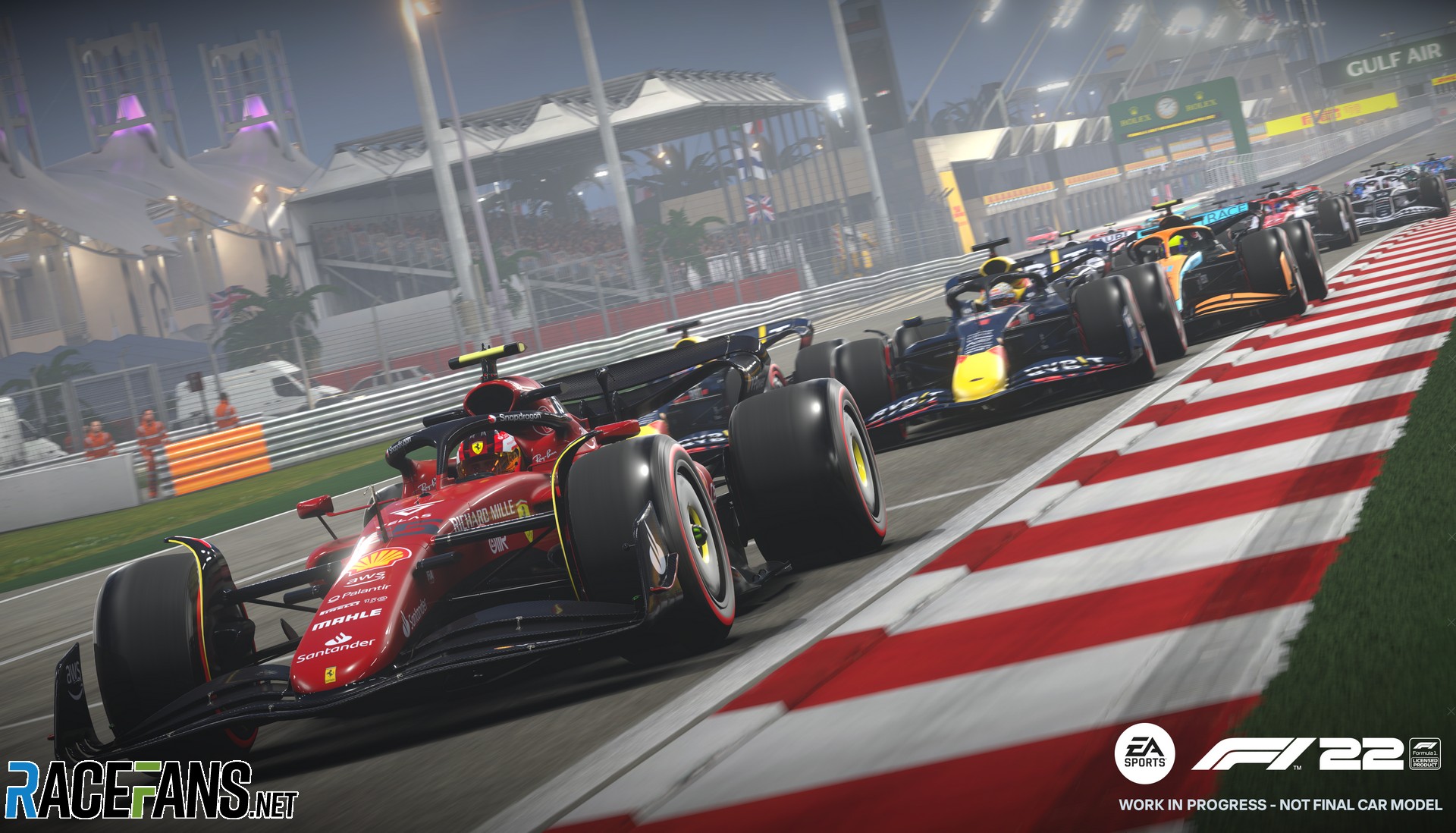 Porpoising is not featured in the game

Will porpoising be simulated in F1 22?

No. Mather has confirmed that the 2022 cars will not porpoise in the game.

Will sprint races be included?

Yes. After their omission in F1 2021, sprint races will be included in the game and career mode.

What new gameplay features have been introduced?

The core gameplay and game engine from F1 2021 will be used again in F1 22, but there are some minor enhancements introduced to this year’s game.

Players will now have the freedom to drive their car throughout the entirety of the formation lap, including manually stopping their car into their grid slot, rather than the AI taking over before joining the grid.

A new pit stop feature means players must also now manually time their turn in to their pit box during pit stops. Pit stops will be longer than optimal if players turn in too early or too late. AI rivals will also have the potential of making mistakes in pit stops.

An adaptive AI system will adjust the performance level of the AI between races to help players to find a level of challenge that is best for them.

What is the new broadcast mode?

New for F1 22 is the ‘broadcast presentation’ option, which offers a more streamlined gameplay experience.

By choosing the ‘broadcast’ mode, the formation lap will be entirely controlled by the AI, allowing players to watch a truncated formation lap from a TV style perspective before races. Under Safety Car deployments, the game will cut to a cinematic sequence which will then cut to just before the restart, rather than forcing players to manually drive multiple laps under Safety Car. Pit stops will also take place automatically from a TV style overview.

Players who want to drive the formation laps, Safety Car periods and pit stops manually can continue to do so by selecting the ‘immersive’ mode. 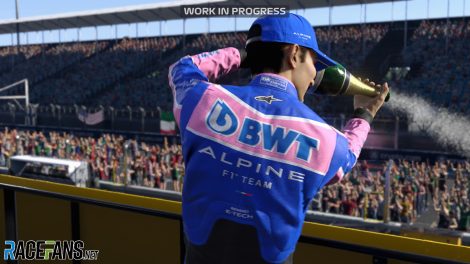 How has presentation changed this year?

Players will have the option to choose between Sky Sports F1 commentator David Croft or Channel 4 F1 commentator Alex Jacques to host the pre and post-race cinematics. Natalie Pinkham will also replace Anthony Davidson at certain races in the analyst role.

The new game also features a series of all-new animations, podium celebrations and other TV-style graphics packages to better emulate the current TV broadcast of the sport.

No, the ‘Braking Point’ story mode will not be featured in F1 22.

Do the MyTeam and driver career modes return and how are they different?

Yes. Both the driver career mode and MyTeam modes will return in F1 22. The co-op career made will allow players to race alongside or against a friend online.

Codemasters say that the department ‘events’ introduced to last year’s game – that presented players with dilemmas which they had to choose solutions for – will be “expanded” for F1 22.

In MyTeam, players will now choose from three different entry level statuses: Newcomer, midfield challenger or title contender. Each setting will affect the player’s starting finances, facilities and the quality of the team mate they are able to hire to their MyTeam.

Yes, but not all of them.

Last year’s game introduced ‘icons’ into the game that players could hire as their team mates in their ‘MyTeam’ career mode, including Michael Schumacher, Ayrton Senna, Alain Prost, Nico Rosberg and others.

Mather said all of the iconic drivers included in F1 2021 will return “minus one of them”, but confirmed that there would be new iconic drivers added into the game.

Former Red Bull driver Mark Webber recently shared images of his face being laser scanned for an undisclosed gaming project on social media, suggesting that the multiple grand prix winner may well be one of the new ‘icon’ drivers to be added to the new game. 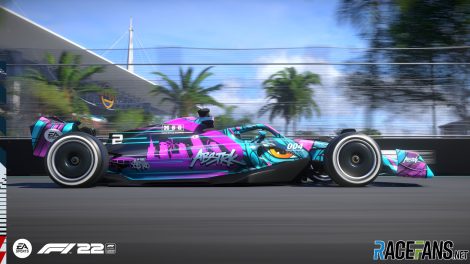 Have livery editing and customisation options been expanded?

Yes, but only slightly. Players will still only have the ability to edit the colours of preset designs for their own cars, however they will be able to select which paint finish style they want each section to have, choosing between gloss, matte, satin or metallic finishes.

There is a quality of life improvement in being able to copy colours from the swatch and paste them between different parts of the livery.

Will Formula 2, Formula 3 and classic cars be included?

Only Formula 2 will be featured in F1 22. The 2021 F2 season will be included at launch, while the 2022 F2 season will once again be added into the game after release. 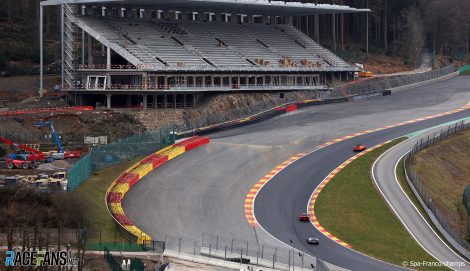 Renovations to Spa are “unlikely” to be included

Will all 2022 circuits be updated in the game?

Mostly. As well as the fully complete Miami International Autodrome, which will be available from the game’s release, F1 22 also features the circuit modifications to Albert Park, Circuit de Barcelona and Yas Marina that were carried out since 2021.

However, Mather does not expect that the extensive renovations to Spa-Francorchamps will be reflected in this year’s game.

“At the moment, I would say it’s unlikely,” Mather told RaceFans. “But it’s not something we’ll rule out to potentially look for a future update.

“Again, it was another one of those where we weren’t aware of them until quite late in the day and obviously once the changes finalised, we’ve got to create them. So we’ve obviously been very busy with the circuit team creating not only Miami, but they were doing all of the work for the other three circuits and they’re not small changes, they’re all very significant – especially to Melbourne, which have massively changed the character of the circuit.”

Will any additional circuits be added to the game beyond those on the 2022 calendar?

Possibly. Asked if Codemasters had any plans to include tracks from previous games in the series in F1 22, Mather replied: “I’m going to say… watch this space.”

Will the Podium Pass and PitCoins return?

Yes. The Podium Pass system will again be featured in F1 22 and will allow players to unlock customisation items for their car and driver, including items for their F1 Life avatar and player hub.

Players will again have two tiers from which they can unlock items, the free tier and the VIP tier, which must be unlocked through the purchase of PitCoin in-game currency. As ever, players who buy the deluxe ‘Champions Edition’ of the game will receive 18,000 PitCoins to enable them to buy the VIP tier for the first season of Podium Pass, which players can unlock more PitCoins for by progressing.

The biggest new feature for F1 22 is the F1 Life mode, which acts as a hub and additional form of customisation for players.

After creating their driver avatar, F1 Life allows players to unlock and customise their driver’s looks through clothing and accessories like watches and jewellery including items from real world fashion outlets. Players will also be able to customise their apartments with furniture and items and display trophies won in the game. F1 Life will also allow players to buy and race unlockable supercars within the game.

“F1 Life is a multiple things for us,” Mather explained to RaceFans. “It was a chance to really refresh the way that you first enter the game.

“It’s inspired by the glamour of the sport. Formula 1 drivers have wonderful looking apartments, we know that. They have great collections of supercars, that’s one of the reasons why we wanted to include supercars in the game. They’re collectables. They’re not paid for items – you earn them through gameplay and they go into your collection. You earn a token, you pick which one of the cars you want next. We want players to be able to have the cars that they particularly favour in their collection.”

The supercars unlocked in game can be used in a variety of events, including time trial, autocross challenges, checkpoint and pursuit challenges. 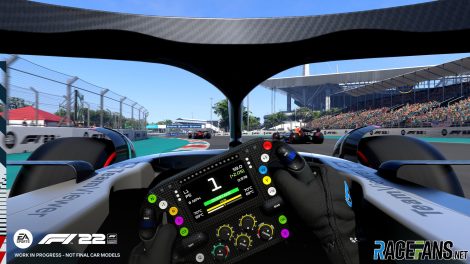 VR functionality on PC is featured

There will be no PSVR functionality on PS4 and there have been no plans announced yet to feature PSVR2 functionality for PS5 once the platform is released.

Who is the new race engineer who will support you over team radio?

After seven seasons as the player’s race engineer, ‘Jeff’ has called time on his F1 career and stepped aside to set up his own wood fired pizza kitchen back in his home town.

Stepping into the race engineer role for F1 22 is former McLaren mechanic and media personality Marc Priestley. Having worked with McLaren from 1999 to 2009, Priestley has plenty of experience as a former race engineer and will be speaking to the player over team radio this year. His lines have been recorded with the use of an actual F1 headset, to add a level of authenticity to radio comms from this season.

Will there be crossplay?

For the first time in the series, crossplay will be added to this year’s game. This will allow players to race each other online, no matter what system they play on. Allowing PlayStation players to race against Xbox players and PC players.

However, crossplay will not be available at launch and will be added to the game after release. As ever with most games that feature crossplay, players will be able to choose whether or not to match with players on other platforms online.

Are there any more features or details yet to be announced?

Yes. Mather has confirmed that there will be more information about the new game that will be announced ahead of release next month.