Alfa Romeo’s head of track engineering Xevi Pujolar says he did not understand why Antonio Giovinazzi refused to let his team mate past when told to.

Giovinazzi ignored two instructions to let Kimi Raikkonen pass him during the latter stages of Sunday’s race. Raikkonen was significantly quicker in the laps before he caught his team mate.

“We asked to swap positions but then at this point also Antonio was starting to pick up the pace and he himself decided that he wanted to stay ahead,” Pujolar explained. “And maybe that situation, this couple of laps, potentially we could have been faster as a team.”

Both drivers closed on Esteban Ocon, who was struggling on badly-worn tyres, on the final lap. Giovinazzi fell short of passing the Alpine for the final point by seven tenths of a second. “We needed one more lap to catch Ocon,” said Pujolar.

“For sure for the team that was not the not ideal,” he added. 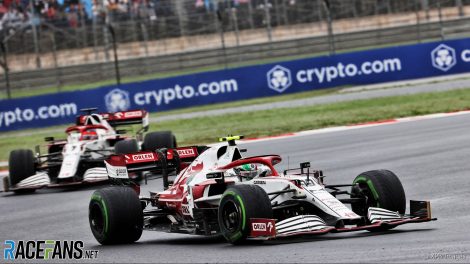 Giovinazzi was unable to match’s Raikkonen pace before he was caught. If he had let his team mate past, Alfa Romeo would likely have stood a better chance of scoring a point.

Pujolar pointed out they would have swapped their drivers’ positions back again if the chance had arisen. “I did not understand well why we could not swap at this point because also when we have got both cars then we can change it back depending on the situation,” he said.

Alfa Romeo are ninth in the championship, seven points ahead of last place and 16 behind Williams. “For us it’s important to achieve the points,” said Pujolar, who pointed out the team only made the call to swap their drivers when it became clear how the race was going to pan out as the track dried.

“At the beginning of the race we didn’t really focus so much on who is stronger, more or less both cars were there. We were managing, we didn’t know how long the conditions would remain like this, so we didn’t want to put too much stress or swapping positions and letting Kimi push hard and run out of tyres too quickly.

“So on that stage, we wanted to have a bit of space because nobody knew if it will be 20 laps, 30 laps or the whole race in inter[mediate] condition. But at the end of the race, it was a different story. At that point, yes, we wanted to swap position.”