In the round-up: Daniel Ricciardo says he isn’t rooting for either world championship contenders, but suspects one would be a more popular winner.

Verstappen would be popular champion – Ricciardo

Ricciardo, who was Max Verstappen’s team mate at Red Bull between 2016 and 2018, suspects he would be a more popular world champion this year than Lewis Hamilton, who has won the last four titles in a row.

“I think just kind of ‘may the best man win’,” said Ricciardo when asked whether he had a preference between either of the title contenders.

“The rivalry they’ve had this year has been pretty awesome, as a fan. I think they’ve left it all out there. So from that point of view, I think they are where they are, I think it’s fair at the moment in terms of they are nip-and-tuck. So no preference.

“I think obviously people do like to see like a fresh face, so maybe Max is the more popular vote because it would be a first title for him and it’s something new and exciting for everyone. So that’s always like you’ve got that feel-good story. 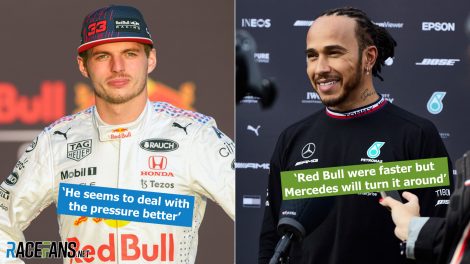 Feature: How do Hamilton and Verstappen’s rivals see their championship fight?

“But I think as long as no misfortune is involved, then I think the guy that wins is the one that’s going to deserve it.”

After announcing the longest F2 calendar in the 17-year history of the series and its predecessor GP2, CEO Bruno Michel says teams will be given assistance to meet the rising costs they face. While F2 will move from triple to double-header events next year, the number of rounds will almost double from eight to 14.

“A lot of circuits have expressed their interest to have our championship added to their race weekend programme, but for costs reasons, we cannot increase the number of rounds more than we already have,” said Michel. “This calendar will of course induce an increase of our teams’ budgets, but we will support them so that they are able to manage the extra costs.”

Ricciardo will have his promised run in team CEO Zak Brown’s ex-Dale Earnhardt 1984 Chevrolet Monte Carlo NASCAR at next week’s United States Grand Prix at the Circuit of the Americas. Brown promised Ricciardo in the run as a prize for his first podium finish for the team, which he achieved with his victory in the Italian Grand Prix.

"Mayer declined to comment on the progress of the takeover talks but told the Financial Times Business of Sport Summit that broadcast rights for the Premier League, Champions League and Formula One 'are the things we’re keenest on'. He added: 'In Europe, what matters most in most territories are football rights, but motor sports are also very popular. We go after top-tier rights that engage local audiences.'"

"Despite competing in just two rounds so far this season, reserve driver Abbi Pulling (Puma W Series Team, GBR) could qualify automatically for next year when she races at COTA. The 18-year-old is 12 points behind eighth-placed driver Belen Garcia (Scuderia W, ESP) having finished eighth on her debut at Silverstone in July and seventh at Zandvoort last month."