Three drivers are under investigation for allegedly failing to respect yellow flags at the end of qualifying for the Qatar Grand Prix.

Max Verstappen, who qualified second for tomorrow’s race, has been summoned to appear before the stewards for “not respecting double waved yellow flags” during his final lap in Q3.

Valtteri Bottas, who took third on the grid, is also investigation, but for an incident involving single waved yellow flags. Carlos Sainz Jnr, who took seventh, is under investigation for the same.

All three incidents occurred when yellow flags were waved at the end of the session after Pierre Gasly damaged his car on a kerb at the exit of turn 15. The AlphaTauri driver lost his front wing and came to a stop on the pit straight. Yellow flags were briefly shown, then cancelled, in marshalling sectors 18 and 20.

Onboard footage from Verstappen’s car showed a yellow flashing light on his left at the exit of the final corner, turn 16, as he completed his final lap. The Red Bull driver did not appear to lift off. 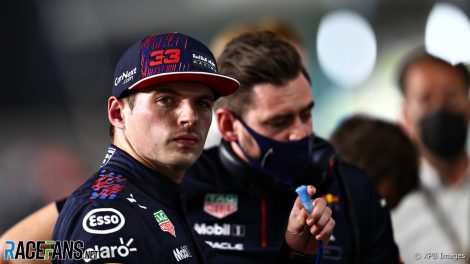 Analysis: What penalties are Verstappen, Bottas and Sainz at risk of in Qatar?

Mercedes team principal Toto Wolff said he had seen the footage of the Verstappen incident. “He’s passing a flashing red or flashing yellow light on the left and then is passing a double waved yellow and there is a standing car on the road. So I guess that’s a bit of a triple-whammy.”

In 2019 Verstappen lost pole position for the Mexican Grand Prix after he was found not to have slowed for yellow flags. He was given a three-place grid penalty.

Last year Lewis Hamilton was given a three-place grid penalty in Austria for the same violation. On that occasion Red Bull successfully petitioned the stewards to review a decision not to penalise him after presenting new video evidence.

The stewards will not meet with Verstappen until 1pm on Sunday in Qatar, four hours before the start of the race. The meetings with Bottas and Sainz will follow at 1:30pm and 1:45pm respectively.