Perez said Red Bull’s Sao Paulo Grand Prix was hampered – and their rival Mercedes’ helped – by the timing of a brief Virtual Safety Car to remove debris from the track.

Carbon fibre had been strewn across Interlagos following a collision between Lance Stroll and Red Bull junior Yuki Tsunoda, resulting in first a full safety car period, then a second, shorter virtual one, during which time Valtteri Bottas was able to pit, putting him ahead of Perez.

“We were extremely unlucky,” said the Red Bull driver. “There was nothing we could have done differently with the Virtual Safety Car, we just got very unlucky and unfortunately, that helped Mercedes to undercut with Bottas.”

Sainz: Ferrari “need to analyse” cause of poor start

Having made an excellent getaway during sprint qualifying, Carlos Sainz Jnr was dismayed by his poor start in Sunday’s Sao Paulo Grand Prix. The Ferrari driver banged wheels with Lando Norris on the way to turn one, leaving the McLaren driver with a puncture.

“The only problem was at the start, I shouldn’t have been fighting Lando to be honest, because my start was really, really poor,” Sainz admitted. “We need to analyse what happened because I think the procedure from my side was pretty much spot on, but for some reason we don’t understand we triggered a lot of wheelspin.

“So there must have been something with the clutch or the tyre, that was really unexpected that we will review tonight.”

Norris initially pointed the finger at Sainz for their lap one collision but on reflection admitted he was “not happy” with his manoeuvre on the Ferrari.

The McLaren driver said he made “an amazing start, to get ahead of Carlos so quickly” before the pair made contact.

“[I] was just a bit eager to get back onto the track and the angle I came back on was a bit too much and then just got unfortunate with a puncture,” he said, having reviewed onboard footage. “So that was tough. I made my race a lot harder than it should have been.

“We lost a lot of points because of it, but I still had a good fight and managed to get back to P10 and get one point at least, so better than nothing. But it should have been better today so I’m not happy with myself. But the team did a good job with the strategy and everything else.” 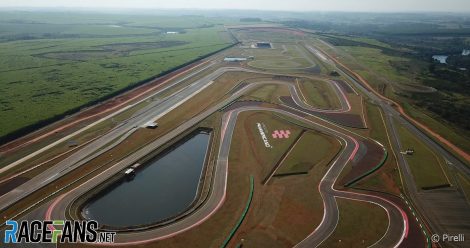 The venue offers seven different track configurations. It has been used for Formula 3 and stock car testing as well as road car tyre development.

“It was fascinating to visit the Circuito Panamericano, a very technological track where Pirelli tests road car tyres, making the most of its expertise learned on the F1 track,” said Domenicali. “Today I got the chance to learn how the sporting activity in F1 has a direct relevance to the tyres we all drive on the road every day.”