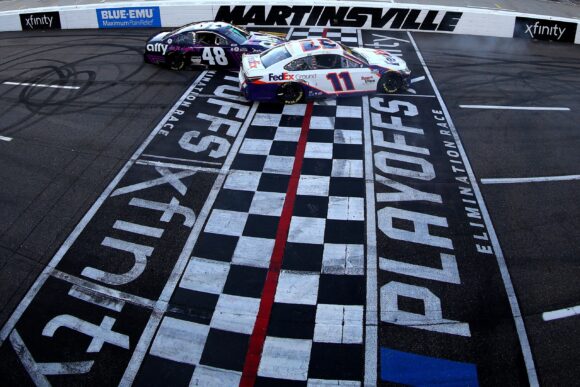 This weekend’s Xfinity 500 NASCAR Cup Series race at the Martinsville Speedway will again serve as the deciding contest that will determine the Championship 4 going into the season finale in Phoenix.

In past years this particular race on the paper clip-shaped half-mile track has produced some epic moments such as when Denny Hamlin and Chase Elliott clashed in 2017 or when Kevin Harvick desperately tried to stay alive in the NASCAR Playoffs by spinning Kyle Busch on the last lap in 2020. And don’t forget the incident between Alex Bowman and Denny Hamlin last fall.

This event has provided its share of “water cooler” moments giving fans something to discuss the next day when they gather at in their work places.

But can this year’s race live up to those previous events?

The potential problem could come from the Next Gen car and its initial visit to the Virginia facility back in the spring of the year. That race proved to be less than thrilling or eventful. As an attendee who sat in the bitter cold with snow flakes falling prior to the scheduled start time, my hope was that the miserable conditions endured would be worth it for me and my sons in the end. Unfortunately, there was little to get excited about at any point in the race. 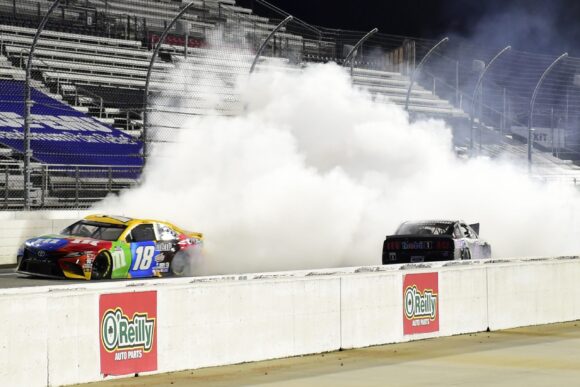 A last lap incident involving Kyle Busch and Kevin Harvick had people talking about the Martinsville race in 2020. (Getty Images)

The only lead changes in that spring race occurred as a result of pit stop exchanges or stage breaks. Hendrick Motorsports teammates William Byron(winner) and Chase Elliott led a total of 397 of the 403 laps contested. Cars passing each other for position was not a common sight and even a late race caution that set up a green-white-checkered finish did not provide anything to talk about on the ride home.

Some suggested that the lack typical Martinsville-type action was the result of the new car and its differing setup and better braking ability that caused cars to separate from each other rather than bunch up. Whatever the case, the Blue Emu 400 will not go down as one of the most memorable races in NASCAR history.

The obvious problem with that event is the possibility that it could happen again at a highly inopportune time. Martinsville was selected as the penultimate race on the NASCAR Cup Series schedule, the race that would ultimately decide the drivers who will make up the Championship 4, because it is a track noted for excitement and a location for rivalries to play out. The sanctioning body wants there to be drama so what happens if the lead-in race for the title deciding event doesn’t give people something to talk about?

Have the sport’s drivers and teams learned enough about the new car’s setups and other characteristics to make it more competitive on a track that had once been known for the kind of excitement NASCAR wants for this race? No doubt, NASCAR along with its media partners hope this event will provide more of those “water cooler” moments this track has come to be known for.

The Xfinity 500 is supposed to serve as an exciting precursor to the championship finale. It is supposed to give something for fans and media to talk about during the week leading into the Phoenix race. If the race turns out to be no better than the one held here in April, there won’t be much discussion.

Devin Moran set to drive for Double Down Motorsports in 2023