SjaakFoo commented on the post, Haas wants more points from Schumacher after crashes "cost a fortune"

Haas F1 Team owner Gene Haas says Mick Schumacher “needs to bring some points” if he is to keep his seat at the team into 2023.

Schumacher has raced with Haas for the last two seasons but is currently out of contract for 2023. He sits 16th in the drivers’ championship with 12 points – just over half the total of team mate Kevin Magnussen.

Speaking to the Associated Press during Sunday’s NASCAR Cup race in Las Vegas, Haas said that Schumacher’s future with the team “is going to be decided by Mick.”

“We need Mick to bring some points and we’re trying to give him as much time as possible to see what he can do,” said Haas.

“If he wants to stay with us, he’s got to show us that he can score some more points. That’s what we are waiting for.”

Schumacher suffered two heavy crashes early in his second season at the team in Jeddah and Monaco. He crashed again in the last round at Suzuka, spinning into a barrier while driving back to the pits at the end of a wet first practice session. 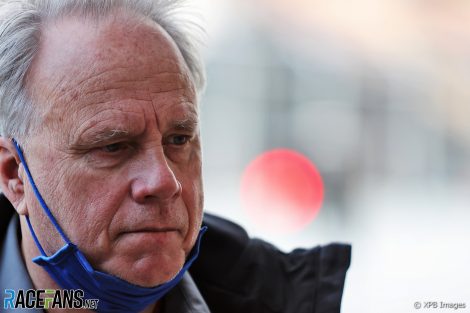 Schumacher’s crashes are “too expensive” for Haas Haas admitted he is concerned about the crashes Schumacher has had. “In this sport, being kind of a rookie driver, the sport just doesn’t allow it — it’s just too expensive,” Haas said of Schumacher’s rate of accidents. “If you make any mistakes in driver selection, or strategy, or tyre selection, it is costing you millions of dollars.”

He believes that Schumacher has the ability to succeed in Formula 1, but his performance so far this season has not been good enough for him to look past Schumacher’s mistakes.

“I think Mick has got a lot of potential, but you know he costs a fortune and he’s wrecked a lot of cars that have cost us a lot of money that we just don’t have,” Haas said. “Now, if you bring us some points, and you are [Max] Verstappen and you wreck cars, we’ll deal with it. But when you are in the back and you wreck cars, that’s very difficult.”

Asked if Schumacher will have the final four rounds of the season to make his case to remain with the team, Haas said: “well, if he wins the next one, he’s in. Somewhere in between there is a grey area.”

Haas is one of two teams yet to confirms its 2023 F1 driver line-up, the other being Williams.