ryanoceros commented on the post, Where could F1 race if it replaces the cancelled Chinese Grand Prix?

The most surprising thing about the cancellation of the Chinese Grand Prix is that it was ever on 2023 Formula 1 calendar to begin with.

Before next year’s record-breaking 24-race schedule was announced, F1 CEO Stefano Domenicali indicated a decision on the return of China’s race would not take place until after October, when the ruling Communist Party’s National Congress would take place.

At the time many outside China wondered whether the party’s president and China’s leader Xi Jinping would use the occasion to announce an easing of the country’s strict ‘zero Covid’ polices, under which it continues to impose lockdowns in response to outbreaks. He did not, and the country is now struggling to keep a lid on protests against the severe measures which have lasted for three years.

The cancellation of F1’s 2023 race in Shanghai was therefore widely expected. China’s only F1 driver, Zhou Guanyu, told RaceFans last month he had doubts the race would go ahead once he learned it had been given an April date. Shunting it later in the season would have widened the window to make it happen, but that end of the calendar is so congested there’s little room for manoeuvre. Istanbul returned to the F1 calendar in 2020 Others plainly drew the same conclusion and F1 has already begun assessing alternative venues which could take China’s place. But finding a viable option for the April 16th date may be tricky.

Portugal’s Autodromo do Algarve was one of the first tracks to be named as a potential venue. It was one of a clutch of venues which was pressed into service at short notice when the pandemic struck in 2020. F1 returned to the track outside Portimao for a race on May 2nd last year in soggy, cool conditions. A mid-April return could be viable.

The same could also apply to the Paul Ricard circuit which was dropped from the calendar after this year’s race. F1 has visited the circuit in the south of France this early in the season before: Its 1983 race was held on April 17th.

Another track which was added to the calendar due to Covid may be an option. Like Algarve, Istanbul Park in Turkey was resurfaced for F1’s return in 2020 and hosted the series again in 2021. But it’s never held a grand prix earlier than May, and average temperatures in the area are a little cooler than the French and Portuguese tracks, which may prove off-putting. 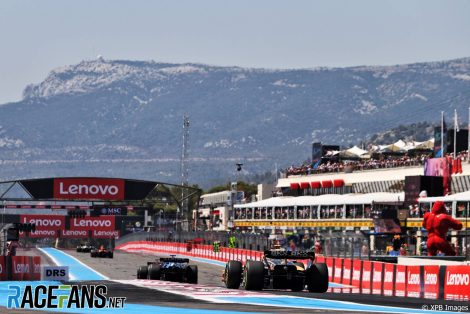 Paul Ricard has held an April race before The other two venues also have the advantage of being closer to teams’ bases and therefore are easier to travel to. The viability of other venues will depend on how eager F1 is to restore its 24th round – 23 races will still be a record-breaking schedule – and whether it would prefer to make the saving on travel instead.

One neater solution might be to add a race as a return stop after the Australian Grand Prix on April 2nd. But a suitable venue would need to be found. Malaysia’s Sepang International Circuit seems a viable option, but the venue has cooled on F1 since holding its last race in 2017.

South Africa was a candidate for a race on the 2023 calendar and the continent remains a target for F1. But even if the other obstacles to returning to a track which held its last race three decades ago were removed, Kyalami would be a more challenging venue to incorporate within the calendar than nearer options.

Each possibility involves some compromises. But there remains the possibility F1 won’t choose any of them. If it embarks upon next season without a replacement the series will have a four-week gap between the championship’s rounds in Australia and Azerbaijan: a ‘spring break’ to go along with the summer and winter hiatus. Given the packed schedule which follows it, many teams might welcome that.