The FIA condemned Russian kart racer Artem Severiukhin for his “reprehensible” behaviour after he was accused of performing a Nazi salute at an FIA karting event in April.

Severiukhin was disqualified from the event, losing his victory in the OK category at round one of the 2022 FIA Karting European Championship.

The FIA barred drivers from entering its events under Russian licences after the country invaded Ukraine in February. Severiukhin entered the karting round at the Kartodromo Internacional do Algarve in Portugal using an Italian licence.

Prior to the event he signed the FIA’s Driver Commitment which applies to Russian competitors and includes an undertaking to “not make any statements or comments, take any actions, or conduct myself in a manner that is prejudicial to the interests of the FIA, any competition, and/or motorsport generally.”

However the FIA stewards began an investigation after video appeared of Severiukhin raising his right arm during the post-race performance of Italy’s national anthem.

Following the investigation on April 22nd the stewards ruled Severiukhin had violated five clauses of the International Sporting Code, including the prohibition of “public incitement to violence or hatred”.

The stewards noted they “received after the competition a report from the FIA Karting race director and a report from the FIA Karting media coordinator regarding the facts that happened during the prize giving podium with [Severiukhin] whose behaviour can be considered as the ‘Nazi salute’. The stewards also received a video that clearly shows the behavior of the driver.”

Severiukhin posted a video apologising for his behaviour and the stewards noted his expression of regret. However they stated: “After hearing the entrant and the driver and check[ing] the video evidence, and even if the driver expressed his deep regret for his inappropriate gesture during the podium ceremony, the stewards consider this type of behaviour unacceptable and strongly reprehensible and against all motorsport regulatory standards.”

They confirmed their decision was “disqualification [from] the competition.”

Shortly after footage of the incident appeared Ward Racing announced they had dropped Severiukhin from their team. They condemned his actions “in the strongest possible terms” and described them as “a manifestation of unsportsmanlike behaviour [and], an unacceptable violation of the ethical and moral sports codex.”

Severiukhin has taken no further part in the series. His disqualification promoted Tony Kart driver Joe Turney to victory in Portugal. 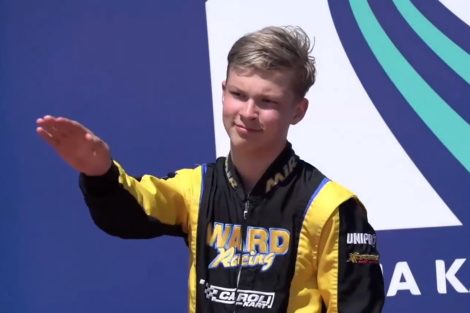 Severiukhin “caused moral injury” to the FIA, stewards ruled The FIA stewards’ verdict on Severiukhin ruled he violated its Driver Commitment as well as “Articles 12.2.1 c) d) e) f) m) of the 2022 FIA International Sporting Code”. These are:

(d) Any pursuit of an objective contrary or opposed to those of the FIA.

(e) Any refusal or failure to apply decisions of the FIA.

(f) Any words, deeds or writings that have caused moral injury or loss to the FIA, its bodies, its members or its executive officers, and more generally on the interest of motor sport and on the values defended by the FIA.

(m) Any public incitement to violence or hatred.