George Russell battled his way to victory in the third and final F1 Sprint of the 2022 season in Brazil, ahead of Ferrari’s Carlos Sainz and Mercedes team mate Lewis Hamilton, ensuring that he will start the Sao Paulo Grand Prix from first place.

Friday’s rain-hit qualifying session set the grid for the Sprint, with Haas driver Kevin Magnussen claiming a shock pole position to start in P1 ahead of Max Verstappen’s Red Bull, the Mercedes of Russell and McLaren man Lando Norris.

After the paddock had caught its breath from the drama, the main pre-Sprint question surrounded which tyre compounds drivers and teams would opt for across the 24 laps – or 100km – of racing. Who would go with the softest tyres, and who would play it safe on the mediums?

As the tyre blankets were removed on the grid amid bright and warm conditions, those questions were answered. Intriguingly, Verstappen was one of only two runners to opt for mediums, along with Williams driver Nicholas Latifi, with the rest going for the red-marked softs.

When the lights went out, Magnussen put his soft tyres to good use as he bolted off the line to defend his pole position advantage over Verstappen, who came under intense pressure from Russell through the opening sequence of corners, but just managed to hold on to P2.

Behind, Sainz came close to pulling a move on Norris, who was still feeling under the weather after his bout of suspected food poisoning, while Alpine pair Esteban Ocon and Fernando Alonso went wheel-to-wheel and made contact at Turn 4, before another close moment on the pit straight, which will be investigated by the stewards.

“I lost the front wing, thanks to our friend. He pushed me in Turn 4, and then on the straight,” said Alonso in a pair of frustrated radio messages, as he pitted for repairs. Speaking to Sky Sports F1 from the Alpine pit wall, team boss Otmar Szafnauer admitted Ocon “could have given him a bit more room”.

Having failed at the first attempt, Sainz cleared Norris into the Senna Esses at the start of Lap 2, with Verstappen again forced to carefully place his car to keep Russell – on the softer rubber – at bay as Magnussen logged the first lap Haas have ever led in F1.

Magnussen’s time at the front would be short-lived, however, as Verstappen built up some more temperature in his tyres to close in and breeze past along the main straight on Lap 3 – Russell and Sainz following suit one tour later.

Further back, Hamilton, Sergio Perez and Charles Leclerc set about making up for their low-key qualifying results by picking off a host of rivals over the opening laps to run P4, P5 and P6 respectively, further demoting Magnussen.

After the scrap between the Alpine drivers, another battle of the team mates saw Lance Stroll pick up a 10-second penalty for an aggressive defensive move against Sebastian Vettel on the run between Turns 3 and 4, which forced the German to take to the grass.

Back up front, it was Russell’s turn to attempt a pass as he got within DRS range of Verstappen, who was struggling to make his medium tyres work, prompting several side-by-side moments between the pair as the Sprint reached half-distance.

After an initial try on Lap 12, and a slight delay to his attack when Alex Albon parked up his Williams, Russell eventually edged ahead of Verstappen on Lap 15, getting in the Red Bull’s slipstream out of the Senna Esses and expertly positioning his car around the outside of Turn 4.

READ MORE: Piastri and Gasly to run for McLaren and Alpine at post-season Abu Dhabi test after teams reach agreement

From there, Verstappen dropped into the clutches of Sainz, who muscled his way past the Dutchman into Turn 1 on Lap 19, only for the rear of the Ferrari to clip Verstappen’s front wing mid-corner, inflicting damage that also opened the door for Hamilton to get ahead.

Russell kept his composure up front to bag the Sprint win, and P1 on the grid for Sunday’s Grand Prix, with Sainz managing late tyre degradation to beat Hamilton to P3 (albeit prior to his five-place engine grid penalty), with Red Bull pair Verstappen and Perez in fourth and fifth respectively. 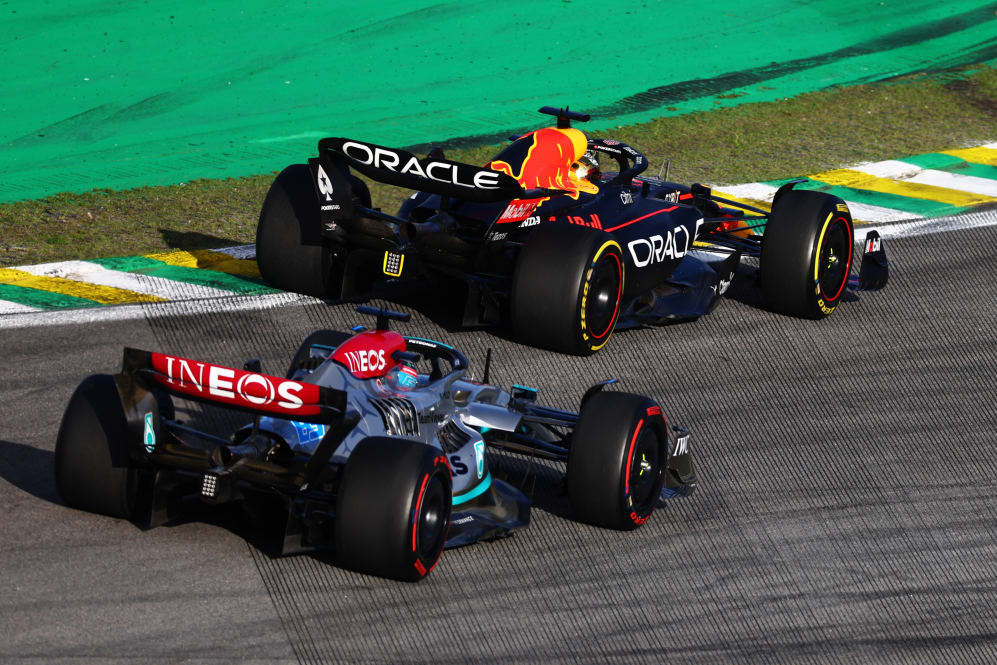 Leclerc managed to make his way up to P6 after his qualifying struggles, with Norris also getting in front of Magnussen, who claimed the final point on offer under the revised Sprint scoring format for 2022.

Vettel was ninth after his run-in with Stroll, followed by the lead AlphaTauri of Pierre Gasly, McLaren’s Daniel Ricciardo, the other Haas of Mick Schumacher and squabbling Alfa Romeo pair Zhou Guanyu and Valtteri Bottas.

Hamilton, Ricciardo and Zhou are all set to be investigated after the race, with potential start procedure breaches being flagged, meaning there could yet be a change to the points-scoring positions if the Mercedes driver is penalised.

Alonso took a lowly 15th after his incidents with Ocon and trip to the pit lane, as Yuki Tsunoda (AlphaTauri), Stroll, Ocon and Nicholas Latifi (Williams) completed the order – Albon being the sole retirement.

However, the stewards later ruled that Alonso had been at fault for the second incident with Ocon, handing him two penalty points and a five-second time penalty the dropped him to P18 on the grid for Sunday’s Sao Paulo Grand Prix – Tsunoda, Stroll and Ocon all moving up a place.

“It was incredible. I wasn’t expecting to have that much pace, but I think it goes to show all the hard work everybody is putting in and the progress we as a team have made. These last three races since Austin, the car has been feeling really great. Obviously it’s difficult to know how Max would have got on had he been on the soft tyre, but nevertheless, standing here is a great feeling,” said Sprint winner Russell.

“It’s crazy to think that both [Mercedes cars will be] starting on the front row. Lewis did a great job coming from P8, so it’s going to be exciting. I’m sure Max is going to be flying tomorrow, coming through the pack, but we are in a luxury position that we can maybe split the strategy and go for the win.”

Russell’s decisive move for the lead on Lap 15 of 24 as he got a run on Verstappen exiting the Senna Esses and went around the outside of his rival at Turn 4. 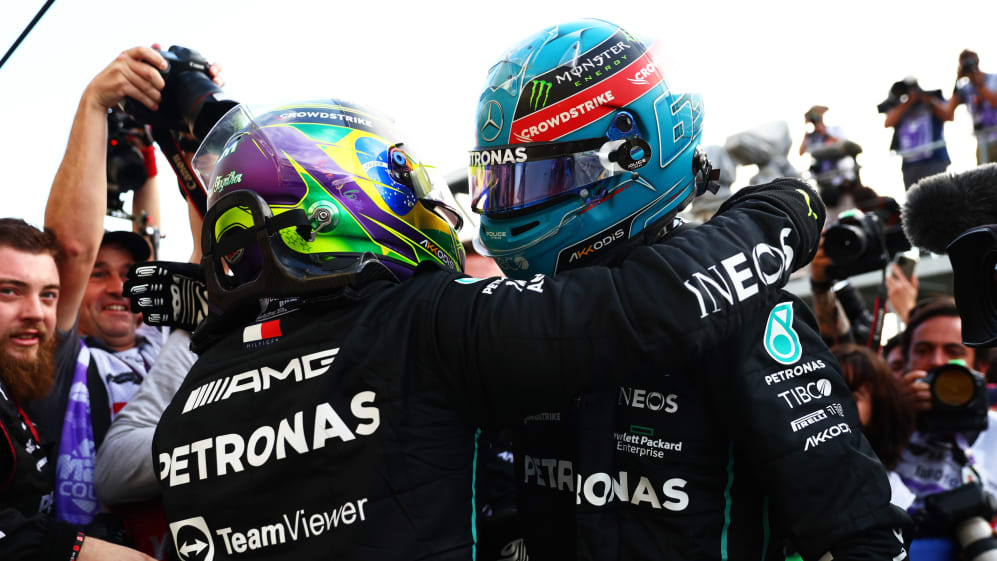 While Magnussen made the qualifying headlines, team mate Schumacher made up the most places in the Sprint, gaining eight spots from his P20 starting position. Hamilton was next on the list, as he climbed five positions from P8 to P3, which becomes P2 for the Sao Paulo GP after Sainz’s penalty.

The Alpines were the biggest losers after their clashes, Ocon falling from P6 to P17, as Alonso ended up a penalised P18 – a drop of 11 spots apiece – with Albon (dropping nine places as he retired) and Magnussen (down seven spots) the others to lose significant ground.

Drivers and teams will now switch their focus to the 71-lap Sao Paulo Grand Prix, which is scheduled to get underway at 1500 local time on Sunday. Visit the dedicated RACE HUB for more information.