Roger Ayles commented on the post, Should the FIA only accept new teams with existing racing pedigree into Formula 1?

Even since Manor left the Formula 1 grid at the end of the 2016 season, there have been only ten teams making up the grand prix grid over the last six seasons.

That will remain the case heading into 2023 and likely into the next few seasons too, but fans’ hopes of an expanded grid were raised this week when FIA president Mohammed Ben Sulayem announced the governing body would launch an expressions of interest process to assess potential new entries into Formula 1.

Andretti wasted no time in throwing their hat into the ring by announcing they would partner with GM brand Cadillac to launch a bid to enter Formula 1. While Andretti’s interest in wanting to join the world championship was widely known, a tie-up with an American brand like Cadillac appeared to only add further legitimacy to their campaign. 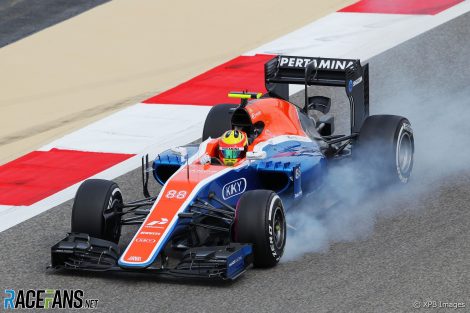 Manor, who joined in 2010, fell off the grid after 2016 But Andretti are by no means the only party interested in joining the grid. Canadian billionaire Calvin Lo has spoken widely of his interest in establishing a new team in recent months, while businessman Salvatore Gandolfo and his Monaco Increase Management firm have been eyeing an attempt at joining Formula 1 since before the pandemic.

However, with interest in joining Formula 1 for the new power unit formula in 2026 at its highest level since four new teams were granted entries for the 2010 season, there are naturally those inside and outside Formula 1 who are concerned about the viability of any brand new teams who join the grid. Especially as all four new entries for 2010 either collapsed or failed to even make the grid entirely.

So should Formula 1 and the FIA only accept new entries from teams who already have an active racing pedigree in other series or forms of motorsport?

Formula 1 is supposedly the pinnacle of motorsport. However, its history is filled with teams who were granted entries into the sport and struggled to even qualify for races, let alone race. Almost always, none of those teams ever get out of the doldrums and end up falling by the wayside.

If the FIA is serious about expanding the grid, then it needs to ensure that it will do with only with teams that have the resources, the experience and the calibre to compete at a competent level, let alone succeed. It’s no coincidence that Haas, the last new team to join Formula 1, remain on the grid after joining F1 with a history of success in North American motorsport.

With so many formidable teams and manufacturers with racing pedigree racing in other international motorsport series or even junior single-seater formulae, the FIA can limit the risk of any new teams disappearing off the grid after only a handful of seasons by being selective about the teams they select to join Formula 1.

Having an established motorsport pedigree is in no way an guarantor of a successful entry into Formula 1. Back in 2010, Adrian Campos of Campos Racing helped to found the F1 team that would eventually become HRT – which would ultimately be the first of the three new teams that season to fall off the grid. Similarly, Virgin were operated by Manor, but that could not prevent them from a similar fate as HRT, albeit some years later.

It’s also true that Formula 1 is filled with success stories with teams who did not have much racing pedigree before joining the world championship – McLaren, Brabham, Anglo-American Racers (Eagle).

Finally, with so many manufacturers looking at the growth of F1’s popularity and licking their lips at the prospect of joining the grid, the reality is that it is a lot easier to takeover an existing entry than join as a new entrant. Even if a new team struggles, there’s more chance that a team will be taken over by an interested third party than there was when Manor disappeared from the sport.

One of the key factors in this is the matter of the budget cap. In fact, that was the very thing that compelled so many teams to apply to join the grid back before 2010, until the budget cap was removed from the regulations, leaving many of the new teams in a difficult position.

Now, all current teams are actively policed by the budget cap, with many of last year’s team principals stating their belief that the field will only get more competitive over the years ahead as it eventually creates greater parity within the sport. That will only make it more viable than ever for new teams to join F1 without the previous feedback loop of a lack of success leading to a lack of funds which leads to even worse performance until the team inevitably falls into oblivion.

While it would be great to see some well-known racing teams like Andretti entering into the world championship, it should not just be limited to those who have already raced and won in other categories. After all, the great teams in Formula 1 are heralded for what they achieved after they joined the sport, not for what they existed as before they became part of the intense world of grand prix racing.

Do you agree that the FIA should only accept new teams with established racing pedigree into Formula 1?