There are just two race weekends to go in 2022 and the first one promises extra action as the Sprint makes its final appearance of the year at one of Formula 1’s iconic circuits. So here are a few of the topics that we think will be doing the rounds when the paddock reconvenes in Sao Paulo…

We might be getting towards the end of the 2022 season but as we enter the final double-header of the year there are going to be even more competitive sessions in Brazil as the third Sprint of the season is here this weekend.

After exciting events at Imola and the Red Bull Ring earlier this year, there’s plenty to play for at Interlagos as qualifying takes place on Friday afternoon (after just one practice session, remember) to set the grid for Saturday’s Sprint, and then the finishing order from that Sprint will decide the starting line-up for the Grand Prix itself.

READ MORE: ‘I never thought I’d be able to win 14 races in a year’ says record-breaker Verstappen in Mexico

And in that Grand Prix, Max Verstappen will be looking to extend some of the records he set in Mexico. The first being the number of victories in a season, having moved clear of Michael Schumacher and Sebastian Vettel with his 14th win in Mexico City, but the other being the most points scored in a season – a record he could push even further in the Sprint as up to eight points are on offer in the Saturday event.

Verstappen might be going in search of another victory in his record-breaking season but he does so safe in the knowledge that he is guaranteed to finish the year as champion, just as Red Bull will in the constructors’ standings. But behind them, there’s still a lot at stake.

Sergio Perez moved just five points ahead of Charles Leclerc in the battle for second in the drivers’ championship in Mexico, a result that came about with Perez finishing third and Leclerc a distant sixth as Ferrari had a tough weekend. And that has also opened the door for Mercedes to put some unexpected pressure on the Scuderia.

TREMAYNE: Mercedes’ resurgence means we could be in for a thrilling end to 2022

Mercedes started this season a long way off the top two teams but have been improving their car as the year has progressed, with both Lewis Hamilton and George Russell a threat for pole in Mexico. That came after Hamilton had nearly won in Austin, and another second place – paired with Russell’s P4 finish – means they are now just 40 points behind Ferrari with the two races remaining.

It would still take a pretty major turnaround for Mercedes to overhaul Mattia Binotto’s team, but if they enjoy a similar pace advantage to Mexico – where Ferrari struggled with power unit performance and the car’s handling – then the Sprint provides two opportunities to close the gap. 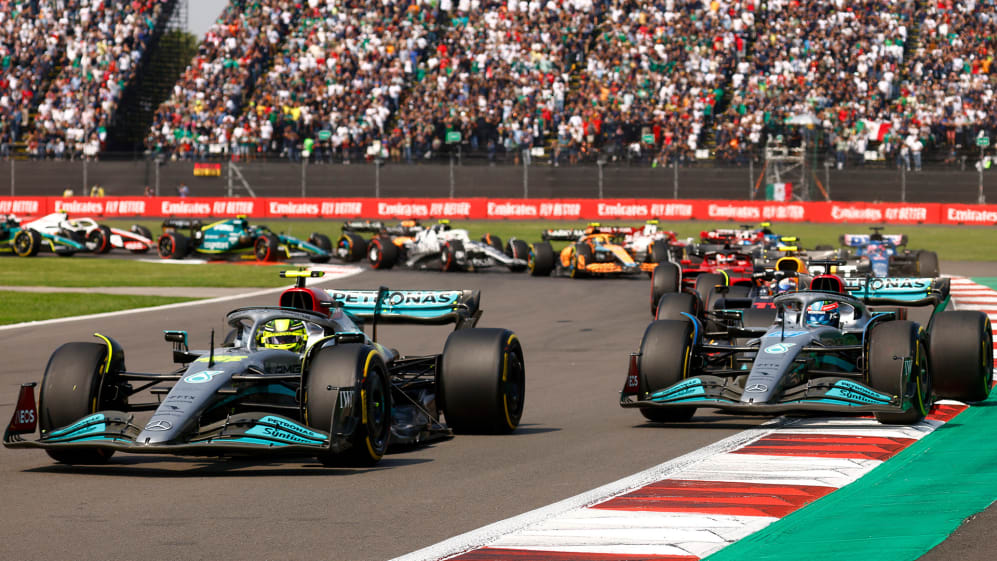 3. Undecided futures for Ricciardo and Haas

It wasn’t just Mercedes who were able to enjoy an encouraging weekend at the Autodromo Hermanos Rodriguez last time out, with Daniel Ricciardo on fine form as he negated a 10-second time penalty for causing a collision with Yuki Tsunoda to finish seventh.

Ricciardo carved through the field to end up best of the rest behind the top three teams in the sort of performance we were accustomed to seeing before his McLaren spell, and it serves as a reminder of his talent. But the Australian says he won’t be on the grid next season, while he insists he is still yet to officially decide what his future holds.

The smart money is on a Mercedes reserve role, especially after current reserve Stoffel Vandoorne was confirmed as joining Aston Martin next year, following Nyck de Vries in moving on from that position and leaving a vacancy at the Silver Arrows.

READ MORE: Ricciardo insists new Hamilton contract wouldn’t affect his F1 future as he aims to ‘come back with a vengeance’ in 2024

Ricciardo isn’t the only driver with intrigue surrounding his future with two rounds to go, though, as Haas have yet to confirm who will be in their second car alongside Kevin Magnussen next year. It appears to be a straight choice between Mick Schumacher and Nico Hulkenberg, with the latter not mentioned as part of the Aston Martin set-up in its announcement of Vandoorne.

If either situation is going to be resolved before the season ends, then we’re likely to hear about it over the coming 14 days. 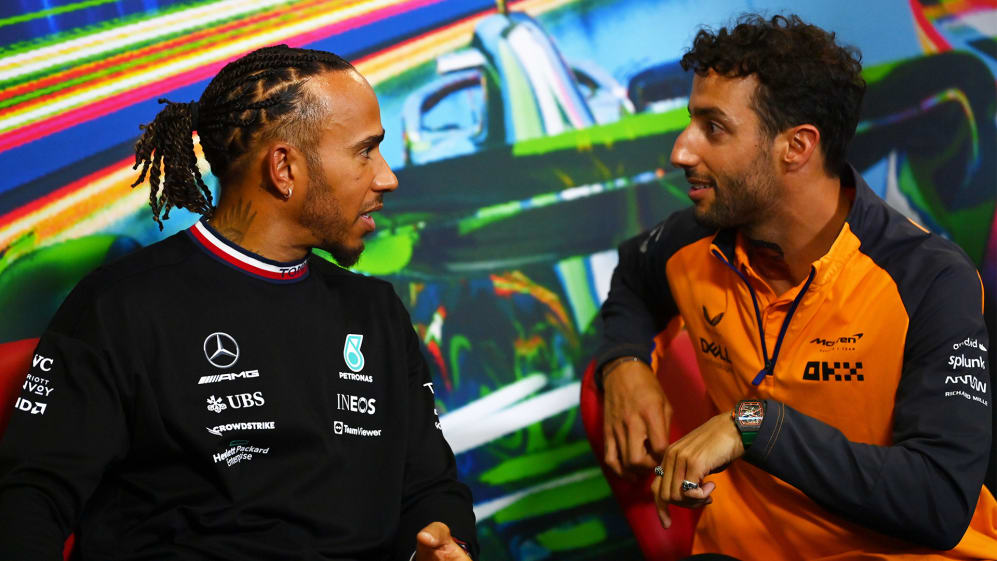 It remains to be seen where Ricciardo will land for 2023, amid talk of a Mercedes reserve role

4. The midfield fight hotting up

Haas are just holding on to eighth in the constructors’ championship by one point over AlphaTauri, and while the gaps ahead of them are slightly bigger, they are between teams who seem capable of scoring more heavily in the second half of the season.

With two rounds to go, Aston Martin are just four points adrift of Alfa Romeo for P6 overall, after Valtteri Bottas picked up his first point in 11 races in Mexico. And Ricciardo’s performance – allied with reliability issues for Alpine – saw McLaren close the gap to Alpine to just seven points in the battle for fourth place.

READ MORE: Norris says rivals Alpine were quicker in Mexico – but McLaren ‘did a better job’

Each position is worth millions of dollars in prize money, and a big swing in points this weekend at Interlagos could prove crucial to the outcome after Abu Dhabi. 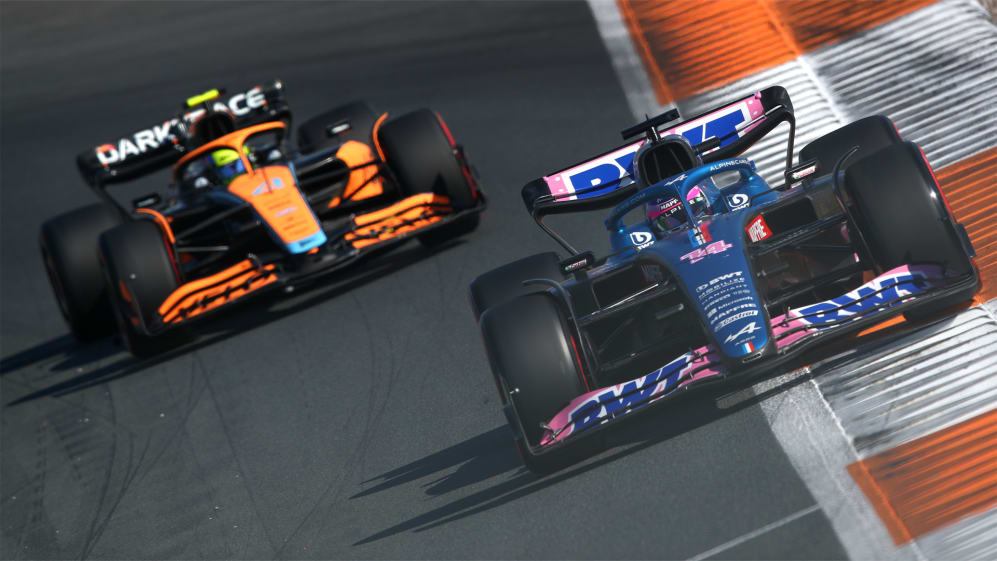 Speaking of crucial outcomes, Pierre Gasly finds himself in an uncomfortable situation with two races to go this season. In fact, he finds himself in one for much of the first part of 2023 as well.

I’ll admit we can’t really say we’re excited by this, but it’s noteworthy that Gasly has 10 penalty points for the 12-month period having picked up punishments in each of the past three races. In Japan he was penalised for speeding under red flag conditions, then in Austin he dropped more than 10 car lengths behind the car in front under the Safety Car, before getting another penalty point for leaving the track and gaining an advantage when overtaking Lance Stroll in Mexico.

READ MORE: 6 Winners and 5 Losers from the Mexico City Grand Prix – Who left the Autodromo Hermanos Rodriguez on a high?

That’s five penalty points in the past three races, and two more would trigger an automatic one-race ban for the AlphaTauri driver. Of course, we’re now entering the final two races of Gasly’s time with the team before he moves to Alpine, and the threat will be hanging over him until late May, as that’s when the first points expire.

It could be a tense few races for the Frenchman while he tries to end his spell as part of the Red Bull family on a high.