Proesterchen commented on the post, FIA over-reacted to 'porpoising' concerns after Baku - Symonds

The FIA introduced a series of rules changes in response to the punishment some drivers suffered from the bouncing their cars experienced following the introduction of heavily revised regulations this year. Lewis Hamilton in particular was visibly pained by the rough ride he endured at the Baku City Circuit.

A new metric limiting how much cars may bounce was introduced by the FIA. For 2023 the physical dimensions of the cars’ floors is being changed in an effort to reduced the ‘porpoising’ phenomenon. But Symonds believes the changes go too far.

“I think they overreacted a bit after Baku,” he told Auto Motor und Sport. “In Baku we saw the worst impact because a team tried something that didn’t work and then went public quite loudly.

“Had they not intervened, the problem would have been solved. Most teams now understand how to control bouncing.”

As the season progressed teams such as Mercedes increasingly mastered their porpoising problems. However it remained a factor at some circuits, including Yas Marina, scene of the season finale.

Symonds, who has decades of experience as an F1 engineer, admitted he had failed to anticipate the problem when he and his team drew up the ground effect rules which the FIA introduced in 2022.

“I have to admit, it wasn’t on our radar,” he said. “But we should have had [foreseen] it.

“We had the ability to discover it beforehand because we worked with dynamic simulations. For example, we used them to check what happens when a car spins and gets air under it. So the type of accident that Mark Webber once had in Valencia. This requires special software that we could have used to anticipate and understand the bouncing.

“I should have known too, because I used to work on ground effect cars. I had simply forgotten. Without a doubt, bouncing changed things. The teams first had to solve this problem before they could work on their aerodynamics. Bouncing is not purely an aerodynamic problem. A lot of mechanics also play a role, for example the suspension stiffness.” 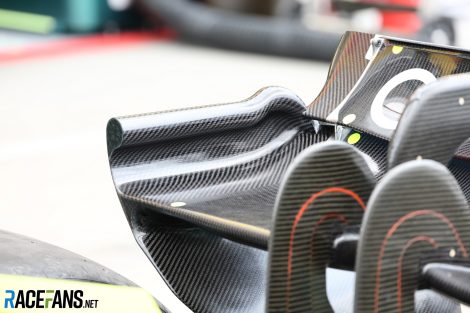 Aston Martin’s rear wing end plates could face a ban Some aspects of teams’ designs also came as a surprise to him, including Mercedes’ radical ‘zero-pod’ concept and an aggressive rear wing used by Aston Martin which Symonds suspects will soon be outlawed.

“We couldn’t see anything on the cars that would have damaged our concept,” he said. “A few things were definitely more radical than we thought.

“For example the Mercedes. We later tested and reviewed the concept in CFD and I have to say that the shape of the Mercedes is easier to follow than the other cars.

“The Aston Martin rear wing was also something we didn’t expect. I see a risk in this idea that it could go the wrong way if the idea is pursued further and pushed to the limit. I expect the FIA ​​will ban that for 2023.”

F1’s biggest teams enjoyed the most success under the new rules. Only a single podium for McLaren’s Lando Norris at Imola prevented Red Bull, Ferrari and Mercedes from sweeping the rostrum places across 2022.

Symonds admitted the completion wasn’t as close as he expected under the new rules but is hopeful that will change next year. “We underestimated that some teams still have large aerodynamics departments that got more out of the new rules,” he said.

“But we are hopeful that the gap from front to back will narrow quickly. This could already be observed to a small extent during the season.”