POWER RANKINGS: How the drivers rank on the final leaderboard at the end of 2022

The thrilling 2022 season is now over, with Max Verstappen and Red Bull claiming the drivers' and constructors' championships – but who made the top 10 in our overall Power Rankings leaderboard? Here are the final standings from our judges...

READ MORE: The most improved, most innovative, best-developed, and most dominant F1 cars of 2022

Max Verstappen broke records on the way to his second title, with 15 victories and 454 points over 22 Grand Prix weekends. The Dutchman took just 25 points from his first three races after DNFs in Bahrain and Australia but then claimed 34 over the Imola Sprint and Grand Prix. Hungary and Belgium were two stand-out drives from the champion elect, who began a winning run from France to Mexico and sealed the season off by cruising to P1 in Abu Dhabi. Our judges were duly impressed.

Charles Leclerc began the season with victory in Bahrain as neither Red Bull finished, and then he won again in Australia. His title hopes looked bright, but as it turned out he took just one more victory all year, in Austria. The Monegasque driver retired in Spain, was frustrated by finishing fourth at home, and retired again at Baku. Disappointing results in Canada and Great Britain stoked his ire once again and after Austria, he crashed out of the French Grand Prix. Five consecutive podiums followed and he sealed second in the standings with P2 in Abu Dhabi.

With P4 in the opening race, it was immediately clear that George Russell's first season at Mercedes wouldn't be the kind of dominant year the Silver Arrows have become used to. He did manage to eke out podiums in Australia, Spain and Azerbaijan with nine-straight top fives until he retired in a spectacular Lap 1 crash at Silverstone. The top fives came thick and fast once again with podiums in France, Hungary, the Netherlands and Italy, but Singapore was his and the team's low point. Sao Paulo presented a reprieve as Russell led a stunning Silver Arrows one-two and, of course, took his first career win – and in a season where team mate Hamilton failed to take a victory for the first time ever in his 16-year F1 career.

Lando Norris's season began with P15 in Bahrain but then came points in Saudi Arabia and Australia before he landed a podium at Imola, making him the only non-Red Bull/Mercedes/Ferrari driver to land on the rostrum in 2022. The McLaren driver finished all but two races in 2022, with Miami and Brazil his only DNFs, while he finished seventh on six occasions and took a brilliant P4 in Singapore to finish top of the midfield.

Lewis Hamilton's podium in Bahrain came courtesy of Red Bull's retirements but from then on, the seven-time champion struggled for results, finishing 10th in Saudi Arabia and 13th at Imola, as he concentrated on trying to get the new Mercedes W13 dialed in. Canada kick-started a strong run from the veteran, who then took five straight podiums – including a stunning charge to the rostrum at Silverstone – in a run that ended with a crash in Belgium. Italy saw him recover from 19th to fifth but Singapore saw him fall from third to ninth, before another strong run to end the season with P2 in the USA, Mexico and Brazil. Abu Dhabi, however, ended in a DNF – Mercedes' only race-ending mechanical failure all year.

Fernando Alonso didn't have the smoothest start to the season with Alpine with DNFs in Saudi Arabia and at Imola, but he then embarked on a run of 10-straight points finishes from Spain to the Netherlands, including a brilliant P2 in qualifying at the Canadaian Grand Prix. DNFs came again in Italy and Singapore, which left the Aston Martin-bound driver frustrated, but he pulled it back with P7 in Japan and the USA, and P5 in Brazil – as sparks flew between him and team mate Esteban Ocon. Further retirements hit in Mexico and Abu Dhabi as he rounded out his time with Alpine.

Sergio Perez's season began with a DNF in Bahrain but he returned to take P4 at Jeddah before podiums in Australia and at Imola, but that first win of the year remained elusive until Monaco. DNFs in Canada and Austria hurt his slim hopes for championship glory and he struggled to match Verstappen in the second half of the season, with one more win – in Singapore – before a home podium gave way to a disappointing and fraught P7 in Brazil. Despite taking P3 in Abu Dhabi, he lost out to Leclerc for P2 in the standings.

READ MORE: Perez says he ‘gave it all’ in Abu Dhabi GP despite coming up short in fight for P2 with Leclerc

Carlos Sainz began with podiums in Bahrain and at Jeddah but then spun off in Australia and crashed out at Imola. Podiums followed again from Miami to Monaco but the Spaniard had to wait until Silverstone for his first ever F1 win, before his hopes of P2 went up in flames at the Red Bull Ring. The second half of the season saw Sainz admit that he wasn't altogether comfortable with the car and DNFs in Japan and the USA, from pole, left him cursing his luck.

READ MORE: Mattia Binotto’s highs and lows – The key moments from his four seasons in charge at Ferrari

Esteban Ocon's first three races yielded points before a disappointing showing at Imola, but he bounced back from P20 to P8 in Miami and P12 to P7 in Spain. Silverstone was his first DNF of the season but that was bookended by strong results in Canada (P6) and Austria (P5), with the latter race leading to a run of four more points scores. Singapore's DNF led to a season-best P4 in Japan, and the Frenchman ended the season with three points scores to out-race team mate Alonso.

PODCAST: ‘I cried in my rental car’ – Esteban Ocon on his long, painful path back to a full-time F1 seat

Alex Albon had the 10th-fastest car to play with but he began with 13th in Bahrain and P10 in Australia, missing out at Imola but bouncing back with a solid ninth in Miami. DNFs in Monaco and Great Britain punctuated a barren run from Spain to Belgium, where he finished 10th from 10th on the grid. Albon had to withdraw from the Italian GP with illness but pulled off a remarkable recovery to compete in the final six races, and while he picked up just four points over the season, the Thai driver's consistency and tenacity didn't go un-noticed by our judges.

ANALYSIS: Why Williams and Albon are sticking together for 2023 and beyond 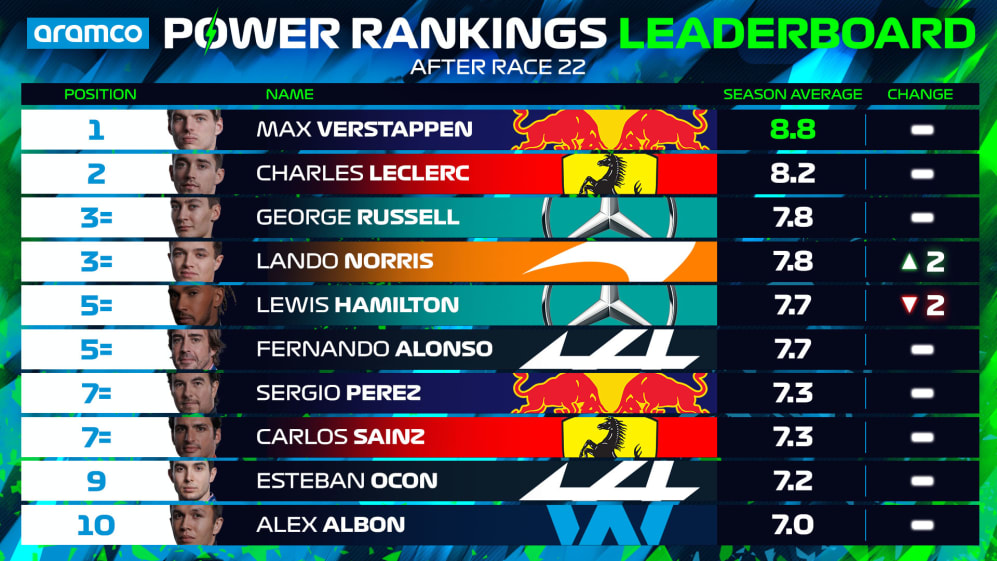