More Formula 1 drivers have backed the FIA’s decision to intervene over porpoising, as they see it as the best way to make teams improve the ride of their cars.

The FIA issued a technical directive to F1 teams this week stating it will monitor the vertical movement drivers are being subjected. They intend to take action against teams whose cars exhibit excessive porpoising.

Fernando Alonso said drivers went to the FIA in order to ensure safety isn’t being compromised to improve performance.

“I think the drivers simply wanted to ask some help from the FIA because obviously, coming from us, it’s difficult sometimes to go to our team and tell them to lose performance just because we have pain or whatever,” said the 20-year F1 veteran. “So if they can do it for us, it’s easier.”

Sergio Perez, whose Red Bull team mate Max Verstappen has said he believes changing the regulations mid-season is wrong, argued that the FIA was right to address the matter.

“I think all the teams are chasing the balance or chasing the downforce,” Perez said. “And the way to find it is to go as low as possible. But there certainly is a limit on how low you can go.

“We all want to be lower than we currently are, but we all have limits where we can go to. If you’re getting off limits, that is not helpful for the drivers, like a few of the drivers’ comments last weekend. So I think it’s a good intervention from FIA to try and calm it down.”

The matter came to a head in Baku where several drivers experienced especially uncomfortable rides. Carlos Sainz Jnr, who was among the most vocal drivers on the subject, said he felt their concerns had been recognised.

“The FIA has definitely listened to the conversation that we had with them in the last few weeks, and the drivers’ complaints,” he said. “To be honest, I didn’t expect such an early response or such an early action.

“We really need to look into the detail of what are the actions that we need to take to make these cars, in the future, a bit more benign for the drivers. But let’s see how these rules are.”

Sainz added that he expected any rules change to impact every team, not just those whose drivers had spoken out about the issue. “I think they’re going to start affecting pretty much every team on the grid because everyone is just running as stiff and as low as they can. But I’m interested to see how how it affects everyone really, to see how it goes.” 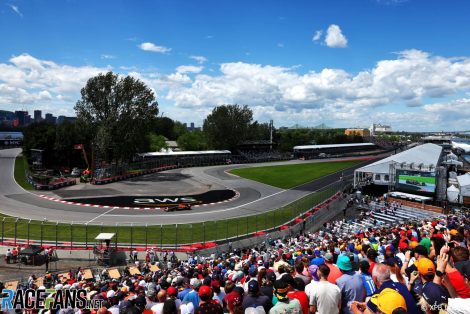 Gallery: 2022 Canadian Grand Prix practice in pictures Grand Prix Drivers Association director Sebastian Vettel also praised the FIA’s decision to issue a technical directive. “Obviously, it will be very difficult to foresee now what the solution is for everybody,” said the Aston Martin driver. “It will be impossible for all the teams to agree either. But it cannot be us drivers will suffer injury short or potentially long-term and suffer for the rest of their lives for stuff that can be avoided.

“I know every sport practice, to the extreme, is not healthy to some degree. But I think, looking at the future, it can’t be going on for another four or five years like that. So it’s good then if the FIA looks into it and to put safety over performance.”

The longevity of the current rule set makes it essential to take action immediately, argued Nicholas Latifi. “I think that for the next three or four years, with these kind of cars with the bouncing and harsh ride that a lot of guys are experiencing, it’s for sure going to have kind of long-term negative health effects.

“So I think the intervention from the FIA is good. I think this is going to be the specific teams and drivers that are maybe happy to deal with it at the expense of gaining more performance versus some that are not. So, for sure there’s going to be some people talking with the directive, some people not,” Latifi reasoned. “But I do think it was a good thing for the FIA to intervene.”

Haas driver Kevin Magnussen feels the technical directive was “what they had to do”, saying that it was the only way to reach an agreement. “That’s why the FIA is there, to step in and sort out the issue. There’s been a lot of drivers now saying that they’ve got physical issues and concerns and it was definitely the right step.”