MONDAY MORNING DEBRIEF: Why Red Bull had no answer for Mercedes and Ferrari in the Sao Paulo GP

Sergio Perez was never any threat to first-time winner George Russell in Brazil, but for a long time ran a solid second to him. Yet he finished a desultory seventh.

Putting aside the controversy between him and team mate Max Verstappen about team orders, just how did it all get away from him? The essence of it was about tyre choice and the reasons for that stretch back to the beginning of the weekend, and the Red Bull’s particular traits around this circuit.

Coming into the weekend the medium C3 compound tyre was expected to be the basis for a typical Interlagos two-stopper, with probably a short opening stint on the soft C4 and two on the medium C3. But the Sprint format of the weekend meant there was less time than usual to validate that, with just a single practice session before qualifying on the Friday.

From his allocation of six sets of soft tyres, four mediums and two hards, Perez used a set of softs and set of hards in FP1 (confirming the hard was too slow to be of any strategic use), three sets of softs in qualifying, and ran only used tyres in FP2 on Saturday morning – leaving him with two sets of softs heading into the Sprint and all of his mediums. 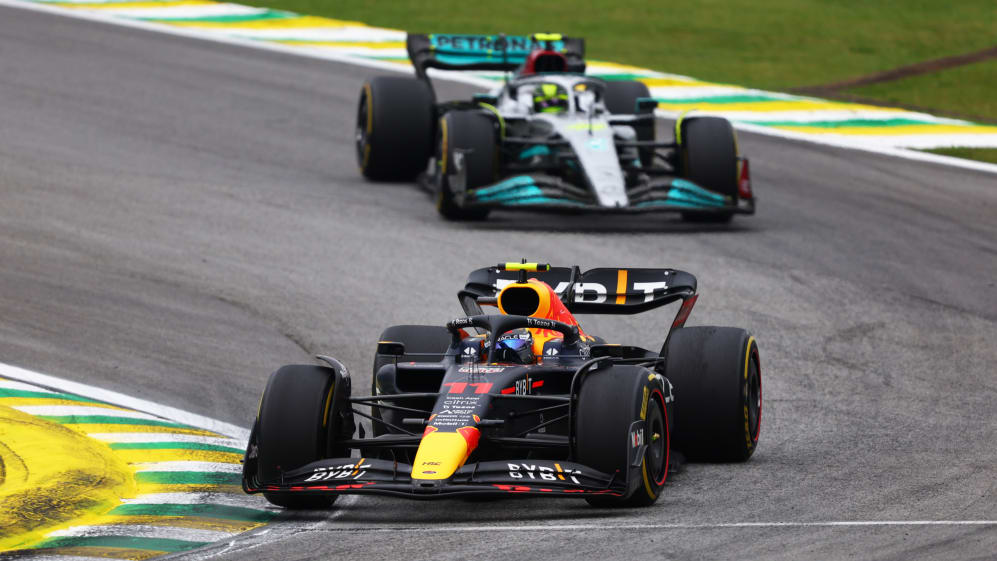 At this stage, Red Bull had done no running on the medium tyre with either car, having saved them for the planned soft/medium/medium two-stop race. But FP2 had revealed a very high level of front degradation.

Verstappen’s side of the garage reasoned that from P2 on the grid for the Sprint, alongside the out-of-position pole-sitter Kevin Magnussen, he would be able to take the medium tyre, so minimising the degradation.

Even on this less grippy tyre, they believed he’d be able to take the lead and control it while the tyre took a couple of laps longer to come up to temperature, then hopefully he could pull away and win.

From ninth on the grid and needing to make up places, Perez didn’t feel he could afford himself the luxury of the medium and would have to race the soft and control the degradation as best he could. 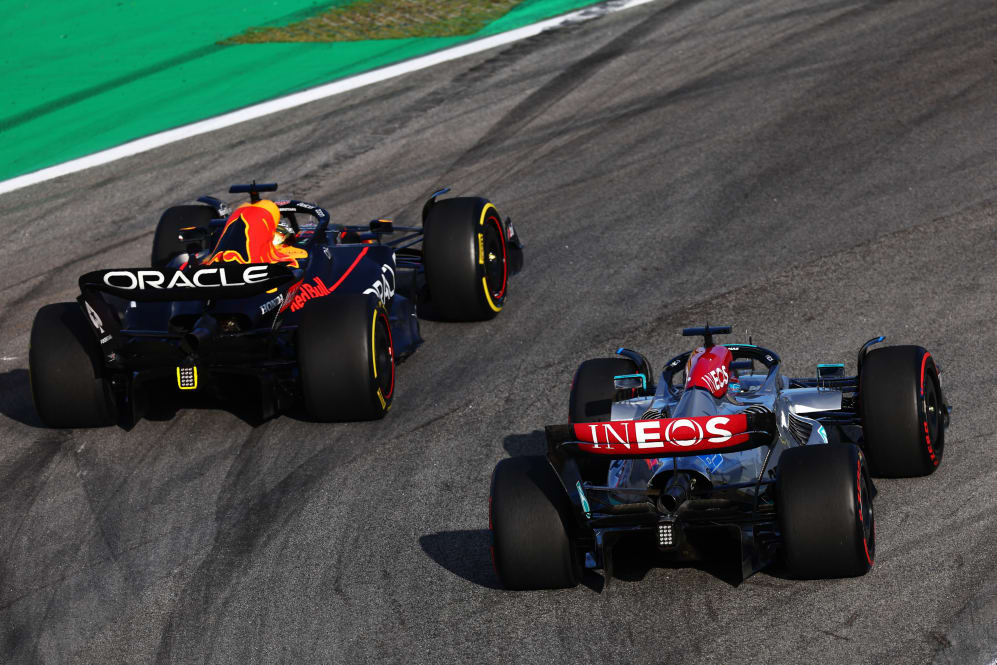 Getting onto the medium for the first time in the Sprint race, Verstappen found that on the Red Bull, the front degradation was just as high as on the soft despite it being a much slower tyre. He struggled to fourth place, comfortably beaten by the soft-tyred Russell, Carlos Sainz and Lewis Hamilton, and just ahead of the soft-tyred Perez.

This left the original soft/medium/medium plan for Sunday exposed as inappropriate. The soft – and not the medium – was going to be the favoured tyre. The medium was both slow and no more durable than the soft.

Perez, though, with only one set of softs remaining and all his original four sets of mediums, was stuck with the original plan. Verstappen’s use of the medium in the Sprint had at least left him with two sets of softs for the Grand Prix and his strategy was altered accordingly.

Starting on the softs, all went reasonably well for Perez in his first stint, as he ran a comfortable second to Russell once Hamilton and Verstappen had delayed each other with their restart collision on Lap 7. 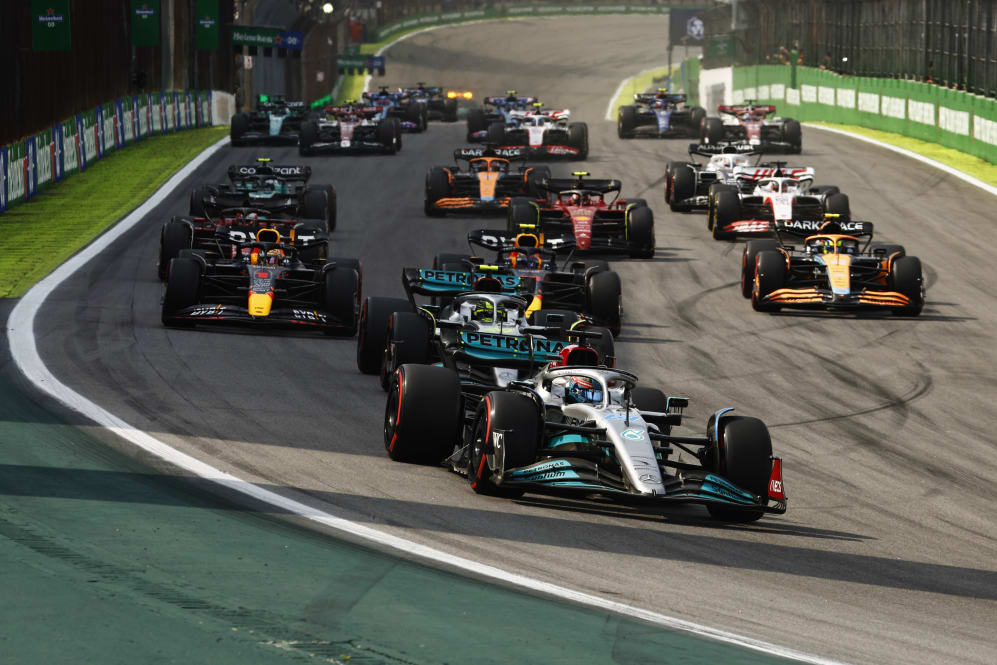 Russell led the way from Hamilton, Verstappen and Perez at the start of the main Grand Prix

Perez was steadily pulling away from the medium-tyred Sainz in third, but the latter’s early stop (because of his blocked rear brake duct) and switch to softs began to put undercut pressure on Perez, and he was brought in earlier than ideal, on Lap 23, and switched to the mediums.

These tyres were just as problematical as they had been for Verstappen the previous day, and Perez struggled for pace. He was overtaken by the recovering Hamilton for second and undercut by Sainz for third.

READ MORE: Verstappen on why Hamilton clash was ‘a shame’ – and his ‘reasons’ for not obeying team orders in Sao Paulo

Perez regained a place when Sainz made a third stop, but looked set to lose it again as the Ferrari would be coming back at him much faster on another set of softs, while the Mexican had been obliged to take another set of mediums. 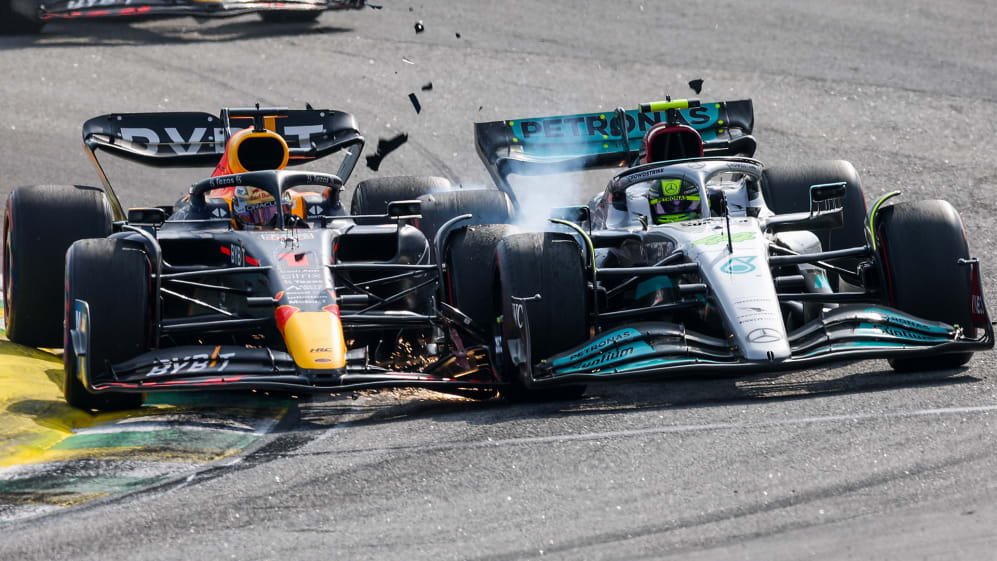 Perez looked set therefore for a damage limitation drive to fourth, and with his rival for second in the title race Charles Leclerc set for a distant fifth if he could pass Valtteri Bottas’s Alfa.

But then came the Safety Car to clear Lando Norris’s broken-down McLaren. Now Perez was in big trouble, for the warm-up of his medium tyre was sure to be worse than that of the soft-shod cars all lined up behind him.

He was left as a sitting duck, passed by Sainz, Leclerc, Fernando Alonso and Verstappen (under team instruction). The latter’s refusal to give the sixth place back to him only compounded Perez’s misery.