Max Verstappen was left to reflect on a “difficult” Sprint in Sao Paulo as the Red Bull driver took the chequered flag in P4 – while team mate Sergio Perez admitted his concern at the team’s pace when compared to Mercedes.

Verstappen started the Sprint in second – as one of two drivers along with Nicholas Latifi to start on the medium tyre, with the rest of the grid opting for softs. The Red Bull racer quickly got past Kevin Magnussen for the lead but was passed himself by George Russell on Lap 14 of 24.

Verstappen then came under pressure from Carlos Sainz, and as the Spaniard made his way past, the two racers collided, leaving the Dutch driver with front wing damage. Verstappen then lost another place to Lewis Hamilton, meaning he finished the Sprint in fourth.

“It was way more difficult than we expected it somehow,” said Verstappen when asked whether he found the Sprint hard on the medium tyre. “I didn’t expect to have that [tyre degradation]. Then even on the soft we wouldn’t have been fast enough, so we are clearly struggling on keeping the tyres alive.

“So, this is something we need to try and fix for tomorrow. Even though of course there is not a lot we can do but it can’t get worse than this… At the moment [Mercedes] look unbeatable, but we will analyse everything.”

2022 Sao Paulo GP Sprint: Verstappen and Russell in thrilling fight for the lead at Interlagos

When asked what he made off the contact with Sainz, Verstappen said: “It's tiny. It broke my endplate and a little bit of the structure but luckily it didn’t fall down. At the end of the day, I would have finished fourth anyway with a complete front wing.”

Team mate Perez started the Sprint in ninth and made his way up to fifth by the en. And while he was happy to make it into the top five, he was left concerned by his team’s pace when compared to Mercedes.

WATCH: Magnussen leads Verstappen at the start of the Sao Paulo Sprint as Alpines make contact

“We managed to get into the top five, which is always good,” said Perez. “But I think I’m more concerned about tomorrow because the pace didn’t look that great on our side, so plenty of work to do tonight.

“I was fairly impressed with [Mercedes'] pace; they were super quick…. So, plenty of things to understand for tomorrow.” 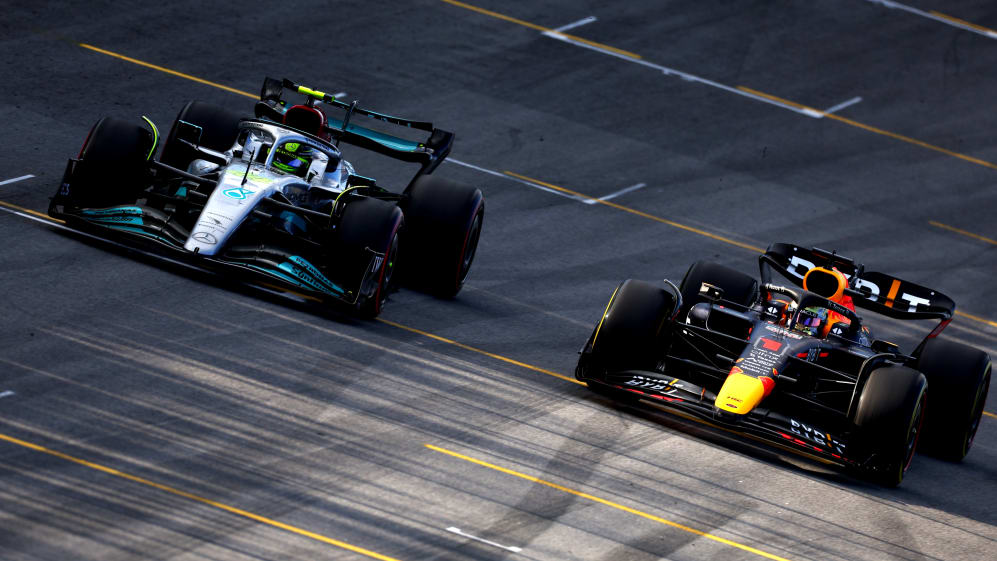 Verstappen fell to P4 by the flag

Team Principal Christian Horner admitted that the soft tyre would have been a better option for Verstappen, but remained hopeful that the extra set of the softest compound compared to Mercedes would help them come the race on Sunday.

AS IT HAPPENED: Follow all the action from the F1 Sprint in Sao Paulo

“We felt that the soft was a bit limited in range, so we took the decision to start on the medium; if we could survive the first 12 laps, the second half of the Sprint would become a little bit more comfortable,” said Horner.

“Having survived the first half of the race, we ended up actually in a worse degradation than the soft and Mercedes had a quick car today and we just couldn’t hold them off… The soft tyre would have been better for us today. But the advantage is we take that extra set into tomorrow’s race. What we give up today strategically hopefully we might get back tomorrow.”