In the round-up: Lewis Hamilton says there is no comparison between the stunning circumstances of his 2008 championship success and controversial defeat last year.

‘Someone made a decision’ to manipulate 2021 finale – Hamilton

Ahead of Formula 1’s return to Yas Marina this weekend, where the championship was decided in deeply contentious circumstances a year ago, Hamilton made it clear he believes the title was taken away from him in 2021.

Speaking to Timo Glock in a feature for Sky on the 2008 championship decider, Hamilton said the dramatic turn of events in that race “was different [to 2021] because this one wasn’t manipulated by anybody – someone made a decision for that result to be the way it was, basically.”

Hamilton said there were “similarities” to “the pain of losing in 2007” and his fear during the final laps of the 2008 race that the championship had slipped through his fingers again. He clinched that title after passing Glock, who had lost grip as he was still running on dry weather tyres in wet conditions, at the final corner. 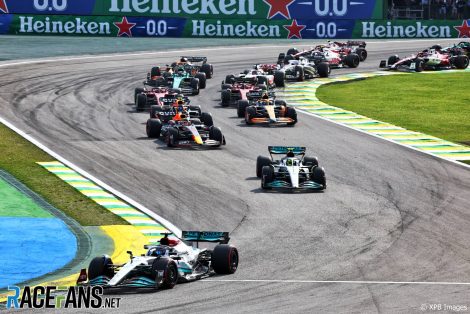 Poll: Rate the race: 2022 Brazilian Grand Prix Following the finale Glock received abuse from some who claimed he had deliberately slowed to let Hamilton pass him. The now seven-times champion told his former rival: “I’m sorry at the time that I didn’t understand what was going on for you in your world.

“I was very young, I’m sorry that I wasn’t able to support you in that time. If that was today I know I could be there and support you. But anyways, you’ve dealt with it amazing.”

Ferrari Driver Academy member Oliver Bearman, who missed out on the Formula 3 title by just seven points this year, will move up to Formula 2 next season. Bearman, who won Formula 4 titles in Italy and Germany last year, will remain with his Prema team as he steps up a category.

We are deeply saddened to learn our vice-president and former chair, @carscribe Sue Baker, passed away this morning following a long illness. Sue was a pioneer for women in automotive journalism and a former presenter of @BBC_TopGear. A full tribute will be published later. pic.twitter.com/pmEk88joOl

Not much to write home about yesterday but there was for this guy. Congratulations @GeorgeRussell63 on your first win!! Amazing job and well deserved, enjoy it! pic.twitter.com/QduMsQrEvx

Russell will celebrate his first win in style:

Russell: "I was talking to Carlos, we're on the same flight direct to Abu Dhabi. It's a 15-hour flight…"

Russell: "They're free on the plane aren’t they?"

Sainz: "That’s why they’re on me!" pic.twitter.com/cc3jkYmS7J