Pierre Gasly says he dreads to think how many points he’s missed out on over the opening races of 2022.

The AlphaTauri driver has managed just three points-scoring finishes so far this year and lies 11th in the standings after nine races.

“I get nightmares when I see how many points we’ve lost since the start of the year with different incidents and mistakes we did,” he said in Canada.

As the AT03’s competitiveness has varied significantly from race to race, Gasly says the team need to be prepared to take what they can get at each round.

“At times maybe we don’t have performance and we need to settle for P12, but at least we feel that we have maximised the package that we have and this is where the satisfaction comes. At the end of the day obviously I’d like to fight for wins but the moment is not the right time for me to do it and we need to have the right target.”

He achieved his best result of the season so far with fifth place in Azerbaijan. Following a strong of disappointing results, which culminated in a frustrating Q1 elimination in Monaco, Gasly spoke to the team and encouraged them to deliver their best.

“Obviously the frustration builds up a little bit and it was important for me to show them that I’m there to push them, to challenge them,” he said. “Putting myself in the same boat as everyone and also to drive them forwards as a team and together.

“That’s why I had a good talk with everyone, I think it was well appreciated. And it was good to confirm that after that with the best weekend of the season. So hopefully this can be a good turning point in our year.” 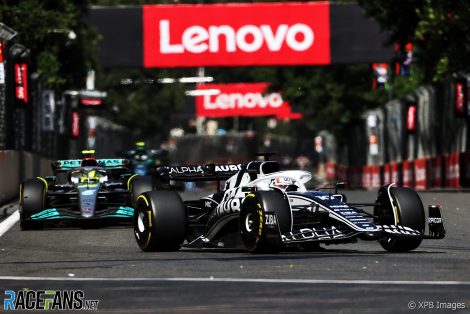 Solid Baku drive yielded fifth for Gasly AlphaTauri team principal Franz Tost said he hopes the reliability problems which have frustrated Gasly earlier in the season can now be put behind them.

“Unfortunately, at the beginning of the season, we had a lot of reliability issues. For example in Bahrain when the battery caught fire, then there were some other reliability issues, it was not his fault, it was coming from the team.

“I am really happy now that, at least in Baku, he could show how good he is. I hope that we will provide him with a competitive car for the rest of the season because Pierre has the ability to be in front and it’s just in the hands of the team to give him a really good, competitive car.”