Hazel Southwell wrote a new post, Hamilton tells NASCAR's Wallace to keep his head high as he returns from ban

In the round-up: Lewis Hamilton offered his support to NASCAR driver Bubba Wallace who will return from a one-race ban in the series’ finale at Phoenix today.

Wallace will “do amazing when he comes back” – Hamilton

Wallace became the first driver to be banned for a race by NASCAR since 2015 following an on-track collision and subsequent altercation with Kyle Larson at Las Vegas Motor Speedway two weeks ago.

The banning of Wallace, the first black driver to win a NASCAR Cup series race, prompted questions over whether other drivers would have been treated as harshly. Hamilton, who has declared his support for Wallace previously, said he “probably doesn’t need any advice” from him.

“I think what he’s done and what he stands for is amazing and he’s been so brave and being outspoken. I saw his documentary, I’m just generally really proud of him. 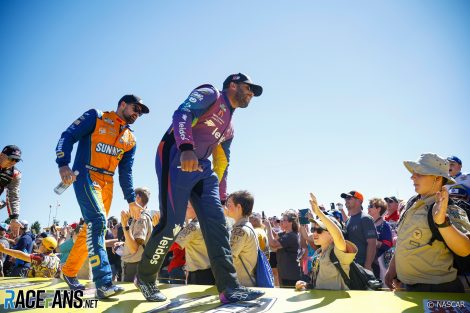 Wallace is the first NASCAR driver to be banned in seven years “I think the best thing you can do is not let anything pull you down, just keep on pushing, keep your head up. Do not give up. Do not listen to the things that are being said and do not read what’s on social media and just keep believing.”

“If you let those things get to you, it can hold you back. And so I just ask him to [hold his] head high and don’t give up,” Hamilton concluded. “I think he’s going to do amazing when he comes back.

Aston Martin team principal Mike Krack says he believes the team can now move forwards, following the conclusion of an FIA investigation into its 2021 cost cap reporting that led to a $450,000 (£387,000) fine.

Despite the punishment, Krack said Aston Martin was satisfied with the process. “My first reaction is that we are happy we can close this chapter,” he said. “The 2021 cost cap discussions are are hopefully terminated soon.

“The collaboration with the FIA was very good, very open and transparent and the regulations are very complex and there was different interpretations and obviously that’s what it led to.”

Unlike Red Bull, Aston Martin was not found to have over-spent, a point Krack was keen to emphasise.

Aston Martin’s fine, unlike Red Bull’s, was for mis-categorising the way that it accounted for its spending, rather than breaching the cost cap. “I think it’s important to highlight that we were always under the cap which is the most important factor and the FIA has determined the fine, we accept this and move on,” said Krack.

Track temperatures only explanation for Williams’ loss of performance 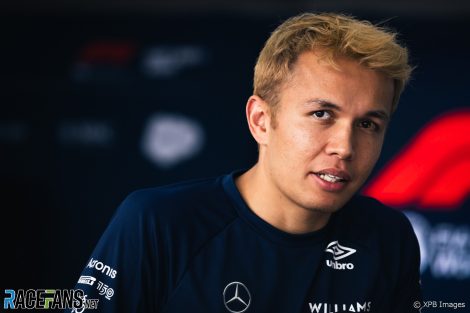 After 10th in practice, 19th in qualifying disappointed Albon Alexander Albon, who joined his team mate at the bottom of the times in qualifying yesterday, is at a loss to explain why he was so much slower in qualifying compared to final practice.

“Were we nine tenths off in FP3 and obviously we’re not running minimum fuel in FP3 or anything like that,” explained Albon. “The track definitely got hotter, I think that played a massive part in our performance in qualifying.”

He called qualifying a “weird session” saying that “it really went away from us” and it wasn’t clear why. “We did have a different out-lap strategy than most most cars, I honestly think we stuck to our guns, which was the right thing to do. And it was working for us in FP3, I think, as the track came up and fell away from us.

“I’m only hypothesising, track temps and stuff like that, but honestly that’s the only explanation I have at the moment, because we didn’t change the car in between the two sessions.”

Albon’s final lap was compromised by a snap of oversteer which saw him run wide and lose the time for a track limits violation. He believes that was also related to the higher track temperature. “It was the same corner speed as run one and [I had] just no rear at all.”

Alonso hits out at media over his Hamilton comments

“And again… Please, all the titles are amazing, well deserved and inspiring,” said Fernando Alonso in a social media post yesterday. “Incomparable to each other and let’s enjoy champions and legends of our current time.”

What was he referring to? He didn’t specify, but at the time his name was trending on Twitter largely due to quotes attributed to him regarding Lewis Hamilton and Max Verstappen, reported by Dutch newspaper De Telegraaf. “Max’s titles are worth more than Hamilton’s,” it said. “I have a lot of respect for Lewis but it’s different when you win seven world championships having only had to fight against your team mate.”

“Tired of the continuous search for headlines,” Alonso added in his social post. “Let’s enjoy them.” He did not claim the quotes were incorrect or misattributed.