Gubstar commented on the post, Miami keeps 'B&Q car park' chicane but track will be resurfaced to improve grip

The Miami Grand Prix organiser will address one of the complaints made by Formula 1 drivers ahead of their return for the second running of the race this year.

But while the low-grip track surface is to be completed replaced, the much-maligned turn 14 and 15 chicane will remain. The resurfacing work is part of an array of upgrades to the Miami International Autodrome which will be made before the 2023 edition of the race.

Ahead of the venue’s second-ever race event on 5th-7th May this year, the whole 5.4-kilometre track will be repaved by circuit design firm Tilke with the intention of “improved grip levels” to increase the chance of overtaking. Last year’s race averaged less than one pass per lap.

However there will be no changes to the slow chicane which was widely panned by drivers. Lewis Hamilton said it “reminds me of being in a BQ car park” during the inaugural event. 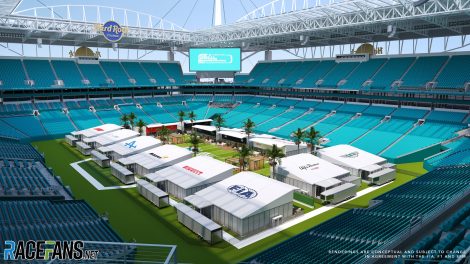 F1 teams’ hospitality will be situated within the stadium Another major infrastructure investment is the creation of a permanent building to host F1’s Paddock Club that will have its own rooftop club. Construction began six months ago and the building will sit above the pit lane and garages on the main straight.

The paddock space for the teams will now be expanded into the stadium, where the hospitality units will be based. Design concept images and quotes from the grand prix’s president Tyler Epp suggest the paddock will be placed on top of the grass football pitch in the stadium. This is likely to be covered using a durable surface or cover to protect the playing surface.

General admission ‘Campus Pass’ ticket holders will be able to access the stadium to view the paddock from above at the top of the stands, and those tickets will be available to buy from 23rd January.

The stadium owners sold more tickets for last year’s grand prix than any event in the venue’s history.