Daniel Ricciardo will drop off the grid for the 2023 season after ending his time at McLaren early and returning to Red Bull in a third driver role. It is with these two teams that the Australian took his eight Grand Prix victories to date, but how do they all compare?

More than eight years on from his maiden triumph, and just over a year on from his most recent, we had a go at ranking Ricciardo’s wins, with the full list presented below in reverse order. Agree or disagree? Be sure to have your say by taking part in our poll at the end.

With title rivals Sebastian Vettel and Lewis Hamilton clashing behind the Safety Car (more on that here), Vettel picking up a stop/go penalty, Hamilton facing an extra pit-stop to fix a loose headrest and two Force Indias colliding, F1’s visit to Baku in 2017 was not short of drama.

And, after a disappointing run to 10th position in qualifying, Ricciardo would make the most of the incidents unfolding around him to rise through the field for an unlikely victory, beating the squabbling Valtteri Bottas and Lance Stroll by some four seconds.

While Ricciardo’s recovery drive involved him inheriting plenty of places, there was still time for one of his trademark overtakes – an incredible three-car pass on Renault’s Nico Hulkenberg and Williams pair Felipe Massa and Stroll into Turn 1 early on.

Ricciardo also pounced on drama at the start of the Belgian Grand Prix in 2014, when Mercedes duo Hamilton and Nico Rosberg dramatically made contact through Les Combes and Red Bull team mate Vettel ran off the road amid damp patches lingering from earlier showers.

With Hamilton all but eliminated from proceedings, Rosberg pitting early for a new front wing and Vettel trying to regain his composure, Ricciardo found himself leading the way rather comfortably from Ferrari man Kimi Raikkonen after the first round of pit stops.

ANALYSIS: Why are Ricciardo and Red Bull reuniting for 2023?

A damage limitation exercise saw Rosberg recover to P2 as the race developed and, after a later second stop, he cut the gap to Ricciardo up front, but the latter kept his cool and ultimately crossed the line 3.3 seconds clear – with third-placed Bottas almost half a minute back. 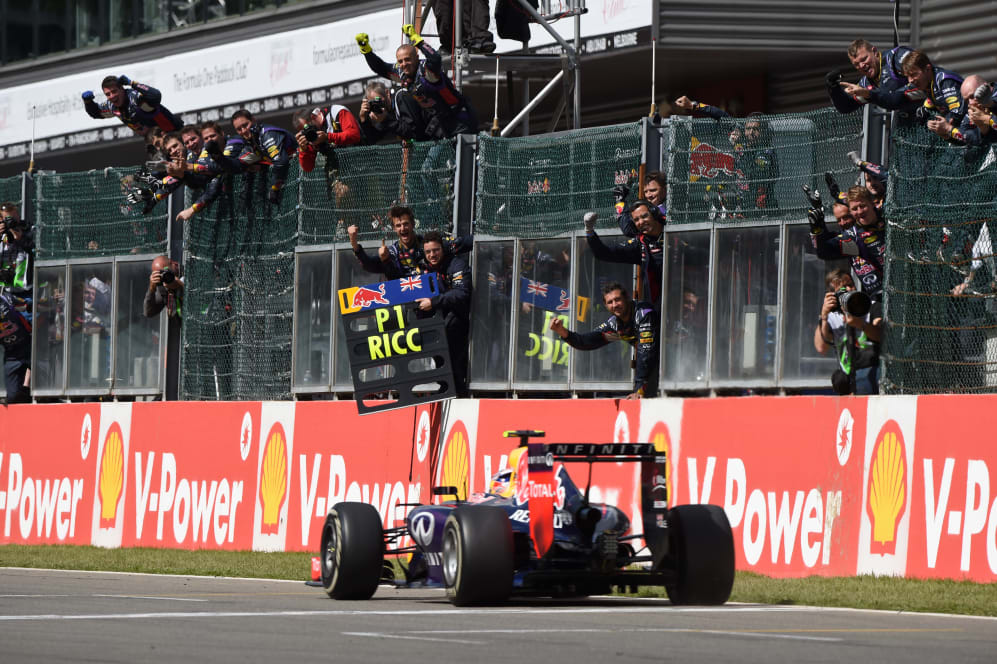 Ricciardo faced a new internal challenge at Red Bull in 2016 when teenager Max Verstappen secured promotion to the senior team just four races into the season and marked his arrival with a stunning debut victory at the Spanish Grand Prix.

Later in the campaign in Malaysia, fans would see the head-to-head battle they had been craving when the Red Bull pair went wheel-to-wheel for victory after rivals Mercedes hit trouble – Rosberg spinning and Hamilton suffering a brutal engine failure.

WATCH: From Ricciardo with love – the Australian’s biggest sends during his time in F1

Having been put in the shadow by his team mate at Barcelona (on an alternate strategy) and missing out on victory in Monaco due to pit stop drama, Ricciardo neatly fended off an attack from Verstappen late on – which included a side-by-side run from Turn 4 to 8 – to bag his sole win of the campaign.

Key moment: A late pass on Perez that paved the way to attack Rosberg

A few months before his victory at Spa, Ricciardo joined fellow Australian race winners Mark Webber, Alan Jones and Jack Brabham with his maiden F1 triumph – which was another rollercoaster ride from sixth on the grid in Canada.

Having jumped team mate Vettel in the pits, and benefitted from Hamilton’s technical-related retirement, Ricciardo’s race well and truly came alive in the closing stages as he worked his way up to P2 – ahead of Force India driver Sergio Perez – four laps from the finish.

BEYOND THE GRID: ‘I don’t feel completely done’ – Ricciardo opens up on his chances of F1 racing return

Then came the decisive move for the lead when he cleared Rosberg – experiencing similar engine problems to Mercedes team mate Hamilton – with two laps to go and cruised to the chequered flag, which was waved under the Safety Car after Massa and Perez crashed at speed. 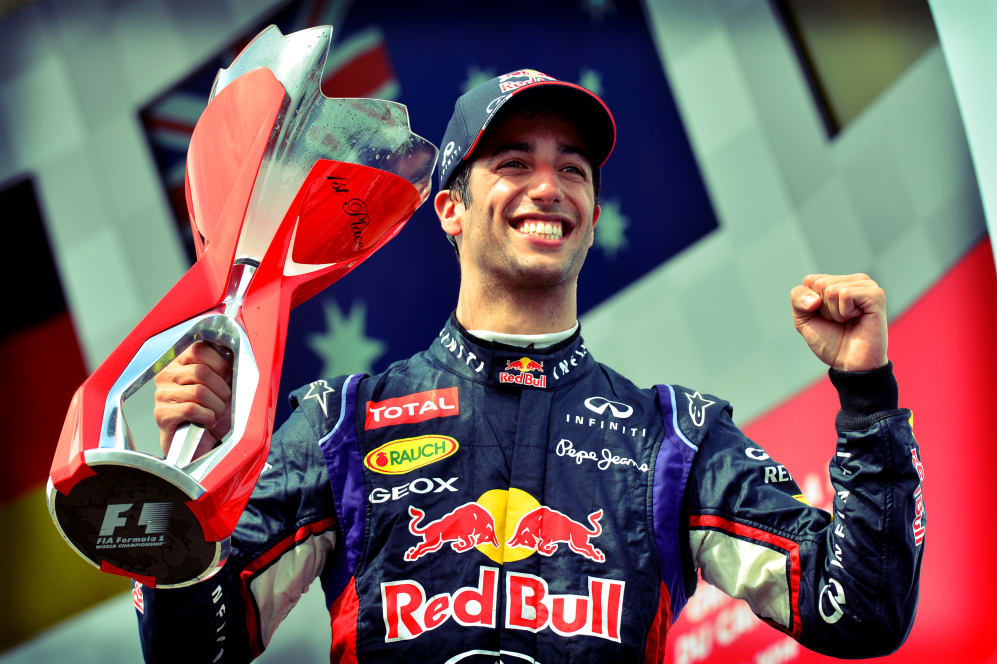 Key moment: Both overtakes on his world champion rivals

Wet-dry conditions and the tight, twisty Hungaroring circuit were the ideal ingredients for Ricciardo as he claimed the second of his three wins over the course of the 2014 season – splitting the aforementioned victories in Canada and Belgium.

After a tricky opening stint on intermediate tyres, which saw pit lane starter Hamilton go for a spin, Ricciardo used a Safety Car period initiated by Perez’s heavy crash on the start/finish straight to swap to slicks and set up a victory assault.

Typically brave moves on Hamilton (who had bounced back from his off) around the outside of Turn 2 and Alonso up the inside of Turn 1 followed, with Ricciardo storming to the finish line and letting out a roar over the radio when he crossed it.

Ricciardo delivered an overtaking masterclass in China in 2018 as he climbed from sixth to first with a full arsenal of moves around the varied Shanghai layout, leaving rivals with no answers for both his clever car placement and outright speed.

A late-braking pass on Hamilton into the Turn 14 hairpin and an even more daring lunge on Bottas into the Turn 6 hairpin were particularly impressive and, once in clean air, he pulled almost 10 seconds clear of the chasing pack.

READ MORE: From Magnussen’s mega comeback to the pursuit of Piastri – 8 crazy storylines from the 2022 season

It was a race that summed up Ricciardo’s talent and personality, with his subsequent cheeky comment – “sometimes you just have to lick the stamp and send it” – adding the icing on the cake.

Key moment: Using the Sprint to put his car in the mix

Ricciardo faced a tough time trying to adapt to his new surroundings at McLaren for the 2021 season, a struggle that would continue through F1’s rules reset in 2022 and ultimately lead to the two parties splitting a year earlier than planned.

But for all the lows, there was one enormous high that will never be forgotten. Monza last year, of course, when Ricciardo led home team mate Lando Norris in a spectacular one-two finish – giving McLaren their first F1 victory since 2012.

Having jumped from fifth to third in the Sprint, Ricciardo gained another spot for the main Grand Prix due to Bottas’s grid penalty and, after that incident between title rivals Verstappen and Hamilton, the path to a famous win was cleared. Cue the first victory Shoey for three years. 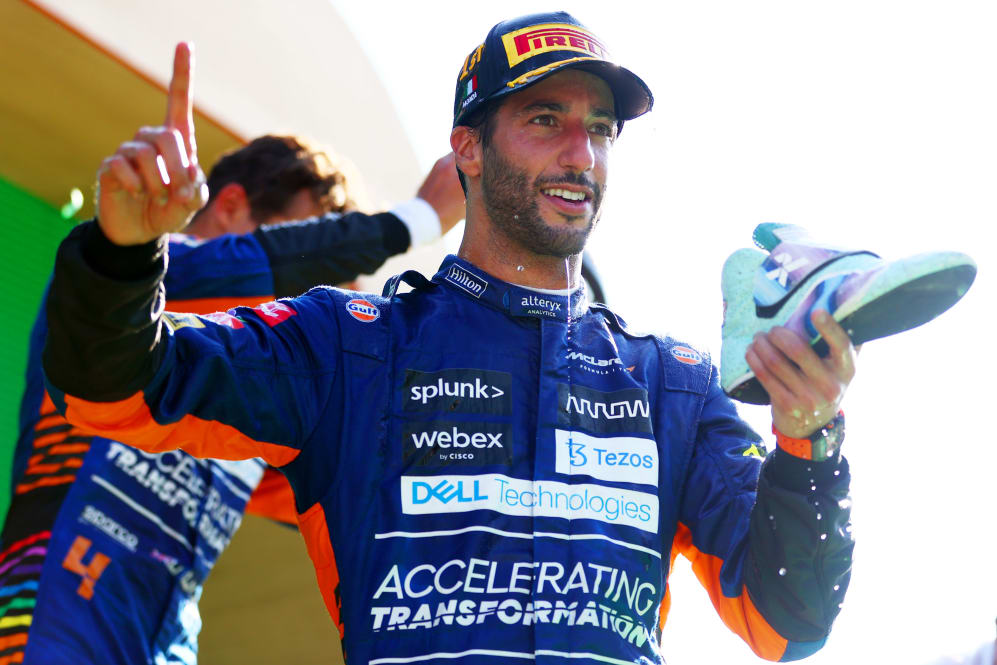 Ricciardo was a man on a mission around the streets of Monaco in 2018, declaring that “it’s my ******* time” over the radio after storming to the second pole position of his F1 career at that point – and the first P1 grid slot since his weekend unravelled in the Principality two years earlier.

It all started well on race day, with Ricciardo maintaining his lead and no signs of any drama. But then, on Lap 28 of 78, he reported a loss of power that was in fact a full MGU-K failure, robbing him of crucial performance and a couple of gears.

What followed was an extreme test of mind and body as he came under intense pressure from Ferrari rival Vettel while working through the problems – which also led to his brakes overheating – and trying to keep the memories of 2016 at bay.

“I don’t know how you did that, Daniel...” aptly commented Ricciardo’s race engineer after he crossed the line to see out a victory that arguably remains the best of his eight-strong collection to date.

Do you agree with our #1 choice? Cast your vote in the poll below...