The FIA President began the meeting by thanking the Automobile Club d'Italia (ACI) and its President, Angelo Sticchi Damiani, for hosting the week’s events.

In his opening address, the President provided an overview of the significant milestones achieved in 2022. He also acknowledged that the meeting in Bologna would be the last appearance of Mattia Binotto on the World Motor Sport Council and thanked him for his contribution as the F1 Commission's Delegate.

He said: “Almost a year ago, we, as a team, were chosen in order to lead the FIA into a new era. All together, we worked hard in order to implement the goals that we presented in the manifesto.

“As 2022 draws to a close, I am proud of how the WMSC has tackled the challenges we faced. We had to deal with the 2021 Abu Dhabi Report and the Ukrainian crisis during the first three months of my mandate. We worked hard to restructure the FIA, including the appointment of our first CEO, and we worked in a transparent way in order to significantly reduce our operating deficit.

“We launched a number of initiatives to empower the regions with the objective of putting Clubs at the heart of our projects. As you know, doubling participation is a goal that is dear to me, and we are making our sport more accessible, affordable and diverse in order to achieve this. As part of that objective, we are launching our affordable Cross Car initiative from 2023.

“With the support of Council Members, we approved the F1 Power Unit Regulations for 2026 – a major technical landmark for the sport which led to entry of Audi in to Formula 1. We also completed our first successful year of Financial Regulations in F1 and the first phase of our Race Direction Development Programme.

“We have also launched the Engineering Scholarship, made great strides in EDI and we are forging ahead with our mission to address online abuse.

“This past year has been one of intense activity and I would like to thank Council Members for their commitment and invaluable cooperation throughout the year. Our objective to create a truly global, financially sustainable, and Member-led FIA is well underway.”

In a further innovation to the strategic planning ahead of the main WMSC, Tuesday’s strategy meeting included a presentation about the future of rallying, hosted by FIA Rally Director Andrew Wheatley and WRC Promoter's Senior Director Sport Peter Thul. The discussion, based on the rally pyramid, addressed current challenges and opportunities for rally and the WRC, and covered proposals to engage with new manufacturers and technologies, develop the next generation of competitors, leverage the promotion and expand the fan base, with the collaboration with ASNs and cost saving in the foreground.

Further presentations from fellow world championship promoters are planned ahead of WMSC meetings throughout 2023.

The following is a summary of decisions taken at today’s WMSC meeting:

Following the announcement that the 2023 FIA Formula 1 Chinese Grand Prix will not take place, the calendar is updated as follows: The six events in 2023 that will include Sprint sessions were confirmed today as follows:

Mohammed Ben Sulayem, President of the FIA said: “Following strong collaboration between the FIA and FOM, and the approval of the World Motor Sport Council, we are pleased to reveal the six events for Sprints for the 2023 season. We look forward to this exciting addition to the calendar.”

Minor changes to the 2023 Technical Regulations were approved.

A significant increase in the required strength of Roll Hoops was approved for 2024 as part of the continual commitment to improving safety standards in the sport. These updates mean that test loads are applied more horizontally to require better fixing of the roll hoop to the chassis structure.

The World Council also approved several updates and clarifications to the 2023 and 2024 Financial Regulations, including an increase of the forfeit allowance amount for each Sprint session from $150k to $300k from 2023 onwards, and the elimination of any subsequent adjustment for accident damage sustained during the Sprint sessions.

The Council Members received an update regarding the ongoing projects discussed at the most recent Formula 1 Commission meeting, a summary of which can be found here.

In summary, the key changes to the protocol are: Attendees that are not ‘fit to attend’ (i.e. those having COVID-19 symptoms or a confirmed COVID-19 infection) will not be authorized to enter ‘high density’ areas. No requirement for attendees to be vaccinated against COVID-19 to enter high-density areas. The FIA will no longer organize on-site testing facilities but will inform stakeholders about test facilities available locally to venues.

In the Sporting Regulations, WRC support series have been renamed to clarify the position and purpose of each of the categories

In that respect, FIA WRC2 Open and WRC3 Open become FIA WRC2 and FIA WRC3 respectively. The FIA WRC2 Junior Championship is renamed FIA WRC2 Challenger for competitors with reduced experience who have not previously won the support series for Rally2-specification cars and have not been nominated to score WRC manufacturer points. In this sense, age is no longer a defining criterion.

Following a successful inaugural season for the FIA WRC2 Masters Cup, with 29 drivers registering for the series, the category becomes FIA Masters Cup to include drivers and co-drivers from the RC2/3/4/5 and R-GT classes, while the R-GT Cup is consequently removed.

Sporting and Technical Regulations for the 2023 FIA World Endurance Championship were approved.

In order to make qualifying easier to follow, to guarantee the competitors sufficient driving time and to broaden the window of optimal conditions for setting times, Qualifying will be composed of three separate 15-minute sessions, with a dedicated session per class, as opposed to the previous format of two sessions, one for prototypes (including Hypercar and LMP2-classes) and one for GT cars.

Manufacturers competing for the FIA Hypercar World Endurance Championship must enter at least one and a maximum of two cars. Any additional cars from the same manufacturer must be entered in the new Hypercar Team’s World Cup classification.

Further principles of the future GT class in the FIA World Endurance Championship, incoming in 2024, were approved. The class based on the current FIA GT3 technical platform will be called LMGT3. In line with the regulations of the Hypercar class, torque meter sensors will be mandatory in order to enable live monitoring of powertrain performance. Dedicated bodywork conversion kits will be permitted but not mandatory.

The homologation period for the LMP2 cars was extended until the end of 2025.

The 2022/23 ABB FIA Formula E World Championship schedule was revised with the addition of a race in the American city of Portland on 24 June.

The United States has been a regular fixture on the Formula E calendar since the beginning, with Miami and Long Beach welcoming the all-electric single-seater series in its first two seasons before the championship moved to New York, whose Brooklyn Street Circuit has staged 10 races since Season Three (2016-17). Portland, Oregon will host round 12 of the forthcoming campaign, which will comprise a total of 16 races across 11 events. The date previously listed as TBC at the end of May has now been removed.

The WMSC also approved the introduction of a Free Practice Only E-Licence as an opportunity for potential new Formula E drivers to acquire running time in FP1 without needing to hold a full E-Licence, in a similar manner to the existing F1 FP Only Super Licence.

At the request of the manufacturers involved, the “Equivalence of Technology”, applying to vehicles entered in the T1.U and T1+ classes, will allow to adjust, if necessary, the level of longitudinal acceleration during marathon rallies such as the Dakar. This system is intended to allow more sporting fairness between cars of different engineering designs and limit cost escalation.

With the aim to limit the environmental footprint, tyre manufacturers will have to nominate for Platinum and Gold Priority drivers a single compound for each rally, starting with the Abu Dhabi Desert Challenge.

The 2023 FIA World Rallycross Championship calendar was approved as follows: The 2023 calendar features 8 events/10 rounds on three continents and a return to a more traditional racing format, with four heats with races for five cars maximum (where grids are decided by results of the previous heat), and semi-finals with six cars. Superpole will be retained from the 2022 format.

The 2023 Sporting and Technical Regulations for the FIA Formula 2 and Formula 3 Championships were approved by the World Council.

In the FIA Regional Rally Sporting Regulations, the format of the FIA European Rally Trophy has been entirely revised and simplified to develop the reputation of the series and create attractiveness for competitors, in particular by giving drivers of 2WD cars a chance to contest an FIA title. Hankook was approved as the official tyre supplier to the FIA Junior ERC Championship.

2023 Goodyear FIA ETRC Sporting Regulations and Technical Regulations (allowing all-electric and hybrid powertrains along with the current generation of combustion engines) were approved. A new European Young Star Trophy for drivers under the age of 30 will be introduced for the 2023 season.

Council Members approved the introduction of a Free Practice Only E-Licence as an opportunity for potential new Formula E drivers to acquire running time in FP1 without needing to hold a full E-Licence, in a similar manner to the existing F1 FP Only Super Licence.

There was approval of changes to the regulatory text contained in Appendix L – Code of Driving Conduct on Circuit. The change strengthens the definition of “crossing” the line separating cars entering and exiting the pit lane from those on track. The new regulation will be effective from January 1, 2023 together with changes that were approved during the October WMSC to regulate the appropriate and safe driver conduct within the Pit Lane itself.

Council Members approved the choice of Valencia as host of the next FIA Motorsport Games in 2024.

A simplification of the current motor sport competitions’ structure (by eliminating all zones except the Central Europe Zone) while facilitating the development of promotional level of motor sport between ASNs. The ASN Development Series concept will allow the ASNs not being part of the Central Europe Zone to organise competitions of a National Championship outside of its national territory.

All 2023 sporting calendars are available here 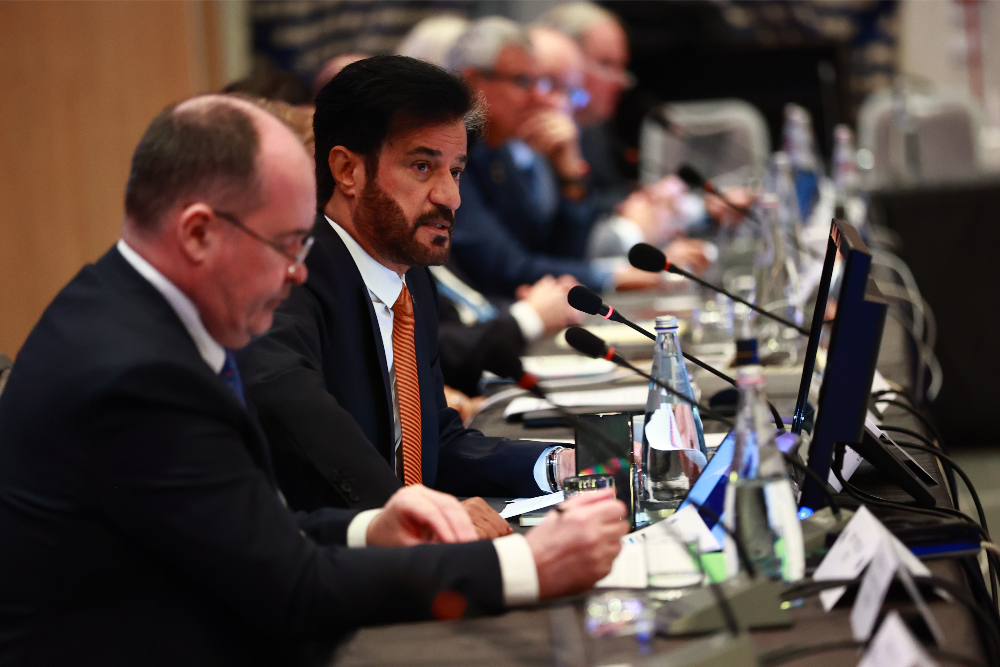