In the round-up: The FIA have reportedly offered the terms of an Accepted Breach Agreement to Red Bull after finding they breached the budget cap last year.

The BBC reports the FIA have submitted to Red Bull their terms for an Accepted Breach Agreement – a mechanism in the financial regulations where a team in breach accepts they overspent on the budget cap and agree to be penalised according to the terms outlined. If Red Bull refuse the agreement, they will be referred to an adjudication panel which will decide what punishment to hand them if they are considered to have overspent.

Red Bull have insisted that they did not exceed the budget cap last year when Max Verstappen won his first Formula 1 drivers’ championship. Asked yesterday whether he was concerned accepting such an agreement would be seen as an admission of guilt, Verstappen said: “I’ll see at that time, if we ever get to that stage.”

Haas F1 team have announced a new title sponsor that will join them for the 2023 season having run the entire year without the support of a title partner.

Ahead of the team’s home grand prix in the United States, Haas announced a new sponsorship deal with financial tech company MoneyGram. From next season, the team will feature the company’s logo on their car with a revised livery.

The team were previously sponsored by a Russian chemical company, who were title sponsors for the 2021 season and were set to be again this year before Haas broke ties with them after Russia invaded Ukraine. 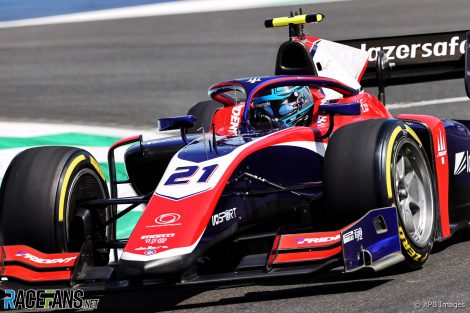 Williams won’t be on the F2 grid in Abu Dhabi Formula 2 team Trident have announced that Calan Williams will not compete in the final round of the championship in Abu Dhabi next month.

Williams, who was racing in his first season in the series, competed in all 26 rounds prior to the final race weekend in Abu Dhabi alongside Richard Verschoor. The 22-year-old was 23rd in the drivers’ championship, with his only points of the season coming with a fourth place finish in Jeddah.

“Throughout the season, I know I demonstrated my capability at Formula 2 level,” said Williams. “Jeddah was a great result and I have been very pleased with many of the races I have put together in my rookie season, often finishing just outside the points or experiencing misfortune when running inside the scoring positions.

“However, these things can happen in racing, and as the season progressed circumstances just did not fall my way. We are now at a point where it is important that I consider what is the best path for me to pursue in the interests of my ongoing career in motorsport.”

"McLaren CEO Brown last week wrote a letter to FIA president Mohammed Ben Sulayem – subsequently leaked – arguing Red Bull’s overspend "constitutes cheating" and calling for a reduction in their 2023 cap equal to double their overspend, plus a 20 per cent reduction in CFD and wind tunnel time. Christian Horner, the Red Bull team principal, is said to be furious at that letter, and the speculation which has been allowed to take place both before and after last Monday’s ruling."

"I think it's going faster in terms of diversity and inclusion than it's ever gone, and in a short amount of time. That's what Formula 1 has done as far as people of color. Formula 1 sees that this is something that they are absolutely going to be involved with to grow the sport."

"We always have to think that the US is a big country and to have three races, it's still not enough, I believe. There is something for everybody and I think each event has something in particular about it. Two of them have done a good job and I'm sure Las Vegas will do a good job as well."

"We listed down every McLaren F1 driver in history and then scratched off the drivers currently racing for other teams on the grid because they'd be unavailable to us in this draft. To qualify for selection, the driver had to have started every race during an entire Formula 1 season for McLaren."

"It’s very nice that such a long and tough season is ending here and it will be particularly good as so many of friends of the Prema team and the FDA family will be in the crowd. As for myself I have just one goal in mind, winning the title. It’s going to be a fun weekend I can’t wait to get on track."

"He was happy I got the (F1 practice) opportunity in Austin (for this weekend’s U.S. Grand Prix). We’re good. I talk to him as much as I did in January of 2022. There’s no difference in the relationship."

"Multimatic Motorsports recently became the first team to run a race car at 120mph through the tunnel and, seeing good initial results with its benchmark Mazda DPi car, booked up plenty of future tunnel time for the development of the incredible race, road and track-day cars created by Multimatic Special Vehicle Operations."

"The seventh episode of #TheRacingLine is here - your guide to all things F1 and F1 22, featuring DurkChocolate and Haydon Gullis!"

This video is real. We promise. 🐴 @DanielRicciardo #USGP 🇺🇸 pic.twitter.com/hWekL5T2o7

|@danielricciardo and the horse he rode in on. Its paddock pass reveals its identity to be "Horsey McHorse". #F1 #USGP #RaceFans pic.twitter.com/lVzjCDqGOX

Carrying 50 stars across each car this weekend for our home race 🇺🇸#HaasF1 #USGP pic.twitter.com/w0ps7Xp2uV

"You can't grow a beard yet huh?" 😂 pic.twitter.com/FBgxilTgix

I know, it’s for protection – but I remember how cool it was to have a different helmet design each race. In Austin I was wearing a pinball machine. Also because that was how it felt like to drive the Caterham. pic.twitter.com/829xCJTDv4

.@MichaelAndretti is here @COTA as he continues his quest to buy into @F1. pic.twitter.com/qDW1cqAcSc

Speaking with Nicholas Latifi, says that recent IndyCar reports of him joining the series or Chip Ganassi Racing weren't true that:

"..It's poor journalism..I haven't decided what I'm doing." Latifi went on to explain that he's still evaluating other championships teams.

The @astonmartin Safety Car did not have to go this hard on a Thursday. And yet… 🥵#USGP #F1 pic.twitter.com/R4IlWrmTOZ