Esploratore commented on the post, Still your favourite race after 10 years: Can anything top the 2012 Brazilian GP?

For the past 15 years, RaceFans has invited readers to rate every Formula 1 race during the season. In that time we’ve built up a fascinating index of your favourite grands prix, as well as the most disappointing ones.

But over the 10 years nothing has displaced the championship-deciding final race of the 2012 season from the top of the list. That year’s Brazilian Grand Prix at Interlagos was the race which seemed to have everything.

Sebastian Vettel and Fernando Alonso facing off to see which of them would be the first to take a third world title. Lewis Hamilton bidding farewell to McLaren in a race-long scrap for victory with team mate Jenson Button and – astonishingly – Nico Hulkenberg’s Force India.

Michael Schumacher bowing out of F1. The minnow teams fighting over the final prize money place in the championship. A rain-affected race full of spins, incidents and even – thanks to Kimi Raikkonen – a moment of absurd comedy.

Will we ever see another race to rival the 2012 Brazilian Grand Prix for drama? 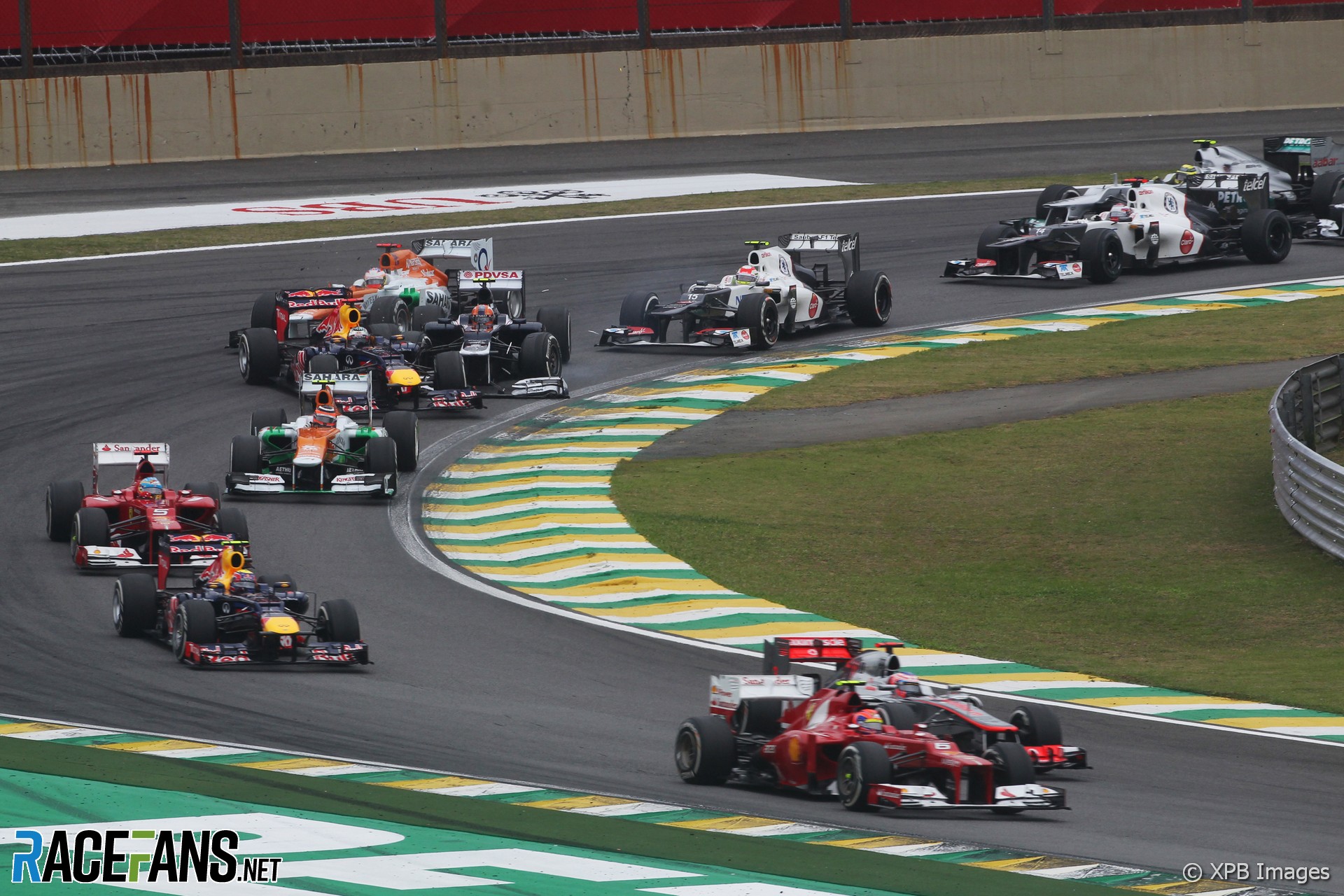 Title favourite Vettel was knocked into a spin on lap one

Vettel and Red Bull team mate Mark Webber occupied the second row of the grid behind pole-winner Hamilton and the other McLaren of Button. But the Red Bull pair started poorly and came under attack from behind.

Webber gave his team mate little room at turn one, which Vettel did not forget, while the Ferraris attacked. Felipe Massa split the McLarens for second while Alonso, crucially, moved ahead of Vettel.

It got worse for Vettel as they reached Descida do Lago. Braking cautiously for the corner, he was almost hit from behind by Kimi Raikkonen who took urgent evasive action. Then as Vettel ambitiously went for the apex from the outside, he crowded Bruno Senna and was knocked into a spin by the Williams.

Vettel rolled backwards, kept his engine running, then motored off in pursuit of the rest of the field. But the left-hand side of his car’s floor had taken a hefty hit, and his afternoon had just got a lot more difficult. 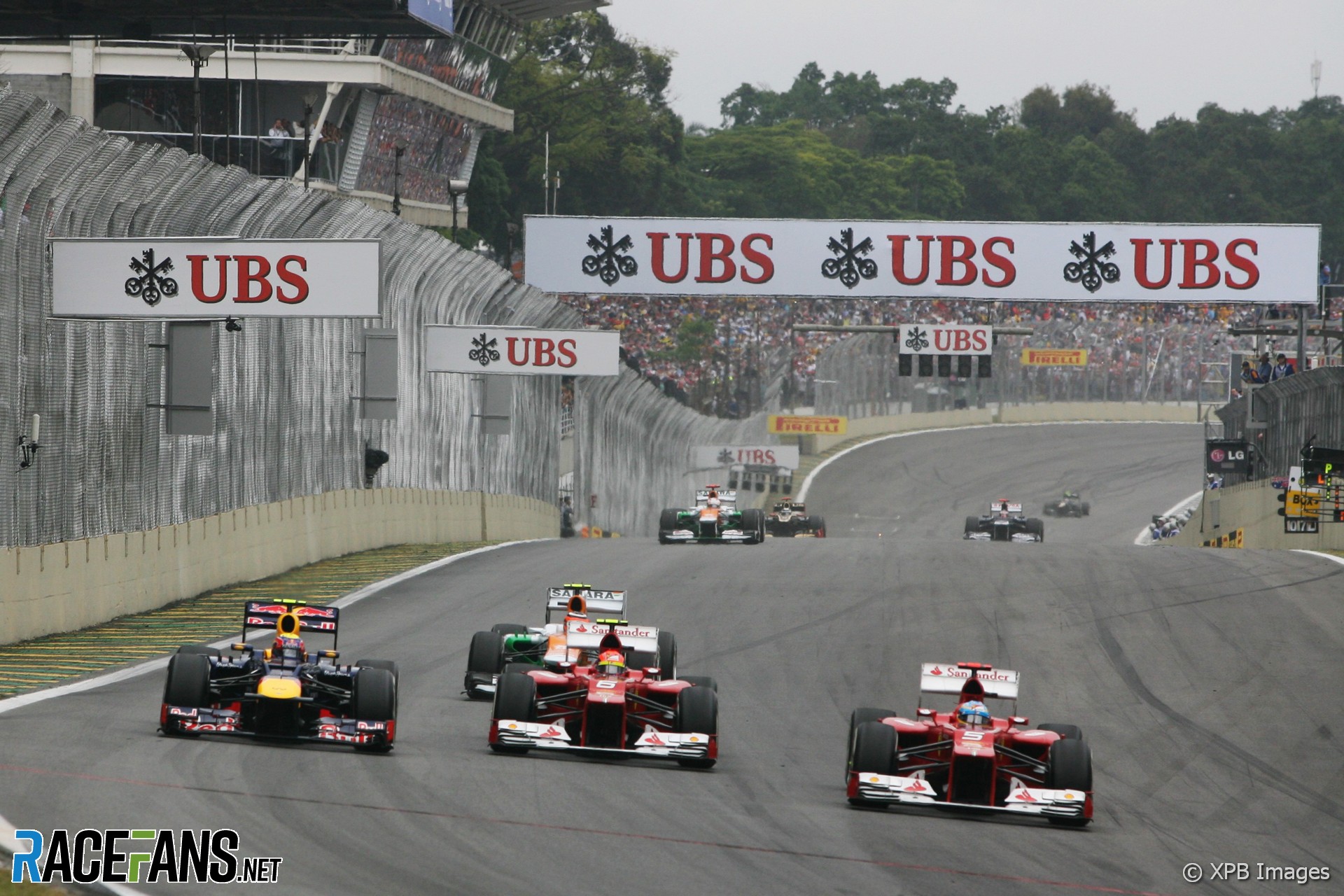 Alonso passed two at once as lap two began

It got worse for Vettel soon afterwards. While his team mate attacked Massa, who had fallen back to third, Alonso launched down the inside of the pair of them. 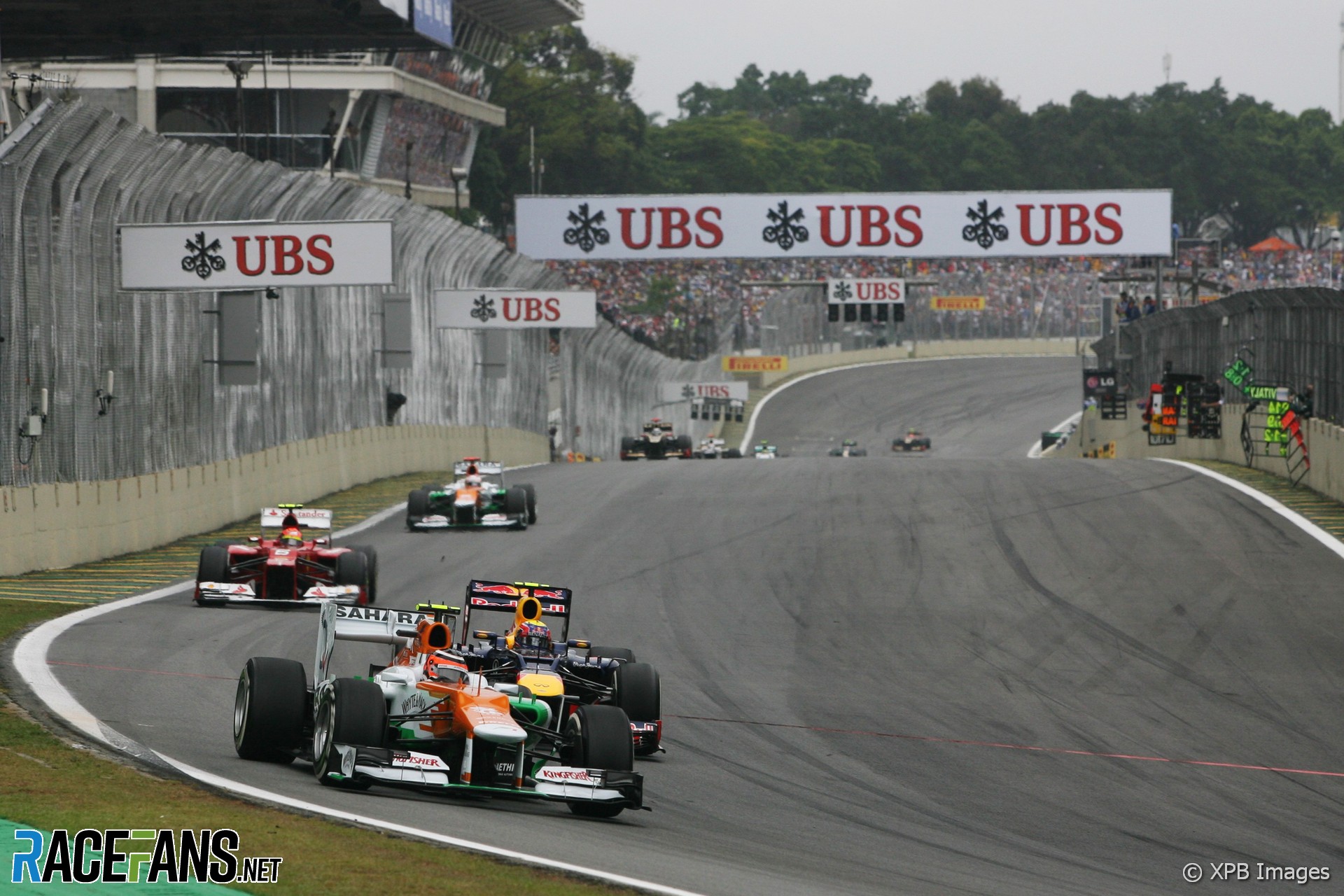 Hulkenberg put in a remarkable performance for Force India

Alonso’s grip on the podium places did not last, however. Hulkenberg was flying in the Force India, taking fourth place away from Webber, then grabbing third as drizzle started to fall and Alonso skidded off at the Senna S. But the Ferrari driver was still 16 places ahead of his championship rival. 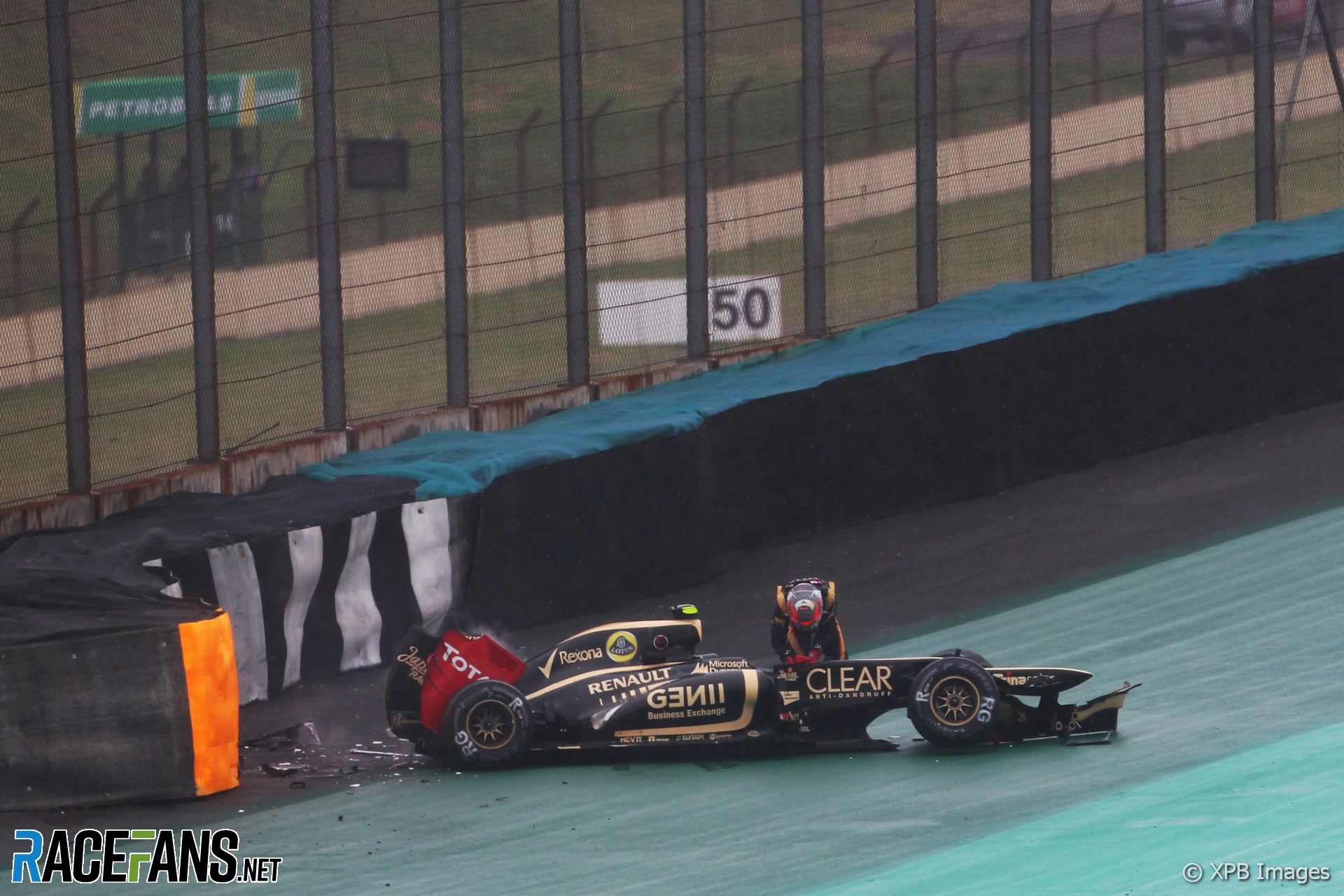 Grosjean crashed, as he did too often in 2012

The rain caught out others, too: Webber had a spin and Romain Grosjean crashed out of the race at Mergulho on lap six. Vettel was making rapid progress, meanwhile, recovering to eighth place by lap eight. 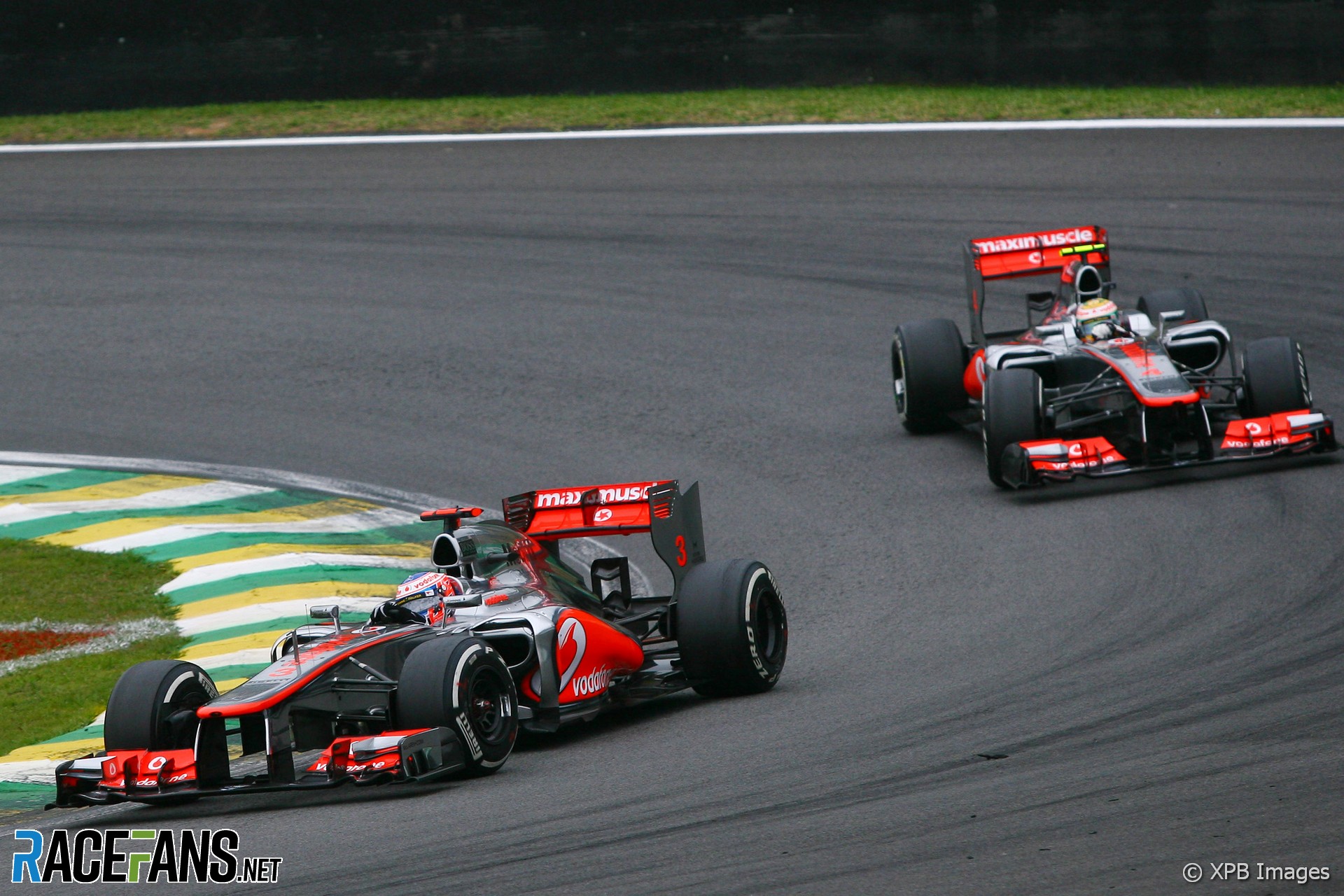 The McLaren pair exchanged the lead 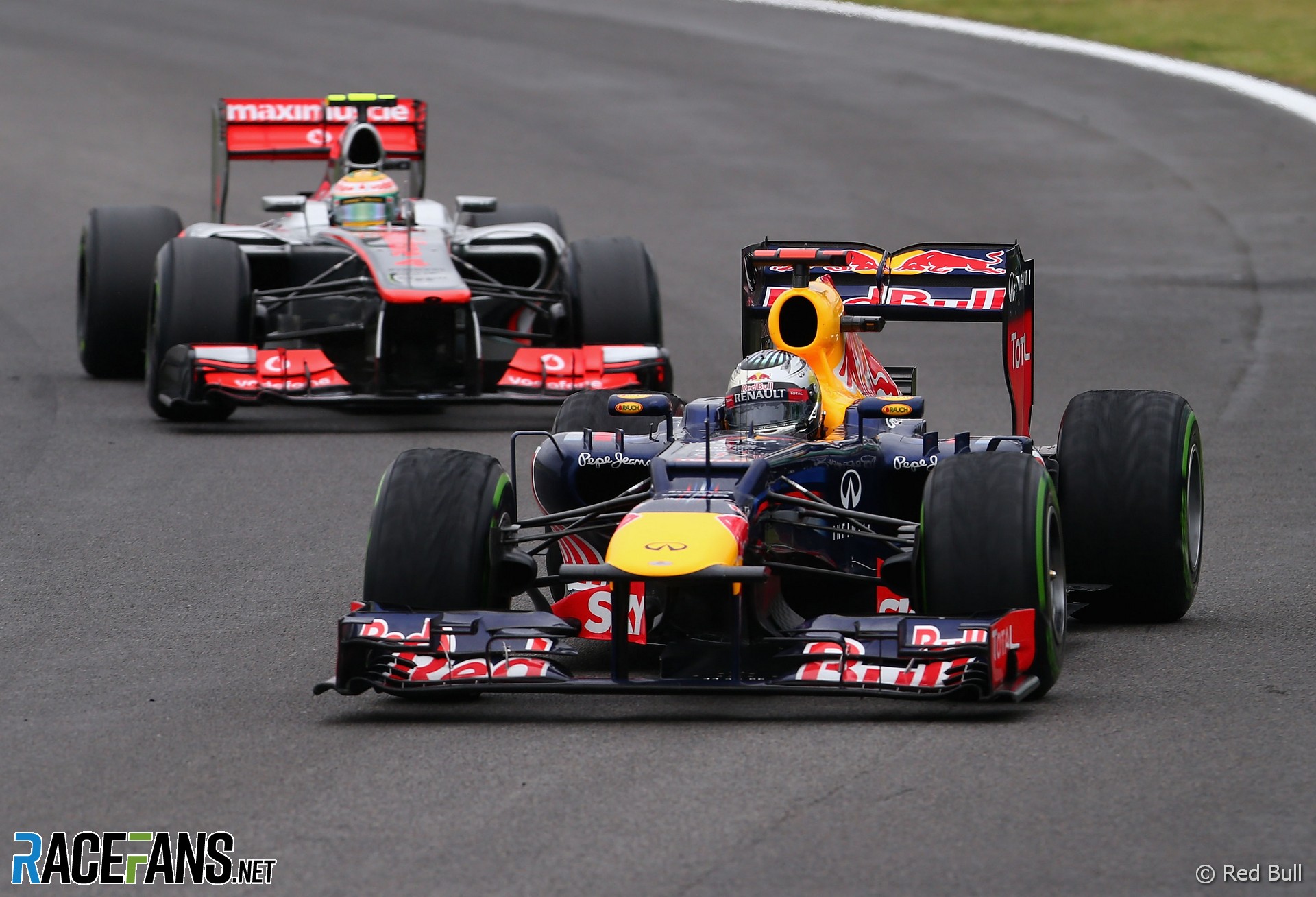 The damp conditions prompted several drivers to pit for intermediates, including the title contenders, who shadowed each others’ strategic moves. Leader Button stayed out, as did Hulkenberg, who moved up to second as Hamilton came in and lost time with a slow stop. 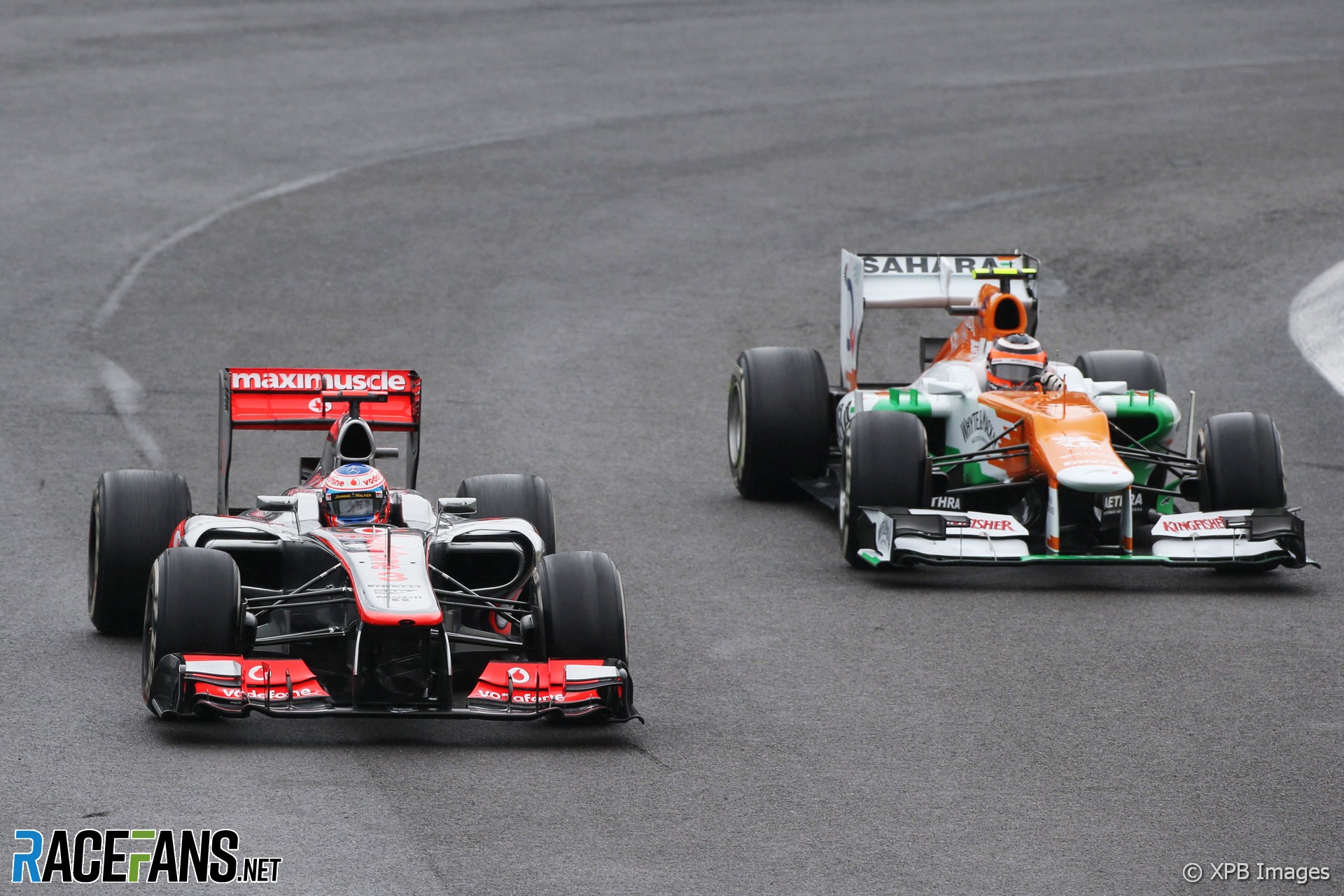 By lap 17 the track was thoroughly damp yet the leaders persevered with their slicks. Now Hulkenberg was on Button’s tail and two laps later he sensationally passed his rival for the lead. “I don’t think I’ve ever commentated on 20 laps like that,” remarked Martin Brundle in the commentary box. 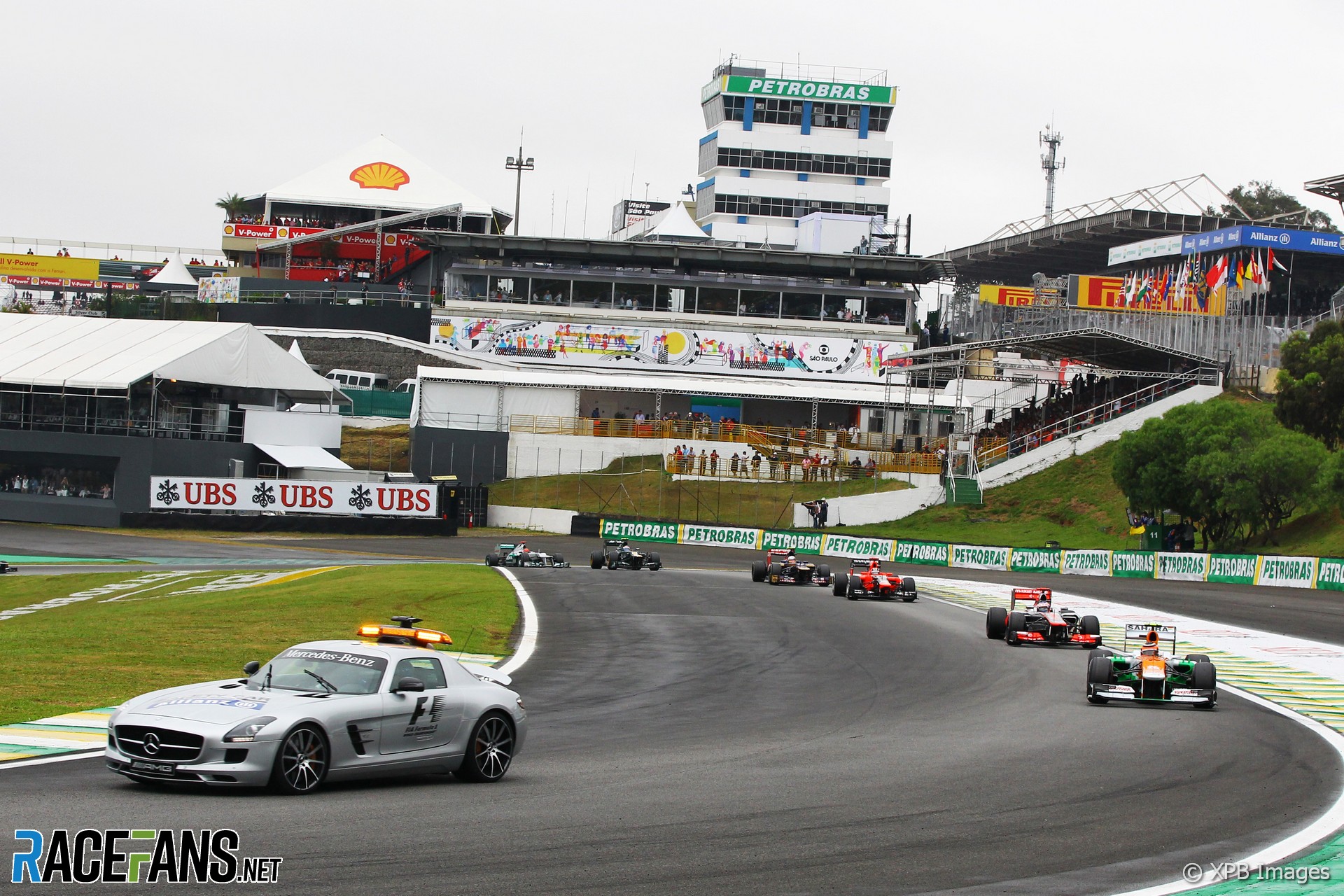 The Safety Car was summoned due to debris

Soon the track was drying again and those who pitted for intermediates returned to their garages for slicks, leaving Hulkenberg and Button leading by around 50 seconds.

However a series of incidents had left the track strewn with debris. Nico Rosberg suffered a right-rear puncture, and Alonso complained on his radio about the mess on the track. The Safety Car was deployed, and the advantage Hulkenberg and Button had built up was eradicated, though they at least had the opportunity to fit fresh tyres. 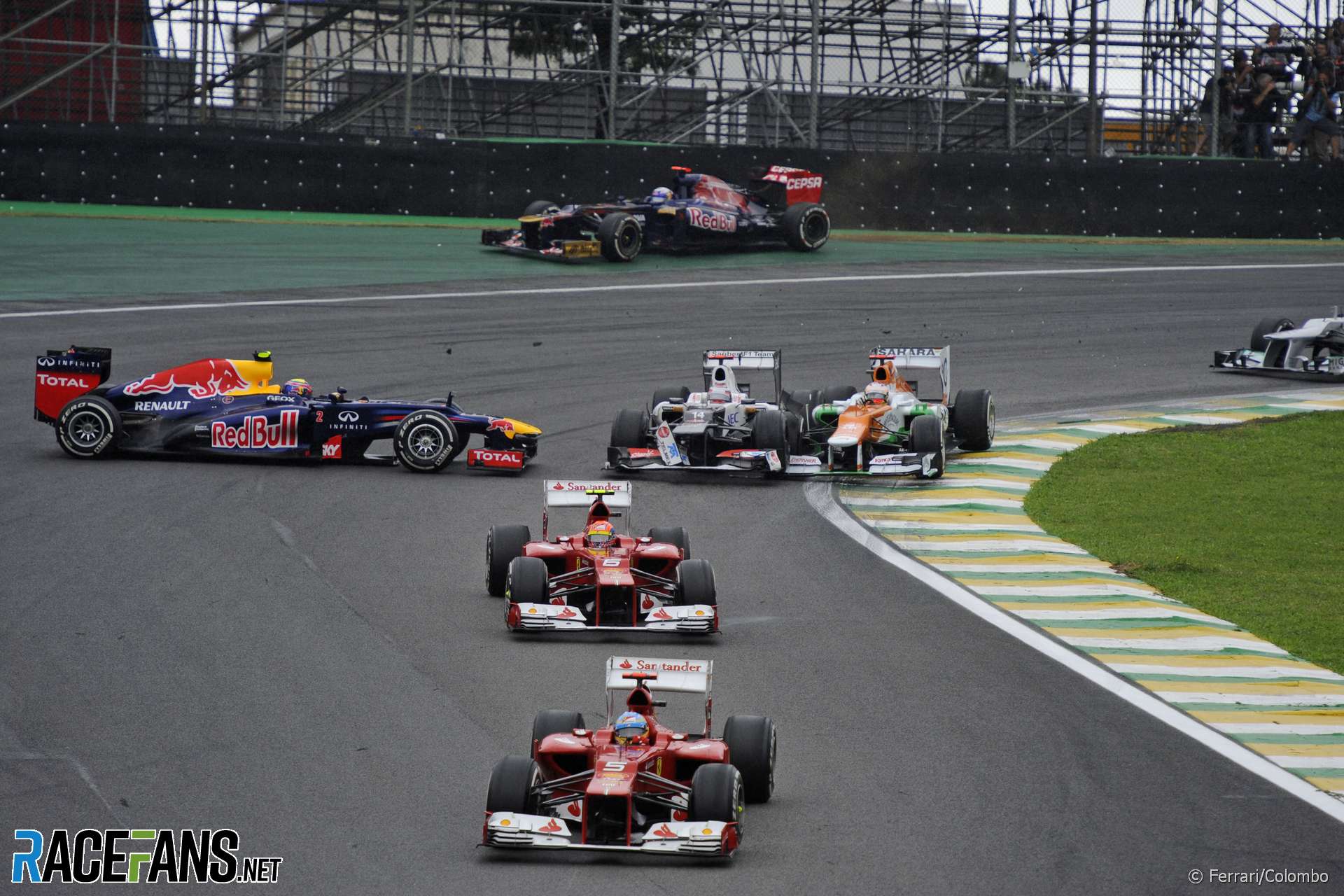 The drama resumed immediately after the race restarted

After seven laps behind the Safety Car the race resumed and so did the action, Webber spinning while others tangled behind him. 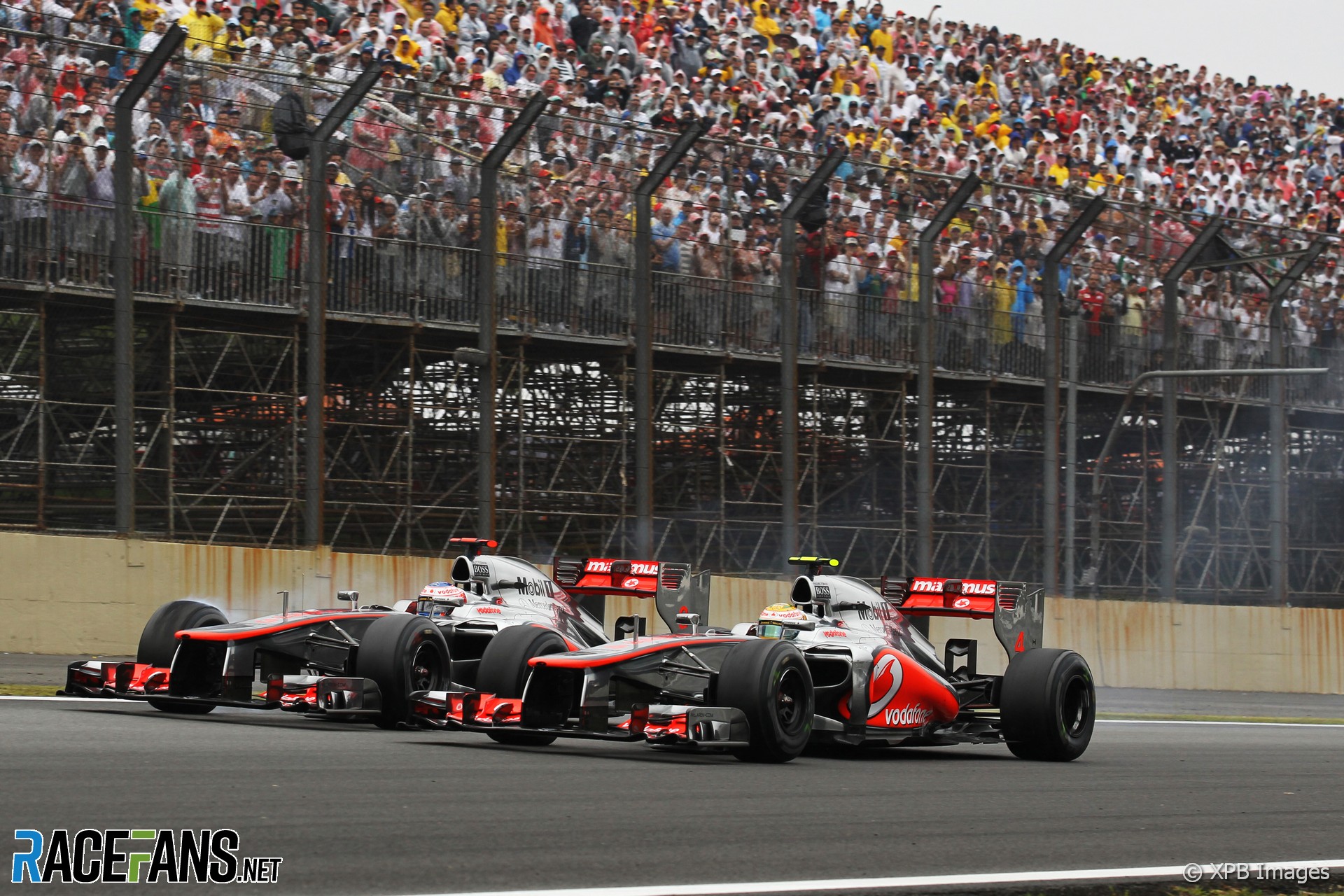 Now the track was drying, and several drivers were on the move, notably Hamilton who took second place off Button and went after leader Hulkenberg. Kamui Kobayashi temporarily took fourth place off Alonso, only to lose the place at the start of the next lap.

Vettel briefly ran immediately behind Alonso during that exchange, but then lost a position to the other Ferrari of Massa. The Red Bull driver was still on course to win the title, but as lap times fell the handling problems in his damaged car became more severe, and he caught a huge slide at Juncao on lap 38. 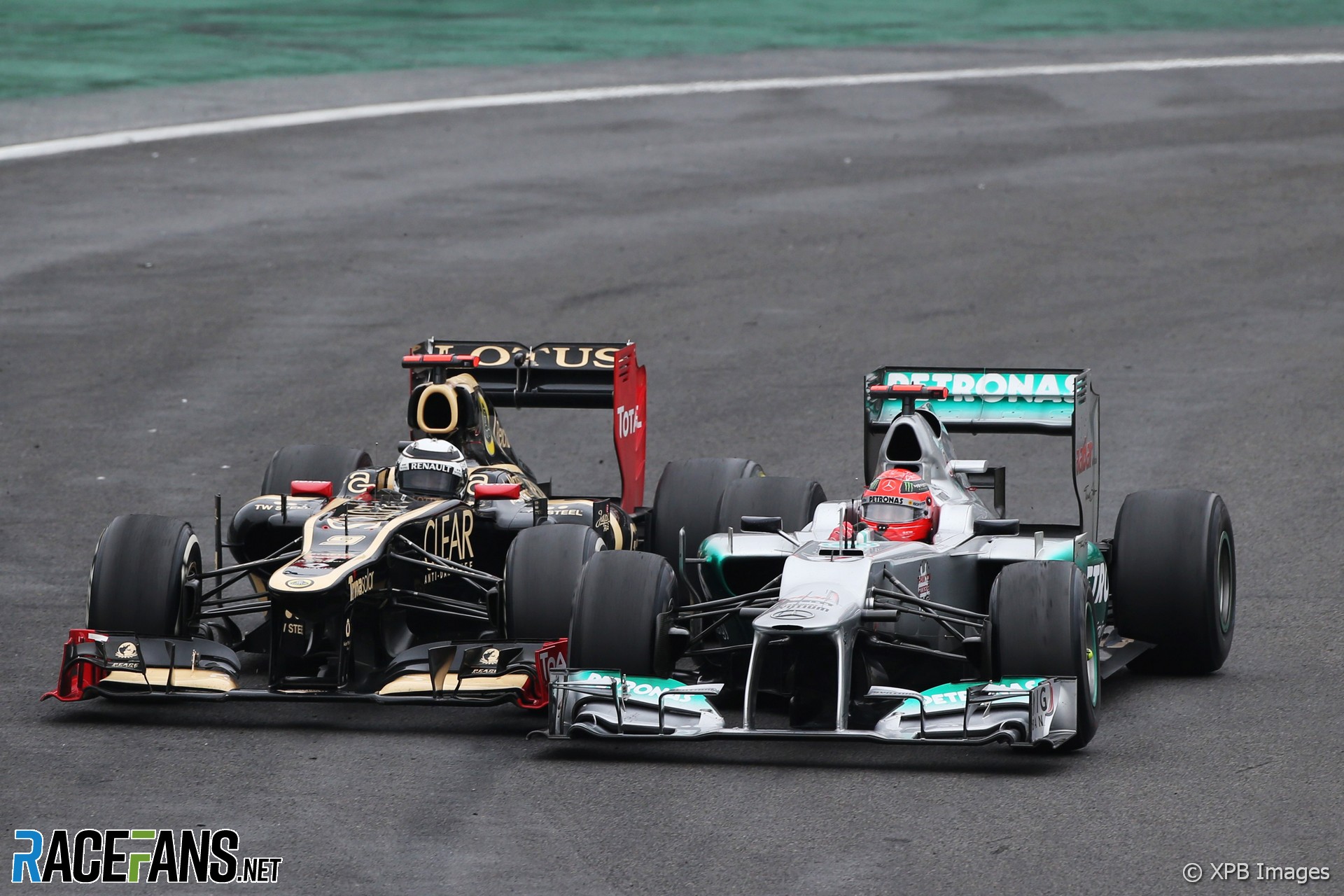 Schumacher put up a fight against Raikkonen

Schumacher was driving his final race but was in no mood to make way for his former adversaries. He defended firmly against Raikkonen when the Lotus driver passed him, the pair going wheel-to-wheel through the Senna S. 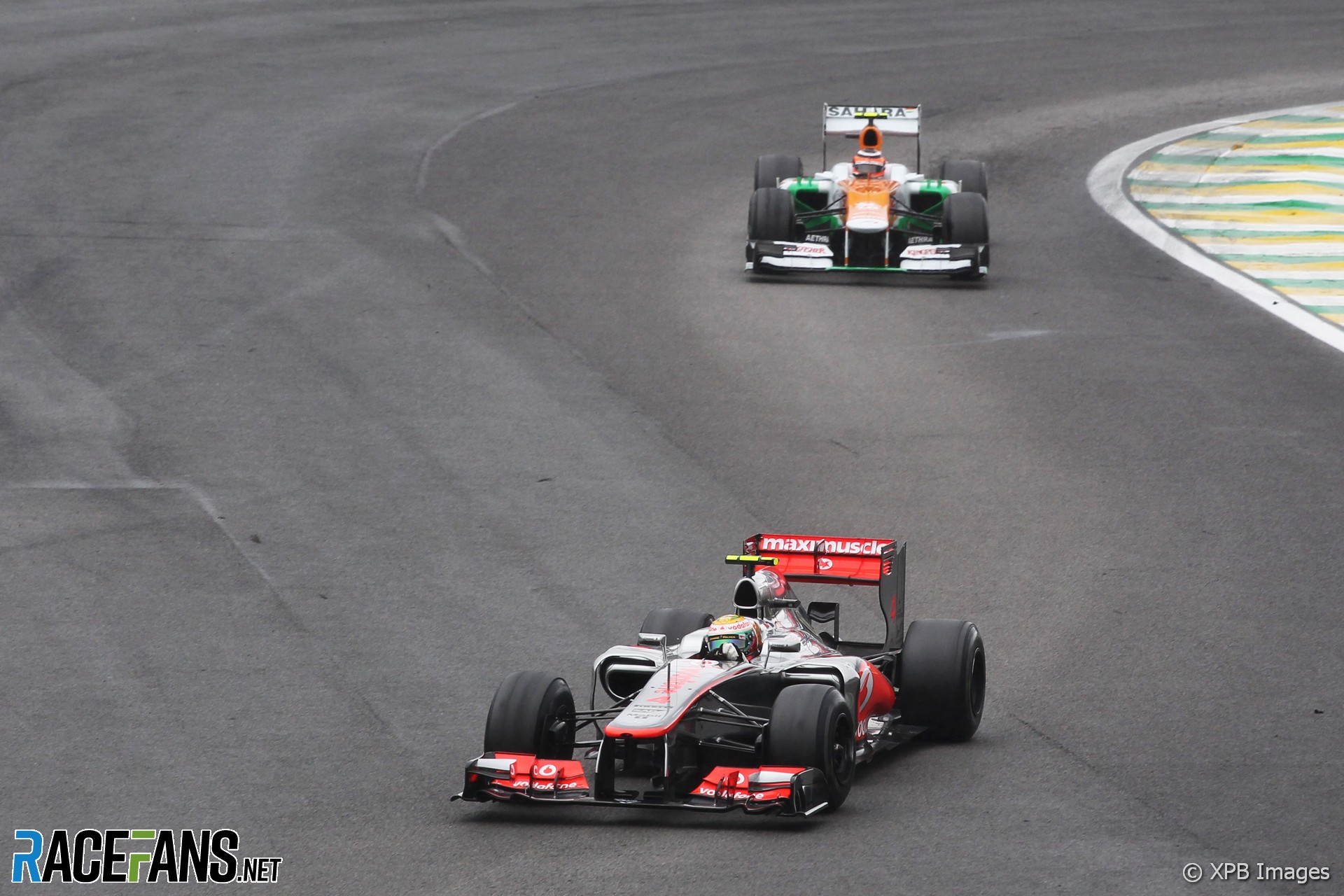 By lap 44 light rain had returned. Hamilton drew closer to Hulkenberg and grabbed the lead when the Force India driver skidded in the midfield on lap 48. 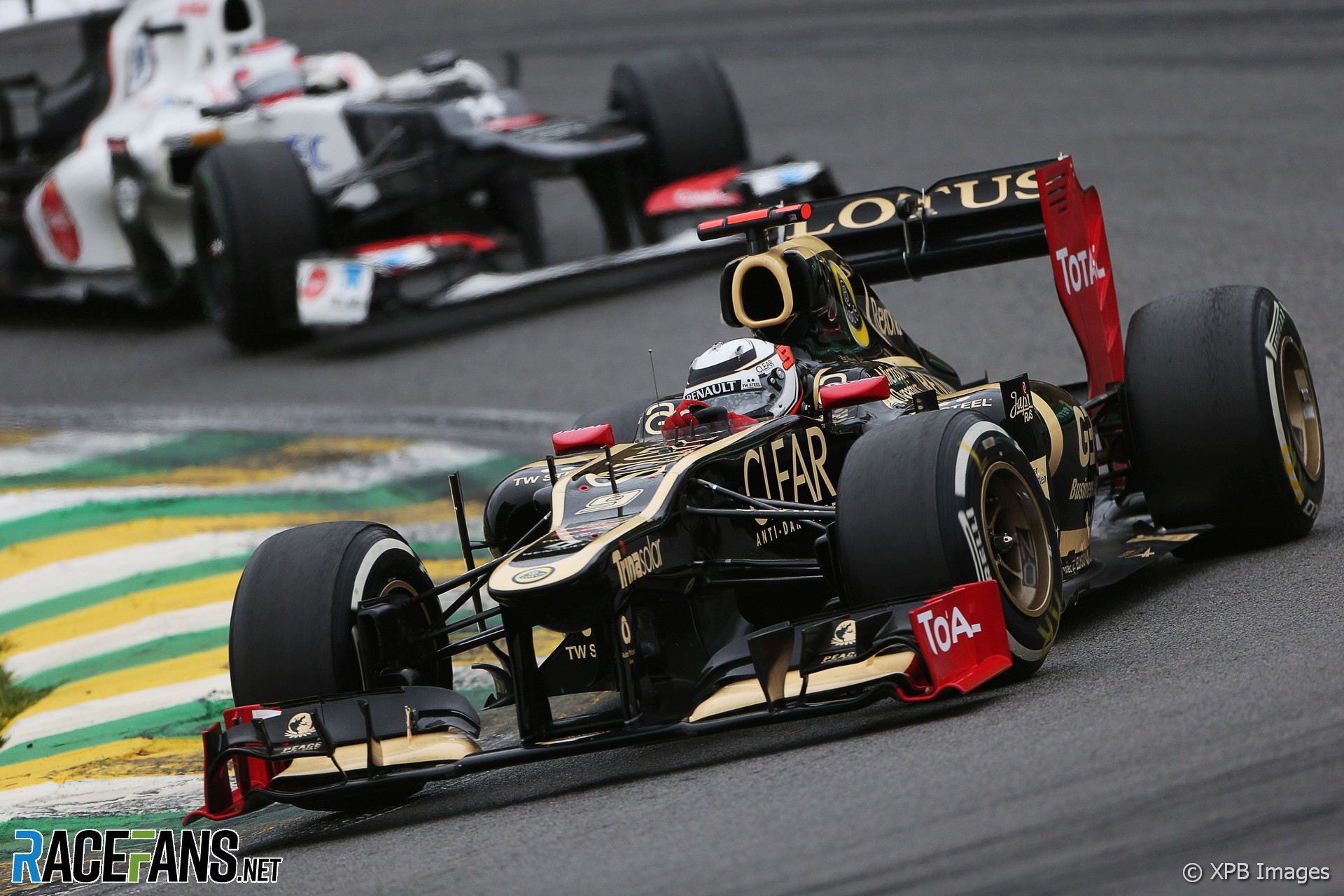 For those finding the nail-biting title fight a little tense, Raikkonen supplied some light relief on the 53rd tour. Having gone off at Juncao, he attempted to rejoin using an old section of track, unaware that it was blocked off before it connected to the live circuit. The Lotus driver pulled up, performed a quick U-turn and navigated his way back to the track. 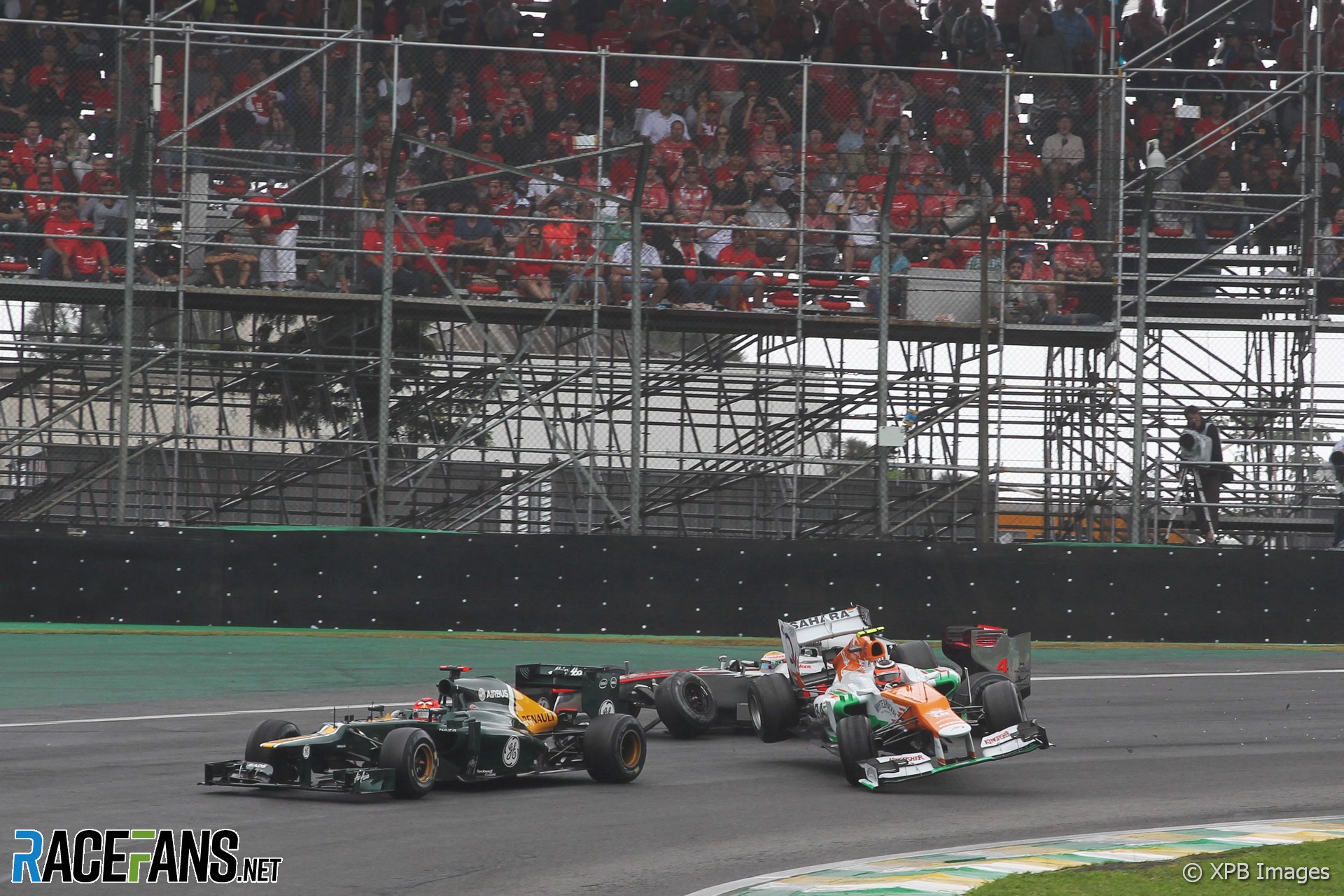 This race was the last time F1 enjoyed a 24-car field, which meant the leaders had a lot of traffic to contend with on the short Interlagos circuit. Hamilton had his hands full of backmarkers which allowed Hulkenberg to draw back within range and make a dive for the lead at the first corner.

But the Force India driver misjudged the available grip and skidded into his rival, leaving Hamilton with terminal damage, collecting a penalty and handing the lead to Button.

It also moved the title rivals up a place each, and allowed Alonso to cut two more points out of Vettel’s advantage. But the worsening rain was about to complicate matters again. 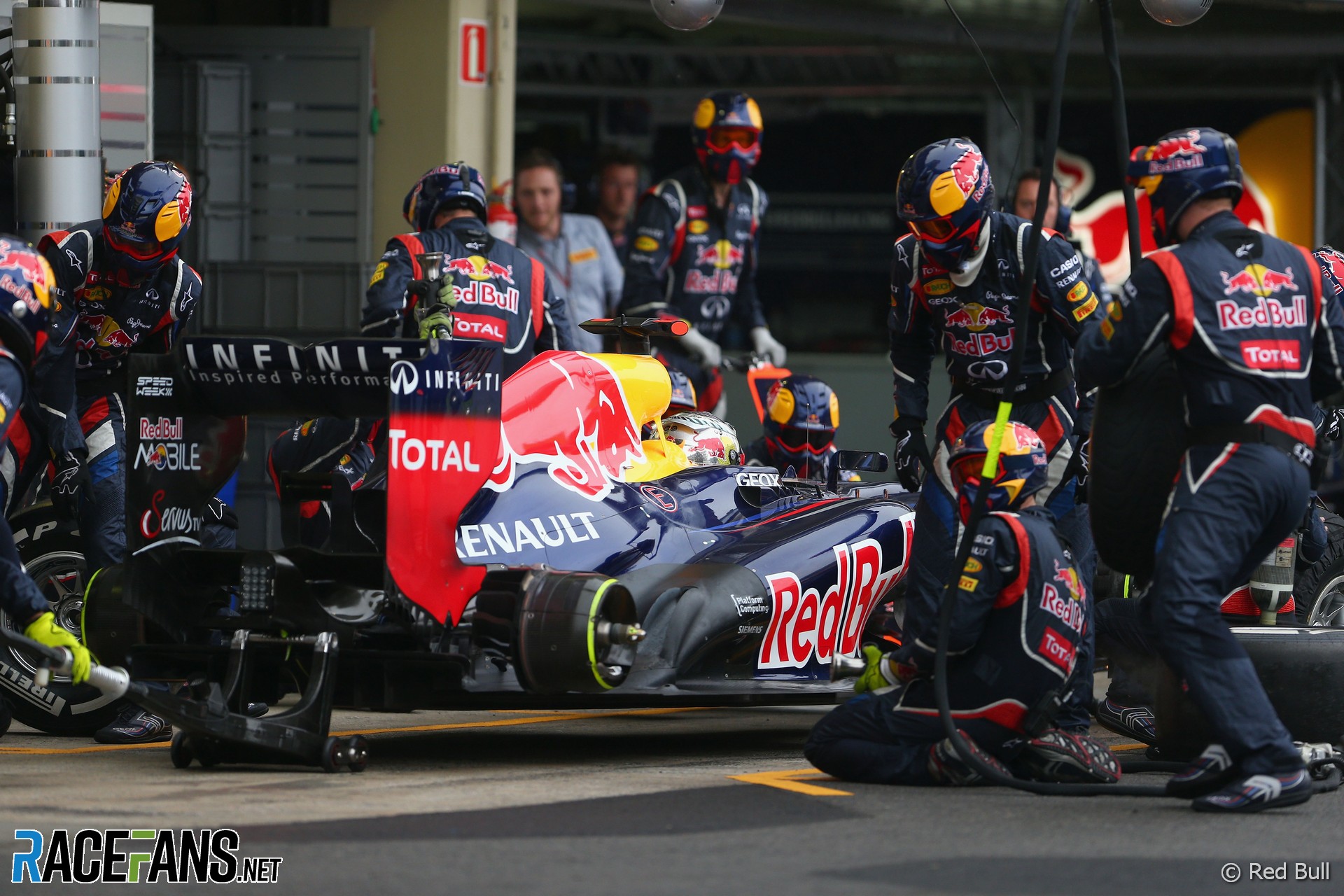 Vettel was left waiting for tyres

Vettel came in for intermediate rubber again on lap 55 but his radio was not working properly and he was left waiting while the Red Bull crew searched for fresh tyres and sent him on his way.

Alonso risked staying out as long as he could in the hope the rain would ease, but had to bow to the inevitable, suffering a slow in-lap on the wet circuit and droppinv behind Massa. 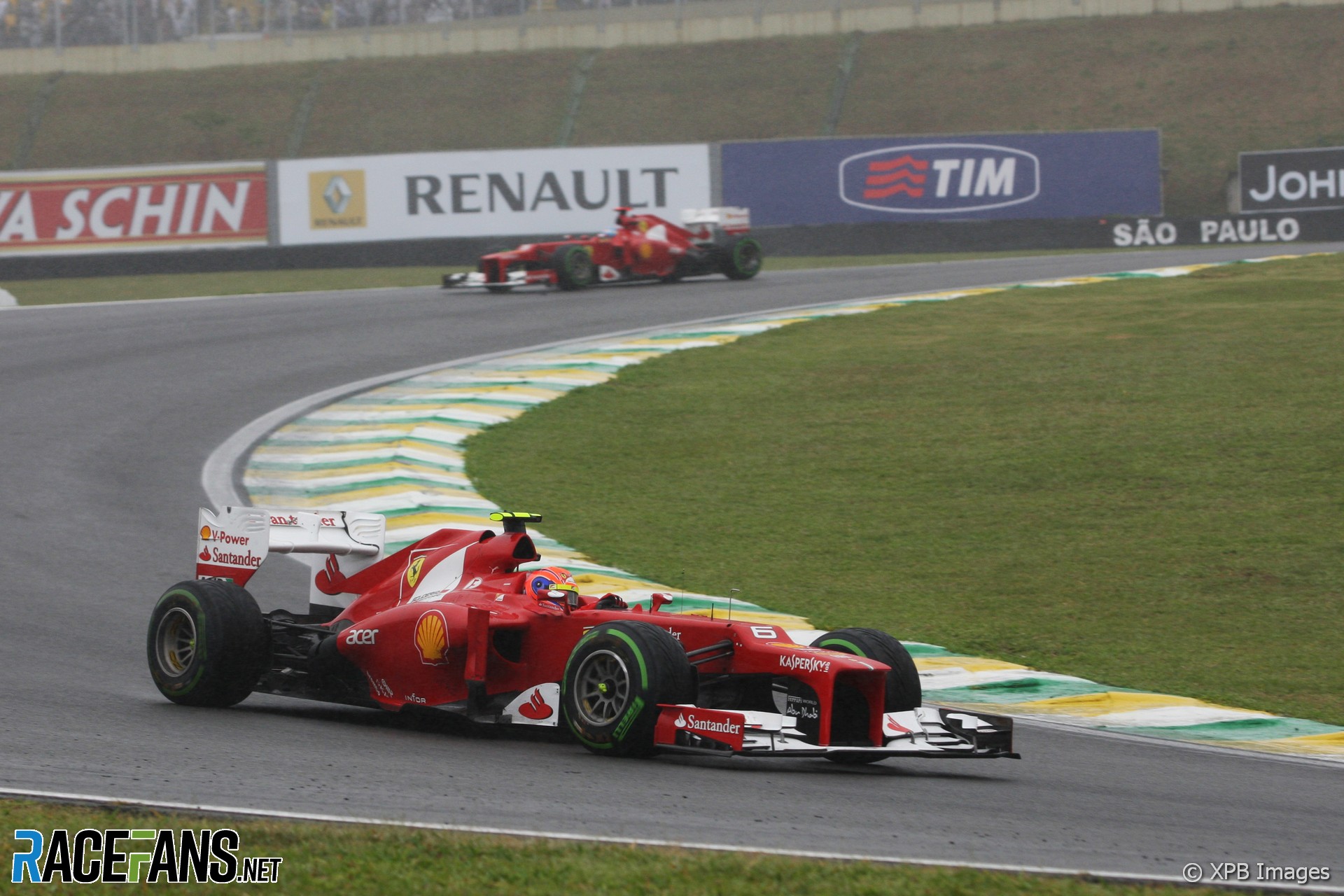 Massa slowed down to let Alonso back into second place

The track was now thoroughly soaked. Massa slowed down to allow team mate Alonso to make up his six-second deficit and reclaim second place. Those 18 points would move Alonso ahead of Vettel if the Red Bull driver failed to score, but he was running seventh, which became sixth when Schumacher, his childhood hero, let him by into sixth. 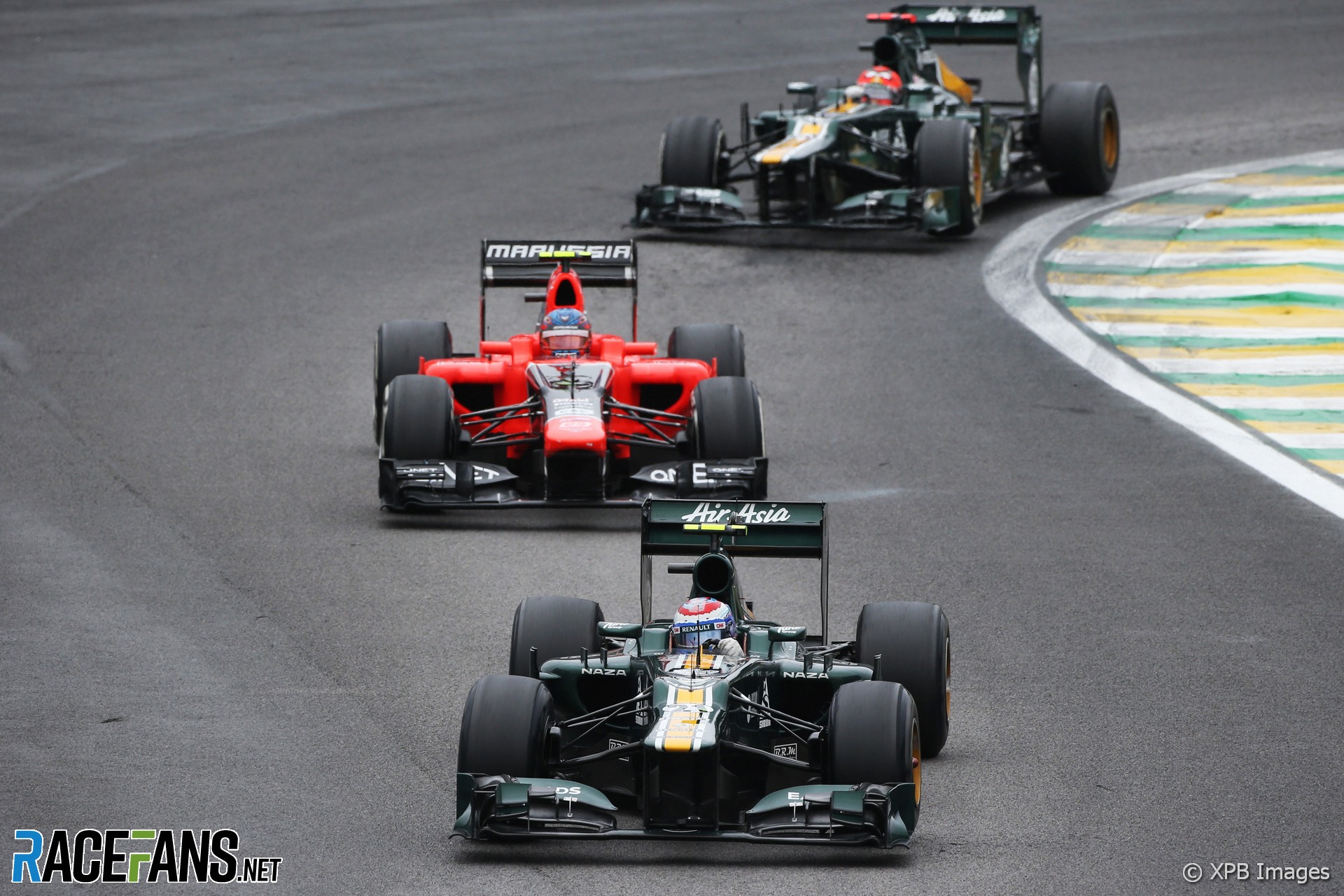 A championship fight worth millions swung with six laps to go

There was despair for Marussia when their driver Charles Pic was passed by Vitaly Petrov for 12th place with six lap to go. That ensured Caterham would beat them to 10th place in the championship, the last position which paid any prize money. 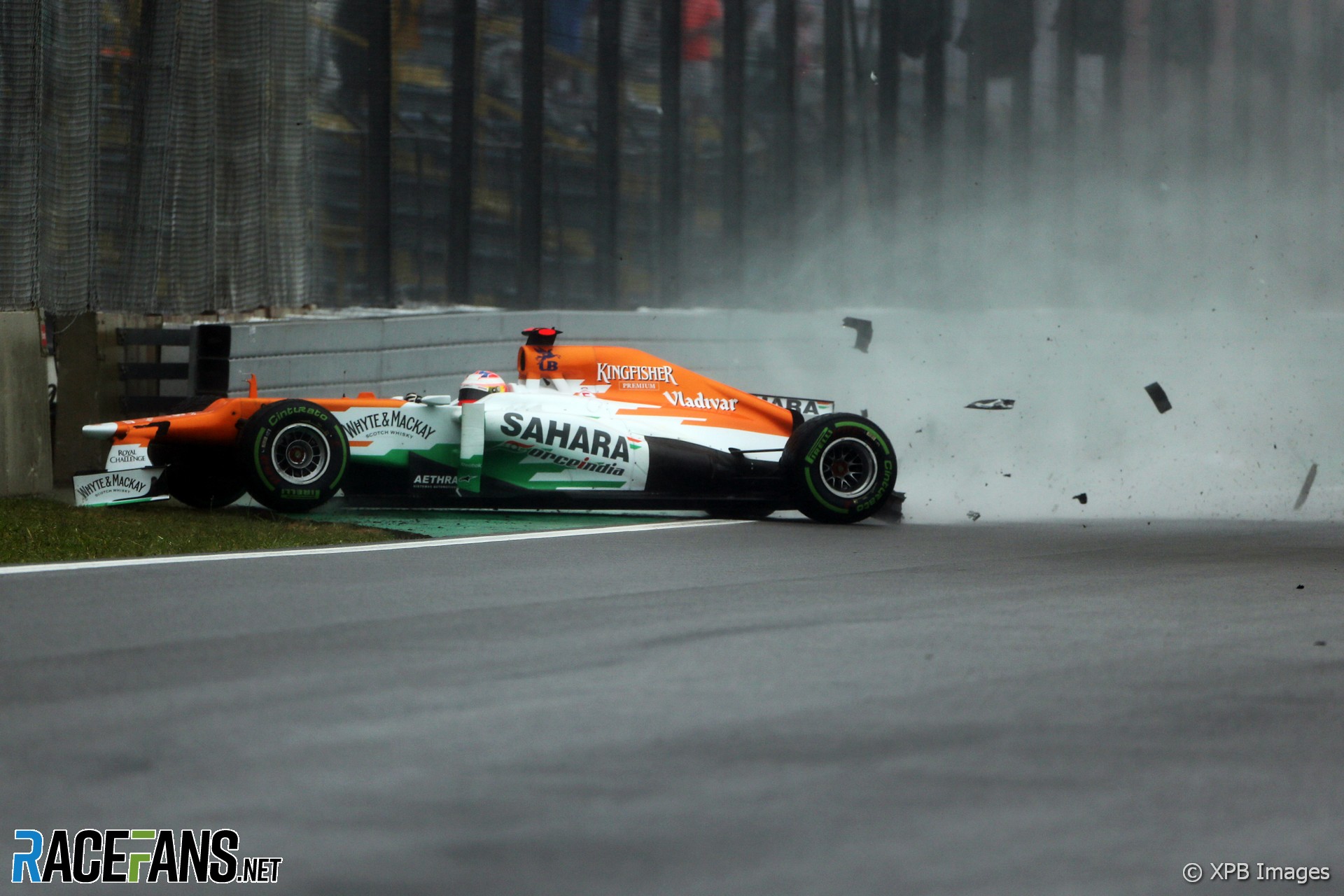 Di Resta’s crash brought the race to an early end

As the laps ticked down, Alonso’s dwindling hopes of taking the title rested on either Vettel or leader Button retiring. On the penultimate tour a driver did find the barrier – but it was Hulkenberg’s team mate Paul di Resta, who was unhurt in his high-speed crash. 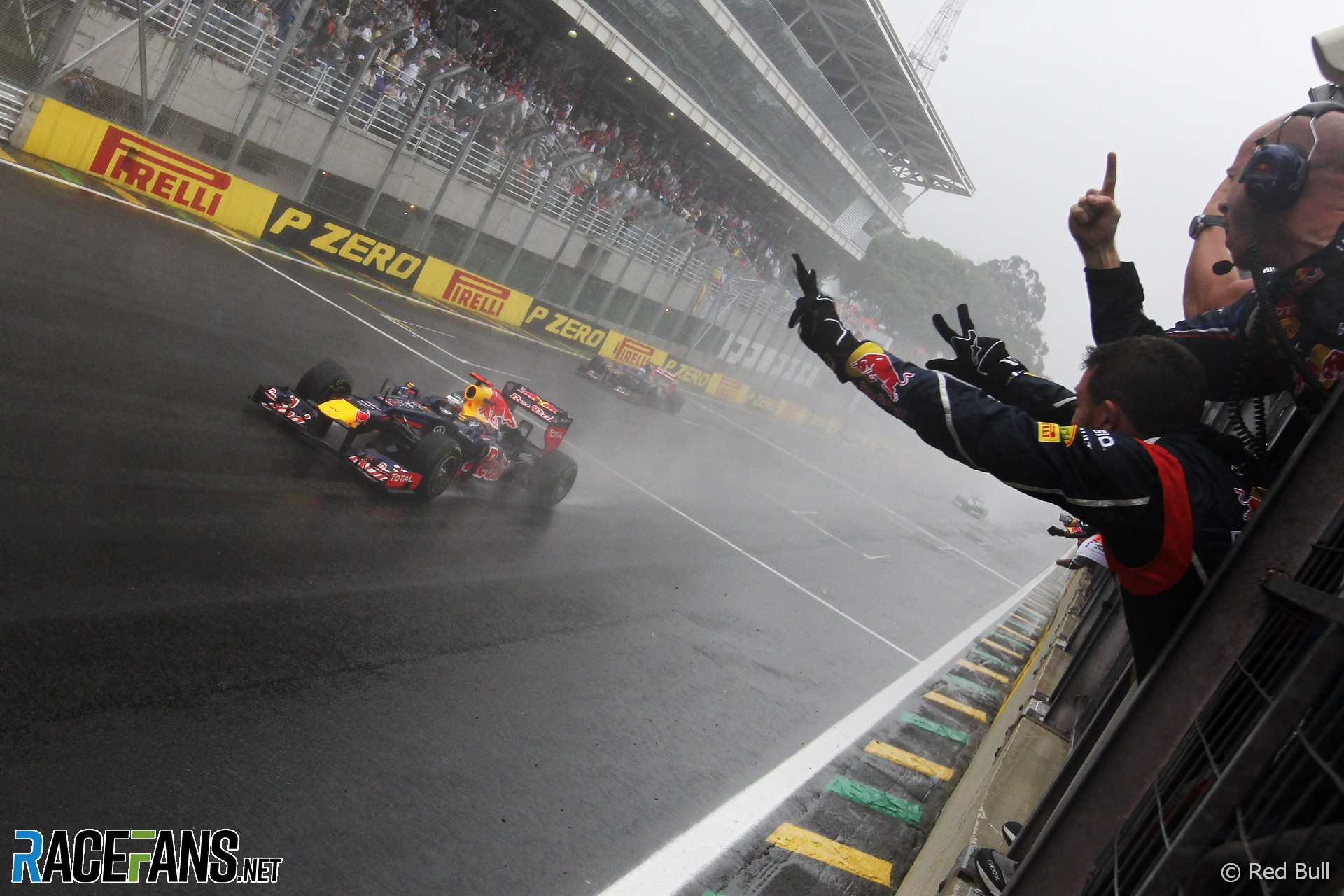 The Safety Car was deployed and remained out for the final lap. While Button claimed the win, sixth place for Vettel secured his third world championship title. After a race of lights-to-flag thrills, few seemed to care that it ended behind the Safety Car. 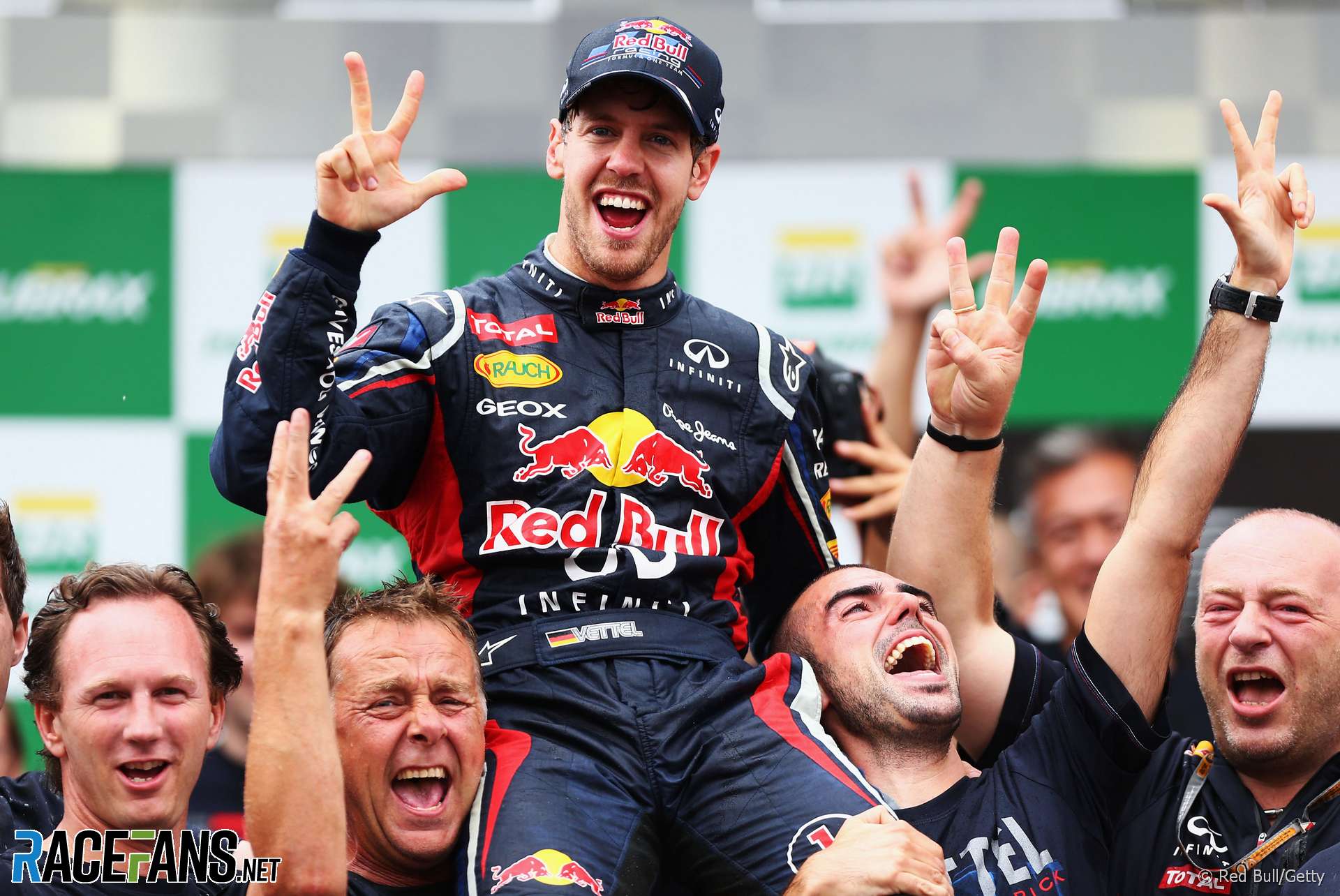 Read RaceFans’ original report on the race – and your comments on it – below, and check out our lists of the grands prix you rated as the best and worst of the last 15 years: