Dani B. Molina commented on the post, Will F1's TV and ticket sales boom continue into 2023?

The rising popularity of Formula 1 looked almost unstoppable last year and has affected every area of the sport.

The series signed multi-year TV agreements and announced a record-breaking 2023 F1 calendar. Lucrative expanded partnerships were announced with the likes of Amazon Web Services. It finally landed a new manufacturer as Audi announced it will step in when the next generation of power units arrive. Around the world, grand prix events were sold out.

F1’s owner Liberty Media continues to see its revenues increase across race promotion, media rights and sponsorship. Following rises in Q1 and Q2, Formula 1 reported its revenue for the third quarter of 2022 rose by 7% compared to the same period last year. 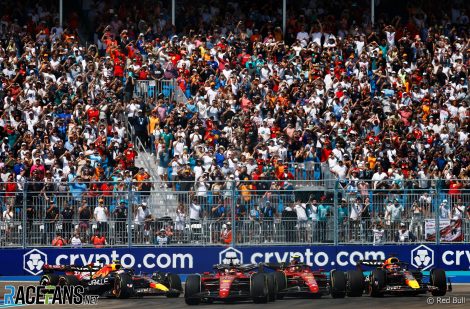 The Miami GP drew 23m viewers The championship was not always this healthy. Compare the current situation to a decade ago, when F1 was still run by Bernie Ecclestone, and the worldwide viewership fell significantly year-on-year. In 2013 the numbers published by Formula 1’s then-commercial rights owners CVC in its official Global Report were bleak. From 515 million viewers worldwide in 2012 the figure had slumped to 450 million.

Ecclestone said the dominance of Red Bull and Sebastian Vettel had turned audiences away, resulting in fewer people tuning in for the final few races of the season. That was certainly the case: Vettel won all of the final nine races that year as he romped to the title. But Max Verstappen’s similar dominance this year hasn’t stopped F1 booming.

It’s almost six years since Ecclestone was ousted and Liberty Media took control of the sport. Since then new audiences have been attracted through Netflix’s Drive to Survive, and younger audiences flocked to races, helped by the growing rivalry between Verstappen and Lewis Hamilton. The Covid-19 pandemic has been a factor throughout much of this, but F1 was one of the first sports to get up and running again after the first half of its 2020 season was cancelled.

While the pandemic inevitably depressed earnings, Liberty Media can be satisfied with the recovery since then. The series generated $715 million (£638m) of revenue across July, August and September. After the first seven races the total average audience per grand prix was 22.9m, a rise of 11%.

The new Miami Grand Prix – a marquee race Liberty toiled for years to get on the calendar – recorded a total audience across the weekend of 23m, up 27% against the 2021 United States GP. The Dutch Grand Prix race had a record 10.11m for the seven markets, a huge 44% rise compared to the year before. Even after Verstappen had been crowned champion, the Brazilian Grand Prix recorded an audience of 10.6m for eight major markets, up 42% from 2021.

“The attendance increase is just magnificent in terms of what Formula 1 is bringing mainly to new audiences,” Formula 1 CEO Stefano Domenicali told investors in November. “And that is true that the business model we are having with certain promoters is more related to the fact that there is a fee that they have to pay, there is the high-end Paddock Club that is on our side. 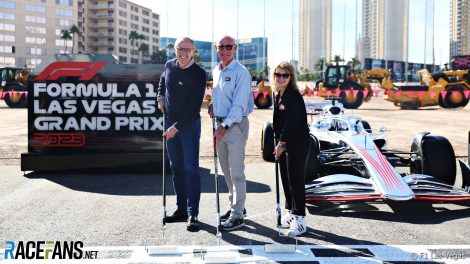 F1 has high hopes for the Las Vegas GP “The big opportunity to move forward is how we can maximise the revenue and monetise the revenue that we can take from the fact that Formula 1 has become more and more attractive. That’s really what we’re going to do in the future.

“We have a different way to do it, and I’m sure that we’re going to capitalise on this growth in the best way that we can in the next couple of years.”

Formula 1 has added a third US race this year as the Las Vegas Grand Prix joins the line-up. It serves to show the tremendous growth in the US, a market the sport has historically struggled to crack.

Are there any downsides to F1’s growth? As the calendar continues to expand with 23 rounds next season – six due to be Liberty’s much-vaunted sprint format – the demand on teams will rise, arguably having a greater impact on those towards the rear of the field.

“For a driver [the extra races] doesn’t matter,” Haas driver Kevin Magnussen explained. “For the team, for the mechanics, for the catering people, I think already now it’s too many.

“It’s different [for] some of the biggest teams they can shift around so some people go half a season, and another set of mechanics go half so they get a lot of races off. It’s very tough on small teams, they’re made of something special.”

The pressure placed upon venues by the rising attendances also became evident during 2022. The Circuit de Catalunya has promised F1 it will improve its arrangements for the Spanish Grand Prix after it struggled to cope with a sell-out crowd last May. Some 300,000 fans flocked to the venue across the weekend, but the experience was anything but fun for some. The circuit and its surrounding facilities seemed to burst at the seams with reports of traffic chaos and huge queues waiting for refreshments in the scorching heat. 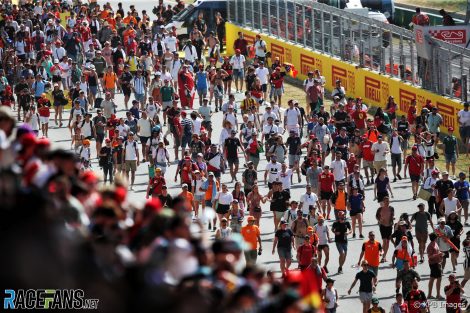 The Circuit de Catalunya struggled with the crowds It wasn’t the only event where visitors numbers caused logistical problems. Traffic congestion led to large queues at some of the more rural grands prix at venues like Spa-Francorchamps and Paul Ricard (though the latter will not return this year and the former does not yet have a deal for 2024). At Imola some attendees were stuck in car parks due to a deluge of rain. At other events hotel charges have risen steeply, which of course is not F1’s fault, but adds to the cost fans have to absorb.

Visitor numbers even became a problem in the paddock, notably in Austin and Mexico City, which prompted complaints from some drivers. Extra security guards were brought in at the Autodromo Hermanos Rodriguez to protect some drivers.

Fan involvement and enjoyment are at the core of any sport. Liberty’s recent boom proved they have the winning formula to become a global sensation, but they must be aware they don’t become victims of their own success.

The next steps will be some of the most important for F1 and their owners, to continue to grow their success, but not to the detriment of the fans. While Domenicali has stated he believes 24 races should be the maximum, the series is working on a strategy to hold 25, and there seems to be no shortage of willing hosts. In 2023 the temptation for Liberty to further build upon F1’s growing success will be stronger than ever, and it will take wise heads to ensure that does not happen at the expense of the sport’s appeal.