Boomerang commented on the post, Mercedes saw signs of W13's deep flaws in its first run at launch

The shortcomings with Mercedes’ W13 which led to their least competitive performance for a decade were detected during the car’s very first run, the team has revealed.

The W13 was launched at Silverstone on February 18th. Lewis Hamilton and George Russell drove the car for the first time that day.

The team’s head of trackside operations Andrew Shovlin confirmed that was when the team first realised the W13 was not performing the way they expected it would.

“To be honest the signs were there from the very, very early running, even on the filming day that we did at Silverstone,” said Shovlin in a video released by the team.

The depth of the team’s plight became clearer over a pair of three-day tests which followed at the Circuit de Catalunya and Bahrain International Circuit. 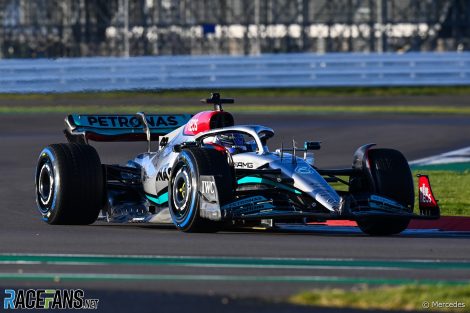 First run at Silverstone hinted at W13’s shortcomings “We then went for three days in Barcelona and the car was not that competitive,” Shovlin recalled. “But we were expecting a big update that we were going to bring to Bahrain. That was the point that we realised that we had a serious issue, at that Bahrain test.”

Mercedes introduced their aggressive ‘zero sidepod’ design in Bahrain. “We put the update kit on and it simply didn’t make the car go quicker,” said Shovlin. “Now, it’s been an interesting year from there on, but it has been a lot of work to do to try and get on top of those problems.”

The team began to make progress with the car when it returned to the Barcelona track for the Spanish Grand Prix in May. “That was the one where we made the biggest step in getting on top of the aero bouncing phenomenon and we were able to have pretty good performance” said Shovlin.

“But also it allowed us to see that once we’d solved that issue there was still other issues to solve with the ride of the car. It wasn’t very good over the bumps and it gave us the clarity to work on those next steps.

“Whilst it was only a small step in the right direction from a learning point of view it was a really important update.”

Having gone almost the whole season without winning a race, a further update introduced by the team at the Circuit of the Americas led to a breakthrough win for Russell two rounds later at Interlagos.

Shovlin is optimistic the team now understands all the problems it had with its 2022 design and will apply those to next year’s W14. “It’s fair to say that by the time you’ve got to the end of the season you’ve raced across a whole range of circuits, you should have pretty much understood all the issues and certainly by the end of the year.

“Whilst we still had some problems with the car that were making us less competitive at some tracks those were not new problems, those were problems that we could anticipate and that have been there for quite a while.

“Now, the big body of work that’s been going on for the last number of months has been to make sure that those issues on the 13 don’t get carried into the 14. We made good progress there and you can see that in some of the later updates particularly the update that we brought to Austin just put us that bit closer to the front.

“A lot of our focus was making sure we can develop an update kit, bring it to the track and actually see it translate to performance and hopefully the culmination of that work will mean that we can get an altogether more competitive package together for next year.”