In the round-up: Daniel Ricciardo says he didn’t have the speed to follow fellow back-ror started Carlos Sainz Jnr to the points places at Istanbul.

Ricciardo and Sainz shared the back row of the grid but while the Ferrari driver took points for eighth place, his rival admitted he didn’t have the pace in his car to keep up.

“We were side-by-side the first lap, I think I was ahead at one point, he was ahead, then we went back and forth and then he got me back,” explained Ricciardo.

“But then his ability to come through the field and keep going… it wasn’t really like his start was better and it put him in a better position it was just he was faster and he had more grip available. I just saw some of the moves he made, he drove very well so I’m not taking that away from him, but you could tell he was driving with confidence and the grip was was giving him a lot.

“We just didn’t have that. Even if I made five places on the start and he stayed wherever he was, he was still going to at some point come through, he was just a lot quicker.”

Poor front-end grip was the limiting factor throughout Ricciardo’s race, which he finished in 13th. “As soon as I got behind someone, I lost the front and then it started to get dead,” he said.

“So I pitted, thought we’d be quick with clear air on a new tyre, weren’t really that quick. We went through a phase where it was mediocre, then it’s like it cleared. And I remember four good laps where I felt like I could really lean on the tyre and I started to smile under the helmet and then it fell away again.

“The last 10 laps was just very difficult, just the rear. I had a look at the end, you could see the canvas, it’s down to the core.” 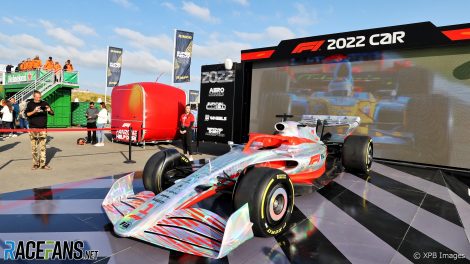 Analysis: F1 has its closest competition for years but will new rules ruin it in 2022?

Formula 1 may be enjoying its closest championship fight for years, but the sport’s motorsport director Ross Brawn remains convinced the sweeping technical rules changes coming for next season are necessary.

Speaking after the championship lead change hands again between Max Verstappen and Lewis Hamilton in Sunday’s Turkish Grand Prix, Brawn said: “This weekend I heard some comments around whether the 2022 regulation changes are needed given we’re currently enjoying such a golden season this year.

“I think that fails to understand the fact that while the championship is thrilling this year the cars still struggle to follow each other closely and create overtaking opportunities.

“While the 2022 rules won’t change the situation overnight I think they are a much better platform to improve the racing on the track and I’m sure that once the new rules have settled down, we will see some incredible races and championships in the future, with even more wheel-to-wheel action.”

Red Bull will replace the Honda logos on its rear wing and drivers’ overalls with Acura branding for the United States Grand Prix, RaceFans understands. Acura is Honda’s premium brand for the North American market. The engine cover on the RB16Bs is expected to retain the Honda E Technology signage introduced earlier this year.