In the round-up: Mercedes has presented a new electric vehicle concept which its Formula 1 team contributed towards.

Mercedes says it drew on the expertise of its F1 team to produce its latest roadgoing electric vehicle design with a claimed range of over 1,000 kilometres on a single charge.

Its Grand Prix and High Performance Powertrains divisions were consulted on the creation of the Vision EQXX, a four-seater concept car, which claims to draw less than 10 kWh per 100 kilometres. According to Mercedes its battery pack has 50% less volume and is 30% lighter than the equivalent in the EQS, which it launched last year.

“Vision EQXX has seen the best minds from our RD centres work together with engineers from our Formula 1 and Formula E programmes,” said Daimler management board member Markus Schäfer. “They are proving that innovations from motorsport – where powertrains are already highly electrified – have immediate relevance for road car development.” 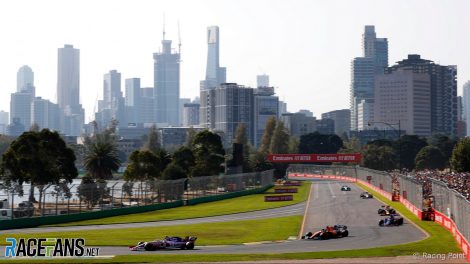 F1 is due to return to Australia in April

The Covid-19 pandemic could force more changes to the world championship schedule for the third year in a row, F1 CEO Stefano Domenicali has admitted.

A record-breaking 23 races are scheduled on the 2022 F1 calendar. These include venues which were unable to hold races in the previous two years, such as Albert Park in Australia, Marina Bay in Singapore and Suzuka in Japan. The Chinese Grand Prix is absent from the schedule for the third year in a row.

F1 will add a new race in Miami this year and Domenicali is keen to expand the calendar further, but admits the series’ plans for expansion may be frustrated by the pandemic.

“A comeback in Africa – whether in the north or south – would be great,” he told Sport 1. “How quickly this works will also depend on the situation around Covid. We must not continue to underestimate the corona pandemic. We could also have to adjust the calendar again in 2022.”

I am extremely proud to announce an important development at RaceFans for 2022. Will Wood, who became a contributor to the site back when it was still called F1 Fanatic, has been appointed as assistant editor.

His arrival is especially significant as Will is the first full-time member of staff to join the team in addition to myself. He is already hard at work expanding our coverage into new areas and ensuring that we head into the new motor racing season in better shape than ever before.

While many of our other regular RaceFans contributors will continue with us into the new year, Dieter Rencken has moved onto another project, and his final articles for us will appear in the coming weeks. We wish him all the best.