Speaking to RaceFans as he prepares to conclude his final term as president, Todt gave his views on Verstappen and his championship contender Lewis Hamilton.

“Max is a bit like Kimi,” said Todt of the driver who can clinch the championship at the next race. “Very straightforward, very talented and they have limited interest and they focus on it. Indifferent.”

Verstappen could end Hamilton’s four-year run of consecutive championships. The Mercedes driver has become an increasingly outspoken supporter of diversity and human rights, which has brought him into conflict with the FIA at times. Last year the sport revised its rules on podium ceremonies after Hamilton wore a T-shirt bearing the slogan “arrest the cops that killed Breonna Taylor” at the Tuscan Grand Prix. 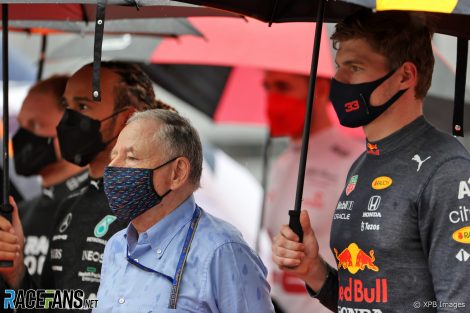 “I like Lewis,” said Todt. “Of course I do admire his longevity, of course you know it is true it’s easier when you driving for the best car, best team in the long term.

“But he has the passion. I think the fact the he is engaged is very good. It doesn’t mean that I always agree with the way he is engaging. But he has his beliefs, he expresses his belief, so I do like that, I do respect that.

“Sometimes I feel it could be done in a different way but the fact that he wants to be engaged, he wants to be a player in matters where he feels it does matter, I do respect that.”

Todt believes the fight between Verstappen and Lewis Hamilton for this year’s world championship is a result of the largely stable technical rules the sport has had for several years.

“It was not unexpected,” he said. “Clearly the more stability of the rules you have, the less margin of revolution you have, then clearly we could see that the engine suppliers were progressing year after year and then you know that both teams have very talented people to build the chassis.

“We knew that each team had one exceptional driver – it doesn’t mean that the other one is not good, clearly to be in Formula 1 anyway you need to be a good driver, particularly the way to have access to superlicence and all that. But we know also that you have a limited amount of drivers who give the kind of extra talent, extra blessing and if it’s combined with a car we see what we see.”

Having overseen Ferrari’s dominance of the early 2000s, which included taking Michael Schumacher to his seventh drivers’ title – a record Hamilton now shares – Todt isn’t concerned about the F1 records he set being broken.

“It’s good for them,” he said. “At the moment we still have two champions with seven championships. So in a way, a record is always potentially able to be beaten.