Ferrari’s decision not to bring Sebastian Vettel back for 2021, and replace him with Carlos Sainz Jnr, was a bold statement that the team would invest in the promise of youth over experience.

After easily overshadowing his champion team mate in 2020, Charles Leclerc would be expected to lead Ferrari as new team mate Sainz got to grips with his new surroundings in Maranello. But the Spaniard enjoyed the lion’s share of the on-track success throughout the season to end the year ahead on points and take the coveted ‘best of the rest’ position of fifth.

The start of the year was a challenging one for most drivers who had found new homes in 2021 and it was no different for Sainz, who struggled to match Leclerc in qualifying over the opening phase of the season, save for Portugal. After four rounds, Sainz had managed only half the points (20) that his team mate had managed in the same time (40).

Leclerc’s highlight of the season came in Monaco, where he secured a very popular home pole position – albeit through the help of a red flag that he himself caused by crashing at the exit of the Swimming Pool. But Leclerc and Ferrari’s best chance of a win all year was ended before the race even began when gearbox problems caused by his Saturday shunt reared their head on the reconnaissance lap.

But his team mate’s Monte Carlo heartache was Sainz’s opportunity and he took advantage of Valtteri Bottas‘ calamitous pit stop to move up to second and secure his first podium appearance in Rosso Corsa-coloured overalls.

Despite his Monaco disappointment, Leclerc followed up with his second consecutive pole in similarly fortunate circumstances in Azerbaijan and led almost the entirety of the British Grand Prix until he was caught and passed by Lewis Hamilton in the closing laps. But by now, Sainz was hitting his stride and reached the chequered flag ahead of Leclerc for the first times in France and the two Red Bull Ring races. 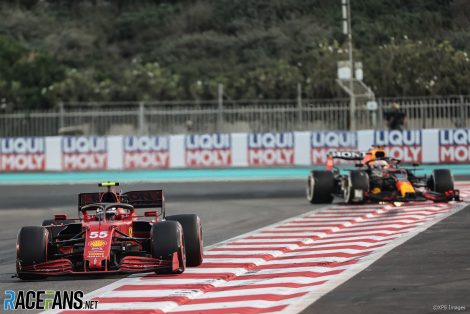 Podium at finale lifted Sainz to fifth in standings

Leclerc found his form around the summer break and began consistently finishing ahead of Sainz through the second half of the season. However, Sainz would be the one who scored the biggest results of the two, taking three more podiums in Hungary, Russia and in Abu Dhabi in contentious circumstances.

This trio of 15-point hauls helped Sainz move ahead of both Leclerc and former team mate Lando Norris in the championship at the end of the season, as Ferrari began to pull away from McLaren in the constructors’ standings.

At year’s end, Leclerc had beaten Sainz in the qualifying battle and in classified finishes throughout the season, but Sainz had come out on top in the standings. It had been a far more fruitful season for the Scuderia, with both drivers having given team principal Mattia Binotto enough reason to declare them the strongest driver pairing on the grid.

With both having shown they were not afraid to duke it out with the other in Saudi Arabia – much to Sainz’s chagrin – it will be fascinating to see which Ferrari driver comes out on top when the team may well be back in the thick of the action in 2022.

Charles Leclerc vs Carlos Sainz Jnr: Who finished ahead at each round

Times based on the last qualifying round at each race weekend in which both drivers set a time. Negative indicates Charles Leclerc was faster, positive means Carlos Sainz Jnr was faster