Honda’s fourth and possibly final spell as a Formula 1 manufacturer ended on a high – one which looked distinctly unlikely when it struggled on its return to the sport in 2015.

Honda was the last manufacturer to take a chance on developing an F1 power unit to the current V6 hybrid turbo regulations. It is also the first of those to leave, citing the need to refocus its research and development efforts on electrifying its road car range.

It heads for the exit having become the only manufacturer besides Mercedes to power a driver to the world championship in F1’s hybrid era. Renault – Honda’s predecessor as Red Bull’s supplier – has so far conspicuously failed to live up to its title-winning achievements in the V8 era, as is also true of Ferrari.

When Honda announced it was entering F1 for a fourth time, reuniting with McLaren for the 2015 season, there were great hopes. A legendary partnership was reunited and benefitted from two world champion drivers as Jenson Button was joined by Fernando Alonso, the latter making a surprise comeback to the team he had a bitter split from in 2007.

The crushing success Lewis Hamilton and Mercedes enjoyed as they romped to the 2014 titles might have put some sense of foreboding on that. But almost no one predicted quite how disastrously Honda and McLaren’s reunion would go.

Testing seemed cursed. Alonso crashed heavily in circumstances that initially looked mysterious, which he eventually explained as a steering issue. As a consequence, Kevin Magnussen stood in for him at the first round of the 2015 season.

McLaren managed just 380 laps over 12 days of pre-season testing, while reigning champions Mercedes put in 1,340. It was a bad start and from there things barely improved. 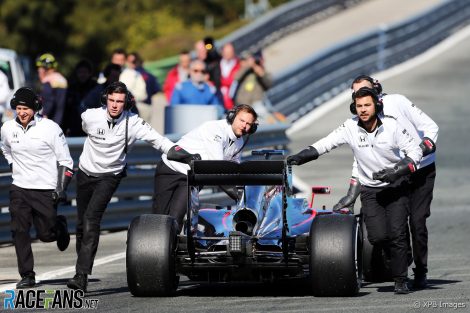 Early testing was fraught with problems

Reliability on the Honda unit proved horrible. McLaren slumped to ninth in the constructors championship with 27 points at the end of the season. The driver described some races as a “scary” experience.

Alonso, in particular, was scathing in radio remarks during Honda’s home race at Suzuka about his “GP2 engine,” and later criticised F1 bosses for airing his comment during the race. It would haunt the rest of McLaren-Honda’s time together.

Any hope that things would radically improve into 2016 faded quickly, although it was a better year overall for the partnership. They scored 76 points and rose to sixth in the championship, despite an increasingly checked-out Button heading for retirement and another spectacular accident for Alonso forcing him to cede his car to Stoffel Vandoorne for the Bahrain round.

But it was telling that in 2017 Alonso again failed to complete a full F1 season in his Honda-powered car, though this time it was because he chose to race somewhere else. He skipped Monaco (Button returned from retirement as a one-off substitute) to race at the Indianapolis 500 which he led convincingly, then dropped out with – what else? – a Honda engine failure. 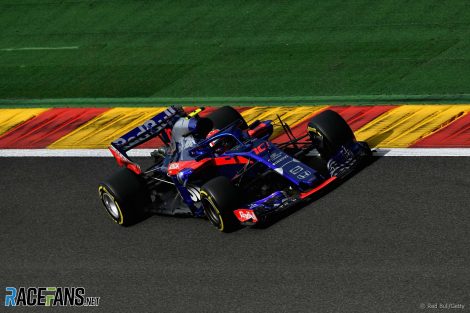 Gasly had useful links to Honda from his time in Japan

By 2017 the situation between McLaren and Honda looked impossible to salvage. Another extensive overhaul of the power unit design had reversed their meagre 2016 gains relative to the competition, and the team sunk back to ninth. They announced their divorce before the end of the season.

Earlier in the year Honda had announced a second team – Sauber – would use their engines in 2018. But within three months Frederic Vasseur replaced Monisha Kaltenborn as the team’s principal, and swiftly killed the deal.

Shortly after the announcement of McLaren’s termination came the news Toro Rosso would take up the chance to run the Japanese motors. Red Bull Junior Team driver Pierre Gasly, who nearly won the Japanese Super Formula title, was swapped in to replace Carlos Sainz Jnr, who was then shuffled over to placate Renault losing the power unit contract with the Faenza squad.

At the time, Toro Rosso had been on a run of fairly poor luck with its power unit supply. Having resorted to the 2015 Ferrari power unit in 2016, then been added back to Red Bull’s main Renault deal in 2017, the junior outfit was in no position to do more than take what it got. However in its fourth year Honda’s engine programme finally started to bear fruit. 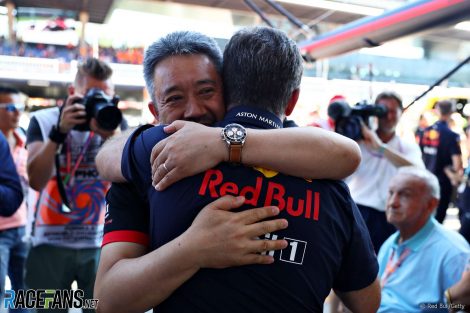 This may not have seemed the case on the surface: McLaren-Renault out-scored Toro Rosso-Honda by 62 points to 33 in 2018. But Red Bull saw what their junior squad could achieve with an engine tailored to their car instead of a customer Renault, and made the bold call to join them in using a power unit which hadn’t yielded a single podium in four years.

Red Bull and Toro Rosso duly extended their deals to use Honda power units, but only by a single season. The reason emerged the following year.

In 2020 Honda became the first hybrid era manufacturer to power two separate teams to wins with Pierre Gasly’s Monza victory, as well as two more with Red Bull. But it wasn’t enough for the top bosses at Honda to justify the expense of an F1 project. In October Honda announced it would leave at the end of 2021.

It promised at the time to put a full focus on its final season. It delivered on that claim, to the extent that Verstappen and Red Bull remained contenders in both championship fights until the final round. 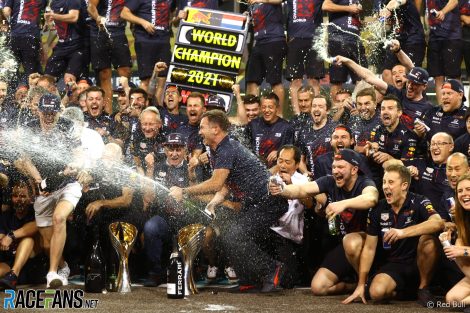 Verstappen snatched the title on the final lap in Abu Dhabi

Significant performance gains had been found thanks in part to Honda’s jet engine division. Their reliability was also much improved: In Honda’s final year Red Bull and AlphaTauri only took penalties for crash damage, rather than technical failures while rival, Mercedes-powered cars struggled with performance degradation on their internal combustion engines. Verstappen and team mate Sergio Perez took 11 victories and a further 12 podiums, with one more top-three finish for Gasly.

And, in extraordinary circumstances, a title which was out of their grasp for almost every lap of the race finally fell to Verstappen, Red Bull and Honda on the last lap.

After the pain of their first years back in the sport, and the pressure of knowing they had one last chance to win a title before leaving, Honda’s first championship triumph for 30 years was an emotional moment.

“All the emotion came out from everyone,” said Verstappen. “It’s a real story of ‘never give up’ and ‘keep pushing’ because it was, of course, a very difficult situation for them back in the day.”

Red Bull gave Honda the self-belief they needed to make a success of their F1 project, said Verstappen. “Everyone in the team told them we can do this together. You just have to believe and that’s what they did.

“Luckily, of course, there was a lot of investment involved, but that’s normal in Formula 1, you need to do that. And to of course then win the championship all together, also in their final race of being fully part of the team, was insane.

“Everything came out in the emotions.”