Formula 1 drivers heaped praise on seven-times motorbike world champion Valentino Rossi ahead of his final race in the series this weekend.

Fellow seven-times champion Lewis Hamilton said the Moto GP rider is arguably the best rider the sport has ever seen.

“It’s obviously sad to see Vale stopping, but I think his drive, his approach, everything he’s done has been incredible,” said Hamilton. “The passion that he’s had, for so long, has shown through and [he’s] just such a legend. One of the greatest to ever do it, if not the greatest to have ever done it.

“So it will just be sad to not be watching the races and seeing him just ride in style as he usually does. But I think it’s a beautiful time for him, also, because he’s got family now, [that] he’s growing or starting to build.”

Hamilton shared the Ricardo Tormo circuit with Rossi for a day in 2019 where they exchanged machinery: Hamilton sampled Rossi’s Yamaha M1 Moto GP bike and Rossi drove the 2017 Mercedes W08 F1 car. “I’m grateful I’ve had the privilege to share a really special day with him on track,” Hamilton added. “I’ll always remember that.”

Lando Norris, was born just three years before Rossi’s Moto GP debut, is a lifelong fan and his helmet design was originally based on Rossi’s. “It’s sad times,” said Norris, “I’m going to get a miss him, I still try and watch as many Moto GP races as I can. 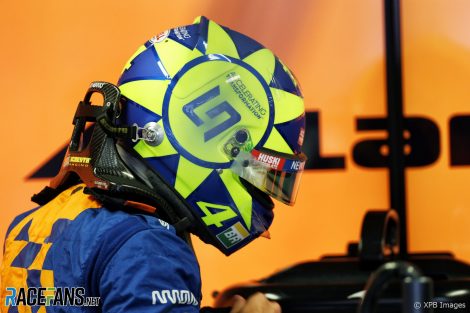 Norris wore a Rossi tribute helmet at Monza in 2019

“He was the guy I watched when I was four, five, six years old, got me into racing, got me onto a motorbike first,” said Norris, who first wanted to be a motorbike racer before discovering karting. “He’s been the guy that I’ve looked up to, the guy who’s kind of helped me get to this position where I am, because probably without watching him, my ambition of being a racing driver wouldn’t have been so high.”

Norris said he had been “lucky” to have met Rossi at the 2019 British Moto GP round. “I’m going to miss him in Moto GP, I don’t think it’s just me. I think there’s millions of fans that support him that are also I was going to miss him being in the paddock.

“And his character, because I think that’s one of the best things about him is the guy he is, the character he is amongst people, amongst fans, he has time for everyone. I think he’s a special guy and he’s definitely going to be missed.” 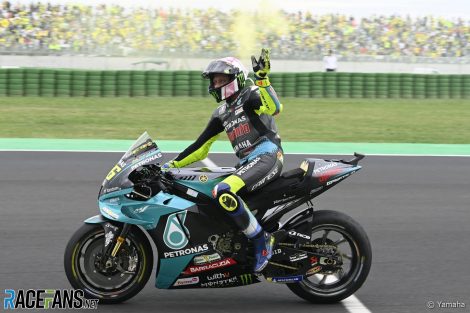 Rossi will bid farewell after seven titles and 115 wins

Rossi also tested Ferrari Formula 1 cars on several occasions and the team hoped to run him in an F1 race at one stage.

Ferrari driver Carlos Sainz Jnr, described him as “a living legend of motorsports in general and Moto GP – everyone who follows Moto GP probably partly followed it thanks to Valentino Rossi.

“He has a bit of history with Ferrari, [testing] and making it close to racing in Formula 1. I heard that now he really likes rallying so I guess we’ll see him doing some rallies and maybe I can meet him in a rally car, I wouldn’t mind.”