Formula 1 should ask fans whether they want it to carry on with the sprint qualifying format which was introduced this year, say team bosses.

The extra Saturday races were held for the first time at the British and Italian grands prix this year. While F1 has described the format as a success, the verdict from fans and drivers has been mixed.

The third and final sprint qualifying round this year will be held at the Brazilian Grand Prix. Aston Martin team principal Otmar Szafnauer said F1 should canvas fans’ opinions on the format before deciding on whether to continue with it.

“We’ve got another one coming up in Brazil and thereafter we will have seen three different tracks and [can] make a decision on the future whether the benefit on a Friday outweighs some of the traditions that we usually have on Saturday,” he said.

“I think it’s only fair that we also listen to the fans. Perhaps do a bit of a fan survey to understand if the fans, both at the circuit and at home, watching TV, which they prefer.

“I think we should listen to the fans and if it’s more popular with them, then we should do more of the them.”

The second running of the sprint format at Monza prompted more negative responses after the race proved largely processional.

“Silverstone to me was a bit better, but that’s the first time we we did that,” said Szafnauer. “I think on Saturday there isn’t as much overtaking as we would hope. People just settle in and that’s what you end up with.

“So let’s see what happens in Brazil and then have a backwards look at everything and see if we’re going to do it in the future.”

“Of course we expected maybe a little bit more overtaking manoeuvres. But we must be careful for next year we have new regulations and maybe this will change completely. 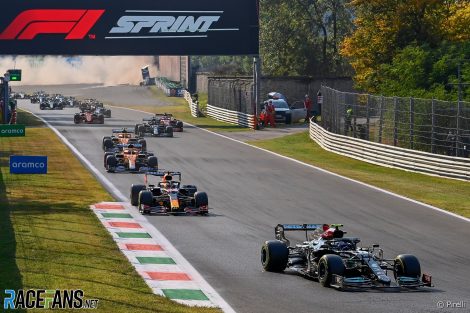 Feature: F1 has only worked out one thing about sprint qualifying: It wants more

“I think that this format is positive and I would expect that maybe next year some races will be added to this format. The only negative I see is for rookies because they have only one free practice session and then they go right into the qualifying. This is not an easy one.

“But nevertheless, as Otmar said, we have to wait now after Sao Paolo. This is the third race weekend where we have this format, then ask also the fans how they see it and then sit together and decide what we do in 2022.”

F1 CEO Stefano Domenicali this week the format had been an “incredible success” and he wants around a third of races next year to include it. Ferrari’s sporting director Laurent Mekies suspects the format may be altered but not dropped for the 2022 F1 season.

“As you see today, as you have seen many times, the initial feedback is very good from everybody,” said Mekies. “We already had many loops of discussions with the FIA, with Formula 1 in the various groups. We interact with them and gave feedback. So I think it’s it’s to be expected that Stefano is planning more.

“What we say to each other, however, that we would wait for the third one to look if we want to adjust the format to maybe modify some of the parts based on what the fans’ feedback will be and what we all think.

“But I think in broad terms we already all agree that this is a positive step for the sport and therefore we would probably all expect already to have a few more of them next year.”