In the round-up: Carlos Sainz Jnr said he was frustrated by the first-corner incident at the Mexico City Grand Prix, which he says cost him places at the start.

Sainz “frustrated” by turn one incident

Sainz arrived at the first corner ahead of Charles Leclerc, but fell behind his team mate as they reacted to the collision between Daniel Ricciardo and Valtteri Bottas.

“From my side, going into turn one, I’m right behind Daniel and Pierre [Gasly], Daniel crashes into Bottas, I’m on the inside of turn one, so I have no possibility to cut turn two like Charles and Gasly and Perez do,” Sainz explained.

“So I am committed to having to do the whole track in turn two. And then actually Daniel without front wing doesn’t even turn into turn two, so I need to turn cut three.”

As well as falling behind his team mate, Sainz was also passed by Antonio Giovinazzi. “In hindsight, honestly, I’m a bit frustrated with the situation because I feel like I’ve been a victim of a whole mess that I had nothing to do with and it made me lose a couple of positions that I shouldn’t have lost,” said Sainz.

“But like always turn one you sometimes are lucky, sometimes are unlucky, and I lost positions that, to be honest, I shouldn’t have lost and put me on the back foot for the race. But we managed to recover with good pace and I’ll try to take that on the positive side.” 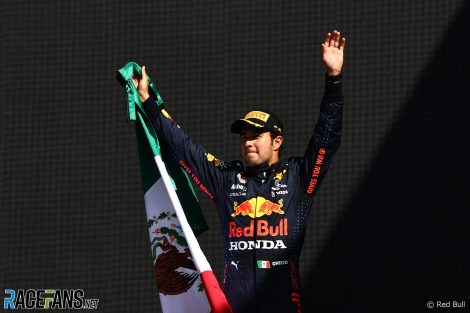 “One of those days that I must enjoy” – Perez

Sergio Perez said being the first Mexican driver to finish on the podium at his home race, after taking third place on Sunday, was an “extremely special” moment.

“Obviously I wanted more, I wanted to win the race and obviously to finish one-two for the team would have been amazing,” he said. “But at the end of the day, we are such competitive persons that if we finish third, we really, really don’t enjoy it.

“But today is one of those days that I must enjoy because the crowd and seeing so many people so happy, and especially on the podium, everyone who has been with me since day one was on the podium, so that was extremely special for me.” 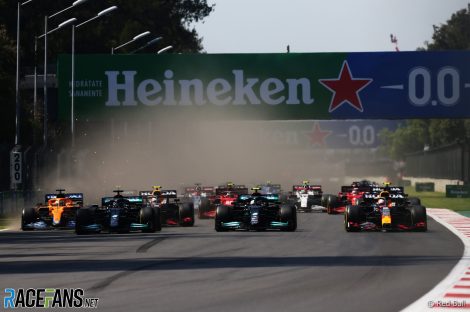 While describing Red Bull’s performance advantage in the race, Hamilton said: “It just shows how fast their car is when Sergio’s that close behind me and able to follow that closely.” Hamilton said on Monday wanted to “make sure people don’t read what I was saying wrong yesterday.”

“I have a lot of respect for [Checo] and think he’s doing a great job in his new team. He’s improved so much this season and I know how hard it is to progress with a new team, it takes time.

“My comment was simply that following another car in Mexico is the hardest thing due to the low drag we all have. That’s why there is very little overtaking. However, he was able to follow so closely which highlights just how much more downforce they were able to carry. Big up Checo for keeping it clean.”

In a later post Hamilton also referred to his criticism of Valtteri Bottas’ driving at the start of the race, having said his team mate “left the door open for Max” at the start.

“We all have bad days,” Hamilton wrote. “We live and we learn. Yesterday I said that [Valtteri Bottas] left the door open and naturally people will jump to criticise.

“We are a team and we win and we lose as a team. There is not one single person responsible for winning or losing, we do it together good or bad. You may be able to beat us but you can’t break us!”

"Racing driver Archie Hamilton, with 207,000 followers, features in an esports-themed YouTube series, in association with British racing team McLaren. This new breed of nicotine influencer – one might call them nicotinfluencers – are soldiers at the UK front of a marketing war that London-based British American Tobacco has long been waging on foreign soil."

"The FIA and Formula 1 can today confirm that at the 2021 FIA Formula 1 Mexico City Grand Prix, between Monday 1st and Sunday 7th November 7,100 tests for Covid-19 were performed on drivers, teams and personnel. Of these, nine people tested positive."