George Russell welcomed the FIA’s move to replace the kerbs used at some corners in recent races, citing crashes in junior series which left drivers with injuries.

The sausage kerbs at the exit of turn one at the Circuit of the Americas were replaced during the United States Grand Prix weekend after incidents at the corner. W Series driver Fabienne Wohlwend was launched into the air when she hit one of the kerbs during a race on the morning of the grand prix.

Rival Abbie Eaton was unable to take part in the race after suffering a compression fracture of her T4 vertebrae. Eaton said she suffered the injury after hitting a sausage kerb.

“[I] ran wide and went over one of the huge sausage kerbs that launched me into the air giving me a compression fracture at T4 vertebrae,” she wrote on social media. Not ideal.

“Also found out one of the F4 drivers also did the same and has the exact same injury. Ridiculous! No need for them at all.” 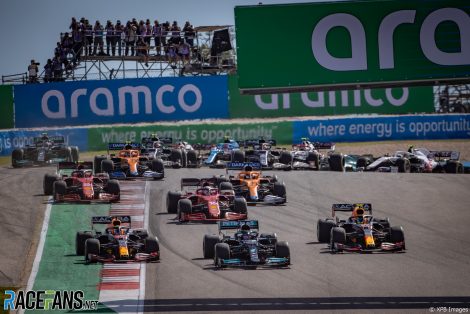 Drivers ran wide at turn one after ‘sausage kerbs’ were removed

Russell, a director of the Grand Prix Drivers Association, said the kerbs should not be used if they present a risk to drivers. “The kerbs are put there to try and limit the track limits but if it comes at the expense of injuries and potential life-changing injuries, then that’s unacceptable,” he said. “So there needs to be a better solution and not even a better compromise, just a solution that is not dangerous. But it is never easy.”

He backed the decision to change the kerbs at the Austin circuit and pointed out a kerb contributed to another crash during a Formula Regional Europe race at Monza the following weekend involving Dino Beganovic and David Vidales.

“Globally this is something F1 and the FIA really need to look into because we saw another pretty dangerous incident in the Formula Regional in Monza,” said Russell. “And so this is something the GPDA are really pushing hard to make improvements because I don’t know what the exact injuries were of these drivers, but I believe somebody fractured their back and this is unacceptable from such a simple off.”

Further kerbs were removed from the Autodromo Hermanos Rodriguez during the Mexico City Grand Prix weekend between turns one and three, and at turn eight. Speaking at the circuit, FIA F1 race director Michael Masi pointed out the design of the kerbs varies from track to track, and the suitability of each is determined according to the circumstances.

“Having had a look at here at turn one-two on one basis and having a look at that scenario, it was determined case-by-case,” he said. “So the rest of the year we’ll look at them case-by-case where they are.

“The one at turn eight was a very simple one because of the speed of the corner and so forth. Having a look at the configuration of turn one-two and the way its grass everything else, it was determined to remove them and that’s what happened on Thursday.”

“You need to consider everything on a case-by-case basis, as we’ve always said,” Masi explained. “They’re all very different styles.

“What we’ve got in Austin versus what we had here are two completely different beasts. So you just need to look at them on a case-by-case, where they are, how it works and look at the whole scenario.”