Formula 1 will introduce a new, fourth version of its Halo safety device next year designed to withstand even more serious crashes.

The latest iteration of the design will draw on lessons learned from the most serious crashes seen in F1 and other series which use the device. This includes one of the most astonishing escapes of recent years, Romain Grosjean’s fireball shunt in last year’s Bahrain Grand Prix.

The Haas driver suffered a head-on, 67G impact with a barrier which sheared his car in two and caused a huge fire. Grosjean survived but suffered burns to his hands which prevented him from competing in the final two rounds of the championship.

The FIA’s report on Grosjean’s crash found his Halo and other safety equipment performed as designed. It also identified 22 areas of improvement to all aspects of driver safety.

The Halo was introduced in 2018 following development and testing at the Cranfield Impact Centre at Cranfield University. Clive Temple, Motorsport MSc programme director and senior lecturer at the university, told RaceFans coming revisions to the design for next year will not only make it stronger but also improve its integration with F1 cars, which will be designed to a drastically different set of technical regulations. 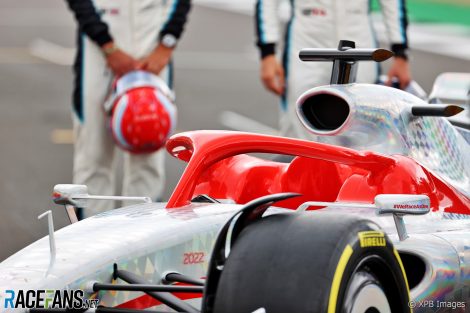 “What we’re looking at is a much stronger device and a device that is going to be integrated into the 2022 car with all the changes that the car will have in relation to what we’re currently seeing in F1,” said Temple.

“That’s because these safety devices are integral to the vehicle itself. You’ve got to make sure that takes place in a way that, particularly where the fixings are concerned, there’s no issue regarding potential shearing, et cetera. So that is a very critical part of the Halo consideration.”

The Halo is mounted to a chassis at three points, one in front of the driver and two on either side of the cockpit. Grosjean’s car penetrated the barrier during the crash, causing the middle rail to give way. The Halo and its foremost mounting point withstood the force of its impact with the barrier as it split apart, leaving Grosjean’s survival cell lodged within.

The Bahrain crash was one of the most extreme real-world tests a Halo has been subjected to. Temple said its interaction with other safety systems was key to sparing Grosjean from serious injury or worse. 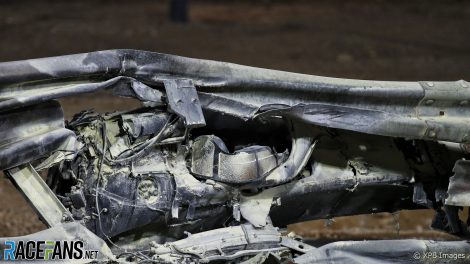 “You can’t always test for every eventuality because the angle a car might hit a barrier, for example in the Grosjean case, or have a coming together with another car, that’s highly variable,” he explained. “So you’re always looking at the best-case scenario, which will suit a number of impacts: different angles, different locations of the vehicle in relation to the object.

“What was clear was that the mounting system that was devised, when the situation arose with the Grosjean crash, that demonstrated that it was very much fit for purpose because we all saw a system – not just the Halo, but the whole vehicle and the barrier and what the driver was wearing – all coming together to create a survival scenario. 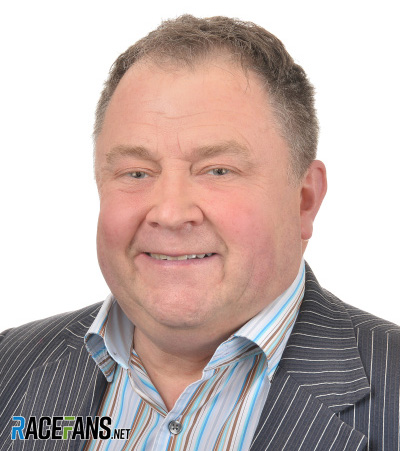 Crashes have shown Halo is “fit for purpose” – Temple

“I would hate to think what might have happened if that been a few years earlier when we didn’t have these sorts of devices on the cars. Going further back in time nobody, I don’t think, would have survived a crash like that.”

The ever-rising weight of Formula 1 cars means the Halo will have to withstand higher impact forces. The minimum weight limit will rise to 790 kilograms next year and teams are pushing for a higher level to reduce costs.

“For 2022, what we are looking at is Halo four, as they call it, and it will be a stronger device able to withstand a higher loading,” said Temple.

Lessons will also be drawn from more recent collisions, such as at the Italian Grand Prix earlier this month, when Max Verstappen’s Red Bull landed on top of Lewis Hamilton’s Mercedes in what Temple described as an “unusual” crash. 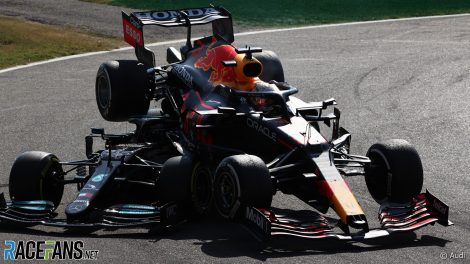 Verstappen landed on Hamilton at Monza

“There have been some that are similar, but I think you have to treat every crash as a single entity in its own right, because as I mentioned earlier, there’s different angles that you have to take into consideration, speeds, all of those things that are key factors where you look at the the science and the engineering and the underpinning maths and physics.

“With this one in particular, I think one of the key things was we saw a car absolutely on top of another car and there was no real issues. No doubt, as Hamilton expressed, he had been physically shaken up and probably mentally shaken up by it. But he was attempting, as we saw, to actually drive out of the situation.”

Crashes such as these, plus Fernando Alonso’s collision with Charles Leclerc at Spa two years ago and Tadasuke Makino’s escape from a Formula 2 crash at the Circuit de Catalunya the same year, are “testimony to the device being fit for purpose when integrated into the vehicle itself”, said Temple.

The aesthetics of the Halo had many detractors when it was first introduced, including Mercedes team principal and Cranfield honorary doctorate Toto Wolff. “He said he’d like to take a chainsaw to it” remembered Temple. “There were other very negative comments. I must admit I also thought ‘Hmm, not sure about this’.” 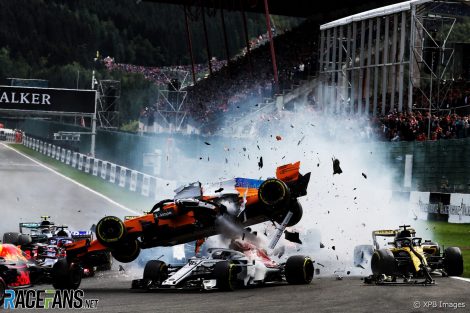 However the clear evidence of the necessity of the system and its performance has won over its critics, Temple believes.

“There was a lot of negativity as there quite often is regarding safety-related matters. We only have to go back to the late part of the sixties and remember that Jackie Stewart was given short shrift by quite a lot of people in Formula 1 and particularly journalists when he was embarking on a safety campaign that was very necessary.

“And it soon became apparent, I think, to people, that making these systems actually able to do what they’re designed to do is the most critical thing. You have to forget some of the aesthetics, et cetera, considerations and recognise that safety is paramount.”