In the round-up: Max Verstappen suspects overtaking will be difficult in this weekend’s sprint qualifying race at Monza.

Verstappen said his experience in last year’s race, when he spent much of the opening stint stuck behind Valtteri Bottas, showed why there is unlikely to be many changes of position in this weekend’s sprint qualifying race.

“It might seem like you have a lot of straights here but with these cars, it’s extremely difficult to follow. And I remember last year I was like just stuck in a DRS train. So it just all depends on the pace of the guy in the leading car, basically, of that DRS train.

“Hopefully we get positively surprised by it and maybe people will be a bit daring with strategies or whatever. But let’s see. Hopefully we don’t really need to overtake too many cars.” 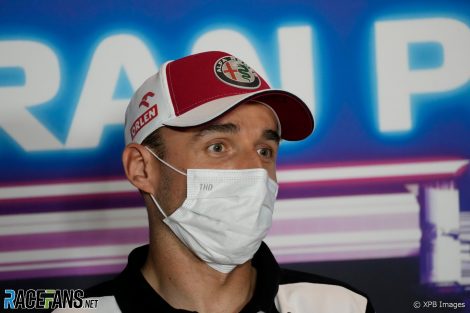 Kubica is back in the Alfa Romeo this weekend

Despite having an extra day in the Alfa Romeo in his second weekend as substitute for Kimi Raikkonen, Robert Kubica is expecting another challenging event.

“I don’t know how much easier it will be. From one point of view for, sure, having the experience of Zandvoort will help. From the other point of view, Monza is a completely different low-downforce track, you have to have confidence in the car.

“Definitely the sprint format weekend doesn’t help. I was looking forward for nice, three sessions of free practice, unfortunately this is not happening. So all this makes it a bit harder, a bit more difficult.”

Ahead of his return he re-watched onboard footage of his ELMS race at the track two months ago. “I said, well, better forget that I was here two months ago, otherwise I’ll start braking 50 metres too early.

“So you have to take it step-by-step in my position. But definitely I hope the feeling will be better in the car. Confidence is a key point, especially when you have so little time in the car. And if I will feel confident, I think it can be an easier weekend. If I miss confidence on this track, then it is a pretty tough one.”

Reminder for Predictions Championship players: The Italian Grand Prix is a sprint qualifying race weekend, so the deadline for entries is on Friday instead of Saturday.