Formula 1 drivers’ discussions with the FIA over the racing rules in light of events at Interlagos have left significant questions marks over what is considered fair racing, says McLaren team principal Andreas Seidl.

A meeting last Friday between the drivers and FIA F1 race director Michael Masi saw lengthy debate over the stewards’ decision not to investigate whether Max Verstappen had broken the rules on lap 48 of the race when he ran wide as Lewis Hamilton passed him on the outside of a corner.

Seidl, whose driver Lando Norris was given a five-second time penalty for a similar incident in Austria, said the meeting failed to clarify important questions over how the stewards interpret the rules.

“I think overall, all parties are not happy, I would say, involved, because it’s simply not crystal clear,” he said. “We all get it that it is true that each case is an individual case and you have to look into everything that is important in the case. But at the same time, I think it should be possible to have a bit more clarity.”

Norris believes his incident was treated different because the run-off on the outside of the corner was gravel, whereas asphalt was in place Interlagos’ turn four where Verstappen and Hamilton went off. He and other drivers said that was not a fair distinction. 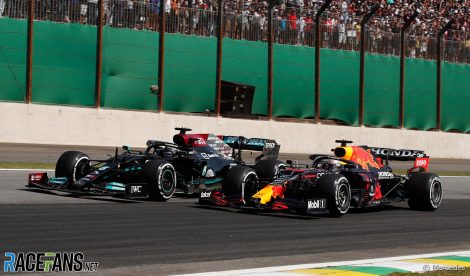 Feature: Why drivers backed Hamilton’s call for clarity after meeting over Verstappen incident

“There were some things that Lando mentioned which would have brought a bit more clarity like the difference it makes if there is gravel on the outside or Tarmac,” said Seidl, who suggested drawing up a “catalogue” of examples to help drivers understand how the stewards’ application of the rules may differ from track to track.

“It will be very important rather soon to do a good review again together with all parties involved, maybe do a document again of what is expected to be legal or not legal. Maybe it’s possible to just put up some five or six different standard cases, let’s say, for different track layouts.”

Friday’s meeting did provide “some clarifications or explanations that”, said Seidl, “for example it makes a difference if there’s gravel on the outside or not. It makes a difference, where the nose or the front axles of the cars that battling each other are going through a corner [to] who is owning a corner, who is not owning it.

“I just think [there] was still some question marks and I think at least we need to try to clarify that.”