Audi intends to confirm early next year its plans to enter to Formula 1, the manufacturer has advised the sport and its governing body, the FIA.

Audi board chairman Markus Duesmann and Audi Technical Development board member Oliver Hoffmann indicated the manufacturer is satisfied with the progress the FIA has made with new technical regulations for the 2026 power units.

F1 is seeking a new manufacturer to join Ferrari, Mercedes and Renault following the departure of Honda, whose engines will now be prepared by Red Bull. Two Volkswagen Group brands, Audi and Porsche, have shown interest, and the former has now indicated it is close to making a commitment.

In a letter sent on Tuesday Duesmann and Hoffmann told F1 CEO Stefano Domenicali and outgoing FIA president Jean Todt they believe the draft regulations offer a fair compromise for newcomers and existing competitors, as well as meeting the objectives agreed for the new power units. 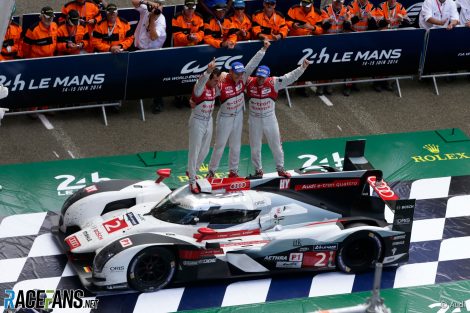 The FIA World Motor Sport Council subsequently confirmed the 2026 power units will retain the existing 1.6-litre V6 engines and increase the amount of electrical energy they can generate, while doing away with the expensive MGU-H. Power unit costs will also be capped for the first time.

The management board and supervisory board of Audi will now decide whether to formally approve its entry into the championship.

In an apparent swipe to rivals Mercedes, Duesmann and Hoffmann opened their the letter – seen by RaceFans – by congratulating Todt on what it regarded as a fair conclusion to this year’s Formula 1 championship. They referred specifically to the final lap, on which Max Verstappen passed Lewis Hamilton to clinch the title following a controversial restart, which Mercedes considered appealing against for four days before backing down.